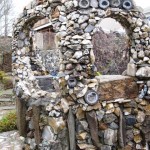 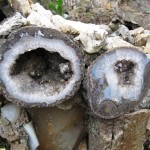 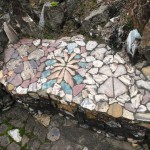 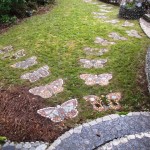 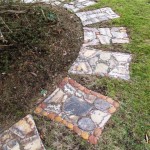 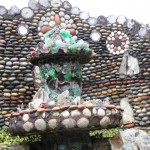 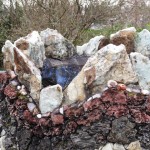 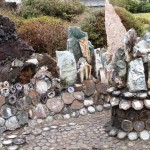 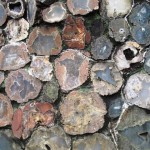 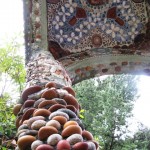 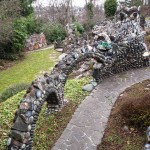 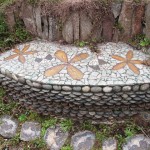 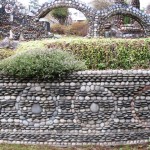 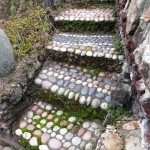 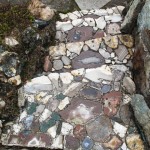 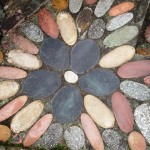 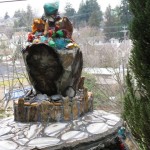 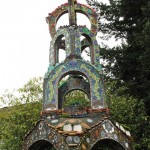 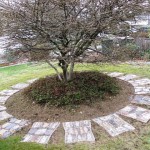 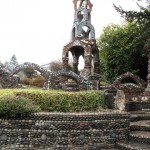 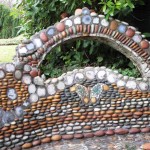 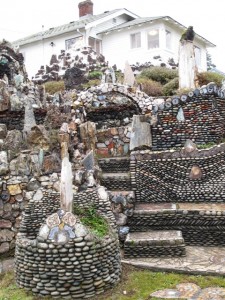 Simply mind-boggling, the detail and artistry of one man's vision.

The Walker Rock Garden has been the subject of fascination over the years. Tens of thousands of visitors — from rock and gem hounds and garden enthusiasts to folk artists and historic preservationists — have visited.

And each has an opinion about this modest West Seattle property built by Milton Walker over the course of several decades.

Now that I’m living back in Seattle, in West Seattle in fact, I was thrilled when my garden guru and friend Jean Zaputil told me there was a chance a few weekends ago to tour the property.

You see, the Walker Rock Garden, originally the home of Milton and Florence Walker, is being sold. No family members have lived in the humble white cottage for years, but one of their adult offspring and a niece recently listed it for sale and the agent, Brad Cooper, plans to regularly open the garden for admirers and anyone who wants a last chance to see this one-of-a-kind stone-sculpture installation. Visit the link above to learn about future open garden dates.

This garden began in the backyard of a residence where lived a family of five:  father, mother, two sons and a daughter. Like many similar gardens that move from private to public, this one has a back story. In spite of the various expectations that Milton’s heirs had for his rock garden, the one constant that most people can agree on is that his garden was an unparalleled artistic expression.

My friend B. McGillvray, a stonemason, artist and musician, agreed to share his first-person experiences about the Walker Rock Garden.

How do you describe the garden? 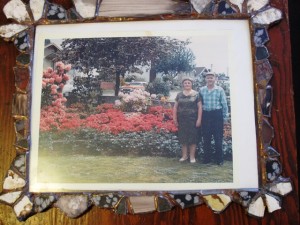 An undated photograph of Florence and Milton Walker

The garden is one of the very best examples I’ve ever seen using this type of stonework. Milton was not a tinkerer. He was a highly visionary folk artist.

And yet he worked in semi-obscurity, right?

He was part of a group of men in America who fit this profile: they started in their mid-fifties, and they worked for about 20 years. Then they died or left their work, after which, within about five years, the place falls apart, is destroyed or sold. These people were eccentric. They definitely had a vision, a mission, for building their work.   What set them apart was that they were not formally trained artists.

What are some other examples?

I would include Kubota Gardens in Seattle and Watts Towers in Los Angeles.

When did you first visit the Walker Rock Garden? 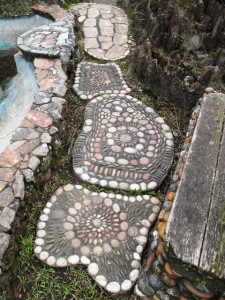 In 1989. Milton’s death a few years before had put his wife Florence in a position where she couldn’t keep up the garden on her own. It’s a really intensive place (to maintain) and she had quite a job to keep everything running and clean. She talked with me while my friend went around and took pictures. I really connected with her and she asked me if I wanted to get involved with a group that was starting called “Friends of the Walker Garden.”

What was Florence’s role in the garden’s creation and preservation?

Florence made it clear to me that Milton was the sole visionary. He did the stonework and she did the garden. Florence was a longtime gardener who was a past president of the West Seattle Garden Club.  She was very well known and very wise about gardening in an old-fashioned kind of way. She was a plain-spoken person from Eastern Washington, yet she had a very Zen-like quality in the garden. When I met her, she was around 73 years old and she wore a big straw hat and used a big walking stick.

What did Florence tell you about how Milton begin to build his vision?

[In the late 1950s or early 1960s] Milton and his son George went to Ohme Gardens in Wenatchee, Washington. Ohme looks natural (you have to look hard to see that it is man-made). Milton was impressed with the Ohme ponds and how they reflect a bright greeny-blue color. He wanted to build something similar, so he created a pond in his backyard and painted the inside blue. But he was pretty disappointed because he thought it looked like a blue bathtub. So he started adding rocks to give it scale; after that, he built three more ponds and a fountain.

So the rock garden expanded from there? 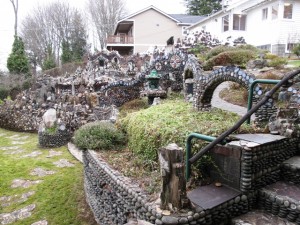 You can see the rustic "mountains" at the top right of this photo. They were said to be inspired by Washington's mountain ranges.

It’s all organic in the way it grew. The mountains, which look more rustic, are part of the older garden in the central area right behind the house. Milton was not a stonemason (he worked at the Boeing Co. as a troubleshooter), but he kept ramping up his work and improving his skills. What you see here is really world-class stone work.

When did he start doing the detailed rock-work?

In the 1960s, Milton found out that a rock shop in Oregon was going out of business. He bought all of the inventory — 11.5 tons of rock, semiprecious stones and pebbles — for $175. As Florence told me, every weekend for one entire summer, they drove down and bought stone back to Seattle. The backyard had sorting bins and piles organized by color and size of rock.

All those pieces became intricate walls, stepping stones, water features, a patio and outdoor fireplace, and an amazing tower. How did Milton actually build them?

Some of the pieces were free-formed using rebar and concrete. Others started with half-thick cinder-block built as a regular, utilitarian wall you would see anywhere, then “rocked over” (Florence’s term) with pebbles laid in row after row, or matching pieces of agate.

What is the significance of the butterfly motif?

I think Milton liked the symmetry of the butterflies. It was just a nice garden symbol. He used butterflies extensively in deluxe square-shaped stepping stones or by creating actual butterfly-shaped stones on the ground. 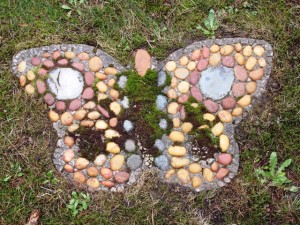 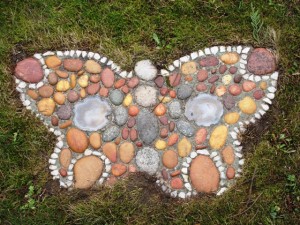 Can you tell me about the tower? 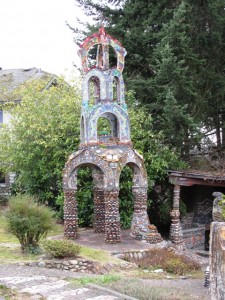 Milton erected and embellished a fanciful tower to honor America's bicentennial in 1976.

Milton called it the “Bicentennial Tower” and he gave it a birthday cake top that reads 1776-1976.

What about the semi-hidden swing wall at the lower level beyond the rest of the garden? 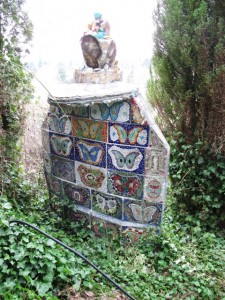 More beautiful stone butterflies appear on the "swing wall," partially hidden at the bottom of the garden.

It was one of Milton’s very last pieces, actually built over the kids’ swing set. The uprights and cross-sections became like the rebar that he built over. Milton used chips of marble, agate and chunks of slag glass.  I think had he lived, he would have continued building in that area of the garden.

Can you describe how your own work changed from your relationship with the Walker Rock Garden and from knowing Florence?

At the time I met Florence and helped her in the garden, I was working as a landscaper. It was while there that I took on more serious thought about stonework. Florence taught me how Milton made the pieces and I actually did some of the restoration of his work, such as patching and pasting. 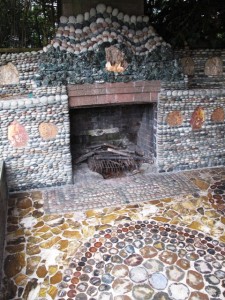 Family and friends gathered for celebrations or simple meals on the covered stone patio, complete with an outdoor fireplace.

If I’m building something now, especially my water towers, I feel as if I’m influenced by Florence. I didn’t know Milton. I knew his work, but my insights of the garden came from Florence. She had a way of being inspirational. She had great little gardening tips that I still use and think about. Her love of that garden really came through and she chose to share the most intimate things about the garden with a small group of us.

Why did you fall in love with this place?

Milton was a great artist and Florence was really the personality in the garden. I saw an opportunity to learn some big lessons and I took it. I was half Florence’s age and we lived very different lives, but it was an amazing kind of relationship. I remember her 80th birthday when we gathered on the stone patio with a birthday cake recreating an exact stepping-stone.  The little pieces of chocolate were colored to represent the pebbles.

What do you think will happen to the garden now that it (and the home) is for sale?

The garden’s ownership will move out of the family. The primal knowledge of this garden is almost lost. People are saying they hope somebody buys it who loves it and preserves it. I truly hope that someone who is motivated does buy it to preserve the garden as an entire work of art.

This entry was posted on Saturday, February 26th, 2011 at 10:08 am and is filed under Architecture, Creativity, Gardening, General. You can follow any responses to this entry through the RSS 2.0 feed. You can leave a response, or trackback from your own site.