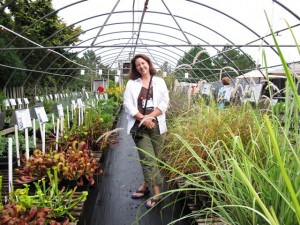 “All the world’s a nursery. And all the men and women merely gardeners.”

On Friday, Sept. 26th, the climate started cooling off, but with that came some lightish showers. Luckily, the rain held off until later in the morning, but we started out boarding buses at 7 a.m. (!) to visit to the famous Juniper Level Botanic Gardens at Plant Delights Nursery – a gardener’s mecca, nursery and botanical garden all in one.
Consider: A five-acre display garden that contains 17,000 different plant specimens. The nursery has 1,600 different plants available at any given time. Talk about over-stim! 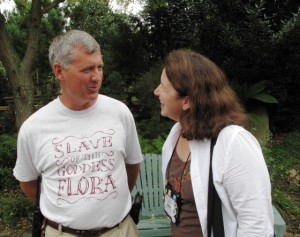 I have been a fan of plantsman Tony Avent ever since I inherited the late Stephanie Feeney’s working files from her book, The Northwest Gardener’s Resource Directory. I picked up where Stephanie left off to edit the 9th edition in 2002. That was when Internet plant-ordering was in its infancy and thousands of plant fanatics on both coasts looked forward to receiving the entertaining Plant Delights catalog from this Raleigh nursery. I got a kick out of the “price” that Tony printed on the front cover. It hasn’t changed in the ensuing years: “10 stamps or a box of chocolates.”

Here’s what I wrote about Plant Delights Nursery in 2002 (of course, never having been there, this was based on the catalog and web site):

Among the Plant Delights here is an engagingly humorous catalog, its gentle joshing bordering occasionally on the sarcastic. Earlier issues have been subtitled along the lines of “Raiders of the Lost Park” and “It’s not easy being variegated,” as this nursery boldly announces its mission to sell unusual perennials. You’ll find an online catalog of 1,000-plus offerings, including arisaema, asarum, cannas, crinum lilies, epimediums, ferns, hardy palms, hardy ginger lilies, hellebores, heuchera, hosta, lobelia, ornamental grasses, pulmonaria, Solomon’s seal, tiarella, verbena . . . and more.

When we arrived Friday morning, Plant Delights was everything I hoped it would be – and more. The crew at Plant Delights were all-hands-on-deck. Hundreds of garden writers wandered (raced?) around the property, little red or green wagons in tow, seeking unusual must-have plants in the hoop houses and absorbing design ideas in the display gardens that surround Tony and Michelle Avent’s home. The mood was at first festive, followed by a quiet sense of awe. After meeting Tony in person, I actually limited my purchase to four plants, which were shipped to me late last week, creating verdant memories that I can plant in the garden. 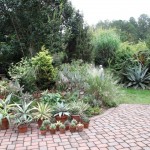 Tenders in pots come outside in summertime 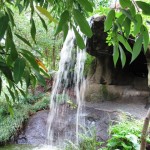 The waterfall flows from “Mt. Michelle” 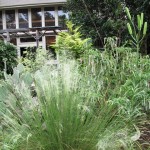 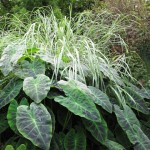 Bold plus fine – an awesome pairing 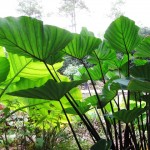 Now that I know how to shoot tropicals using back-lighting….pretty nice! 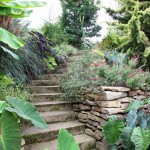 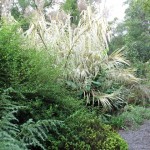 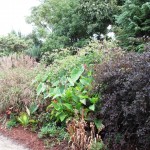 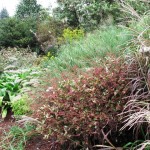 An explosion of foliage along the Plant Delights’ “driveway border”

En route back to the symposium hotel (for more lectures and panels), we stopped at the enormous Raleigh Farmer’s Market. I found two local flower farmers selling mostly zinnias, but also mixed bouquets. What charmed me most: the use of flowering purple basil as a foliage accent paired with zinnias! Local, seasonal and sustainable – you can’t get much better than that. 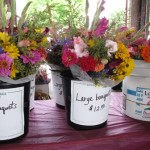 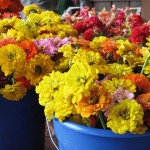 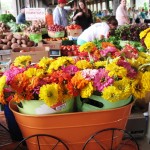 Friday evening delivered us to the famed J.C. Raulston Arboretum at NC State University. The eight-acre arboretum and botanical garden has the most diverse collection of cold-hardy, temperate-zone plants in the southeastern US. I was torn between meeting new plants and meeting new friends, as I wandered the garden with writers, photographers and brilliant communicators. A traditional Southern dinner fed us well. Like all the public gardens we visited, I yearned for more time. Here are some impressions that caught my eyes: 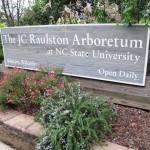 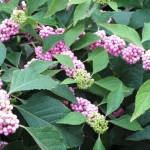 An autumn-blooming form of callicarpa ~ saw it in several gardens, including here at JC Raulston 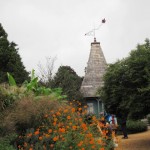 “The Necessary,” JC Raulston gets the prize for the most fanciful shed-like bathroom facilities! 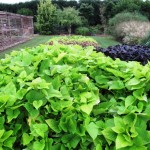 Gotta love all that foliage! 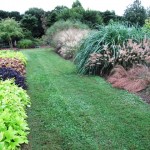 More of the trial garden at JC Raulston 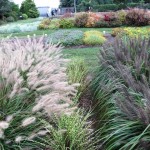 This entry was posted on Wednesday, October 7th, 2009 at 8:49 am and is filed under Gardening, General, Landscape Design, Plants. You can follow any responses to this entry through the RSS 2.0 feed. You can leave a response, or trackback from your own site.