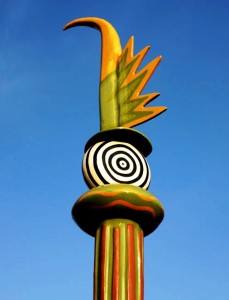 Leslie's Autumn-inspired piece is topped by a fabulous flame

There’s new artwork at the Los Angeles County Arboretum & Botanic Garden  and it’s as colorful as the peacocks strolling around the grounds.

Codina, who lives and works in Ontario, creates whimsical stacked towers of color, pattern and form. Her hand-built earthenware “beads” are fired in vibrant glazes, eye-catching patterns, and exaggerated organic shapes that suggest thorns, leaves, flowers, tendrils and bugs. Each piece has a hole at its center so it can be slid over a metal rod in whimsical, mix-and-match designs.

“They are my crazy interpretation of what’s already in the garden,” she says.

The artist sells her $400-$650 garden sculptures at local fairs, including the Arboretum’s L.A. Garden Show each spring. She proposed donating a permanent, site-specific sculpture several years ago, but it wasn’t until after renovations on “Garden for All Seasons” started in 2007 that Tim Phillips, the Arboretum’s acting CEO, agreed and suggested the site. Codina worked with garden curator Darlene Kelly to come up with the four-season theme and determine where the pieces would be installed. 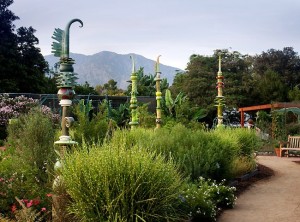 The four spires represent the garden's beauty in all four seasons

At 9 to 15 feet high, the quartet of spires has more than 50 individual “beads” and is larger than Codina’s typical work.  “The scale is huge – the base shapes are the size of a beach ball,” she says. “When we put them all together, they look hugely impressive. They complement the garden and the garden complements the sculpture.”

The sculptures follow the seasons, both in size and color. “They gain height as they ‘grow’ from winter through the rest of the year,” Codina says. Purple-and-sage designs symbolize winter; spring is a full spectrum of green colors; summer has hot pinks, oranges and greens; and fall is depicted with mustard yellow, olive green and red hues.

Unlike Codina’s smaller pieces, which often have branch-like armatures, the sculptures at the Arboretum are made of mostly cylindrical shapes. “I made them very peacock-safe,” says the artist. “I didn’t want to give the peacocks any place to perch.”

This entry was posted on Thursday, August 6th, 2009 at 9:21 am and is filed under Creativity, Landscape Design, Playfulness. You can follow any responses to this entry through the RSS 2.0 feed. You can leave a response, or trackback from your own site.