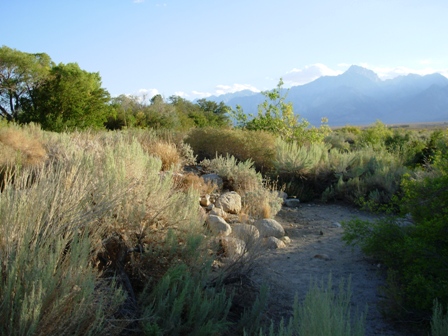 A late September afternoon along Independence Creek, with the Sierras in the distance, at the Mary DeDecker Native Plant Garden, Eastern California Museum, Independence, California

I’m paraphrasing here, but that saying about how we understand the future if we learn from the past came to mind when I attended part of the California Garden and Landscape History Society’s annual meeting.

The conference was held in Lone Pine, California (about 250 miles north of my home on Ventura Co. – toward the high desert, the Eastern Sierras, and the west entrance to Death Valley). Its theme: “Spirit of Landscape: California’s Lower Owens River Valley.”

The event attracted me because dear friend and writing mentor Paula Panich was on the program to give a lecture about the writer and pioneer woman Mary Austin. She titled her talk: “Beauty and Madness and Death and God: Mary Austin’s Land of Little Rain.”

Why do we pursue such impetuous, insensible decisions as to drive 250 miles on a Saturday morning in order to get to a friend’s 1-hour lecture? It’s actually easy to explain, because the fabric of my life is woven with such spontaneous decisions. If I didn’t make these sudden journeys (to fly to Seattle for Braiden’s book-launch; to take the bus to the end of the line and visit Skip and Charles in Orient, NY; to drive to the mountains for Paula’s birthday celebration) what else would I be doing anyway? Shopping for groceries, paying bills, folding laundry? 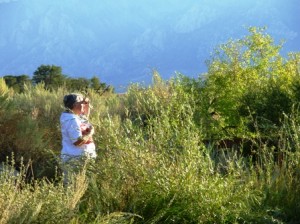 We often remember the glimmering highlights that punctuate the rough textures of everyday life; they are the peaks that even out the valleys, comforting us. Don’t get me wrong. Usually, I love my life and the choices I’ve made. I float through it observing all the blessings I have with my marriage, my children, my home, my safe existence. But sometimes . . . different seasonings need to be tasted. Gardens, friends, excursions…provide the unexpected flavors to our regular diet of normalcy.

I arrived with 10 minutes to spare and slipped into the ancient American Legion Hall in Independence (14 miles north of Lone Pine, adding another 15 minutes to my ETA). Judy Horton, LA landscape designer extraordinaire, fellow writer, and co-organizer of the conference, was making some remarks. Whew. I made it! Who should I see, with a vacant seat next to him, but my dear friend Richard Turner, editor of Pacific Horticulture magazine. I thought I was crazy driving 500 miles round-trip for this conference, but he drove about 700 miles round-trip from Berkeley, so guess I’m not singularly crazy; we’re kindred spirits after all! I slipped in next to Richard and, with a huge grin on my face, settled back and listened to Paula’s storytelling work its magic. 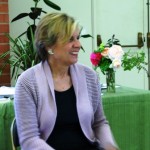 I loved Paula’s description of herself. “I am a writer and thinker about gardens.”

During the past year, she immersed herself in the biography of Mary Austin, a young woman from the Midwest who came to California when an older brother homesteaded here in the late 1800s. Austin wrote The Land of Little Rain in 1903, one of the first works about the California Desert. Paula will soon post her conference remarks on her web site, but for now, I will give you a little highlight into the life and observations of the subject of her lecture:

. . . Mary poured her inner life – heart, love, spirit, and attention – into the landscape and the people of the Eastern Sierra. In her hymn to the desert, The Land of Little Rain, her exquisite language gives life to an Earth-centered spirituality and her view that landscape is essentially feminine: fertile and bountiful, seductive and bewitching. “By making the desert powerfully female,” writes Austin biographer Esther Lanagan, Austin sees a “. . . land that ravishes all who would traverse her, causing them to lose themselves. . . ”

. . . For a half-century, her books were forgotten. In the 1980s, when eloquent voices of Western writers cried out for conservation and environmental protection of land and water, her work was resurrected. Austin is now viewed with reverence as a pioneering feminist and eco-feminist; The Land of Little Rain, in the words of historian Lawrence Powell, is considered “the ripest, richest book of the many she wrote.”

[from an essay by Paula Panich, “(Still) The Land of Little Rain: Mary Austin and the Eastern Sierra,” published in the July/Aug/Sep 2008 issue of Pacific Horticulture] 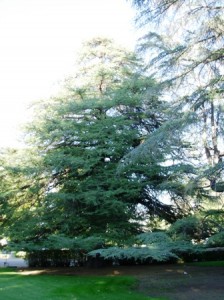 Following Paula’s lecture and a panel discussion with her fellow presenters, the group of about 50 participants took a walking tour through historic Independence. Nancy Masters of the Independence Civic Club led us down Main Street (California Hwy 395).

We stopped at the Inyo County Courthouse, a Neoclassical structure built in 1922, listed on the National Trust for Historic Preservation. Stately trees circle the building, creating an arboretum-like setting; it is presumed that they are contemporaries of the 85-year-old courthouse. Cedars of Lebanan, Deodar Cedars (see one, right), and Giant Sequoias stand as tall or taller than the massive courthouse architecture. These conifers and the adjacent row of Cork Elms reveal the ruggedness and adaptability of non-native trees to this dry, desert environment. Awesome is about all I can say of their beauty.

A side street led away from the Courthouse through a neighborhood (with no stop signs, a companion observed). We arrived at the Eastern California Museum and Mary DeDecker Native Plant Garden. The museum boasts outstanding exhibits dedicated to the rich natural and cultural history of the Eastern Sierras. Displays portray the construction of the Los Angeles Aqueduct; mountain climbing; the Manzanar War Relocation Center; and Paiute and Shoshone artifacts (a fine collection of Native American baskets, bead work and garments).

With dusk less than an hour away, I made a quick visit to the museum and then dashed to the native plant garden, a project of the Bristlecone Chapter of the California Native Plant Society. The season to visit this garden is springtime, when many native perennials and wildflowers add sparkle and color to the informally-planted borders (the garden is known for its collection of Penstemons, Eriogonums and Salvias). However, there is an appealing serenity to visiting a garden during its quiet period when dormancy has begun to creep around the edges. 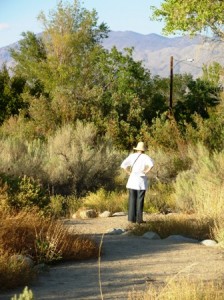 The garden honors Oklahoma native (1909-2000) Mary DeDecker, who moved to the Independence area in 1935 with her husband and two young daughters. Mary’s interest in plants grew as the family explored the mountains and valleys of their new home. She taught herself botany and began sending specimens to botanists at academic institutions around the country who wanted to study plants of this remote place.

Mary collected, identified and preserved thousands of plant specimens in her private herbarium in her husband’s garage. She discovered several plant species new to science, including a variety of buckwheat. It was later discovered to be a new genus and was named in her honor: Dedeckera eurekensis (July gold).

The late afternoon light cast its tawny glow on the mini habitats clustered in the DeDecker Native Plant Garden. I was awestruck by the quiet, but powerful scene of plants that have adapted over centuries to thrive and reproduce in this extreme environment.

Later, I thought fondly of the women who, for me, have redefined my “view” of living in California. Paula, for bringing me here. Mary Austin, for her powerful words that describe a raw, alien place as something “beautiful.” And Mary DeDecker, for valuing the common plants of this wild place, and in some cases, even giving them a name.

This entry was posted on Friday, October 10th, 2008 at 11:36 am and is filed under Book reviews, Creativity, Spiritual Practices, Writing. You can follow any responses to this entry through the RSS 2.0 feed. You can leave a response, or trackback from your own site.