Gaze out and find peace 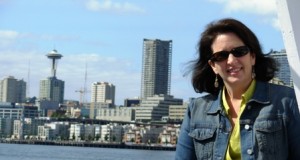 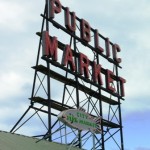 The boys and I returned to our beloved Seattle for a few days last week. It was all we could do to keep from screaming: “We Love Seattle” to one another.

Is it the people here, the longtime friendships, who make our love for this place feel so much deeper than our present home?

Or is it the appearance of green foliage and needles – everywhere we look – or the moisture in the morning air, the mesmerizing pattern of clouds against the blue-gray sky, the fresh sensation of breathing, smelling, absorbing the weather here in the great Northwest?

The answers aren’t easy to articulate. It’s more of a feeling, a sense of comfort, of familiarity.

So here is a travelogue, of sorts, to share and celebrate our brief visit: 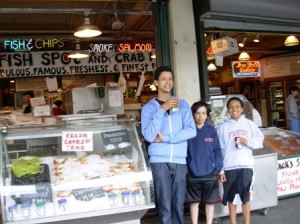 Ben, friend Sean, and Alex pause for a photo in front of Jack’s Fish Spot

Pike Place Market: We enjoyed a tasty lunch at Jack’s Fish Spot — the best cooked-to-order fish’n’chips around, although I ate Jack’s scallops’n’chips, a personal favorite. 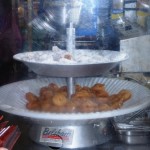 This was followed by a stop at Daily Dozen Doughnut Co., another must-have Pike Place treat. I prefer a half-dozen of the minis, dropped into a brown paper lunch bag, sprinkled with cinnamon-sugar and shaken vigorously. Eat while still warm. Even better with a glass of milk. 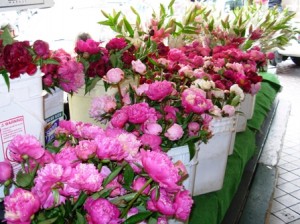 Next, a lustful journey through the stalls – my visit coincided with PEONY SEASON – yeah! Oh, how I miss my peony plants. I actually love these flowers best in their nascent stage, balls of beauty about to burst. The five-for-$10 bunch offered at my local (Southern California) Trader Joe’s is so far removed from the peony plant that I kind of feel like a cheater when I buy it.

It’s quite possible that my love for Seattle can be summed up by my passion for growing Paeonia sp.  In Mt. Baker, a neighborhood where we lived from 1989 to 1997, my neighbor, an elderly Japanese man who had lived in his home for decades, tended to eight peony plants growing in his garden for just as long. They bloomed so joyfully and I was the lucky recipient of their beauty, looking at them every time I walked outside my front door. And I loved the way he took care of his plants. No dividing or pampering for these robust flowers. No, he just cut off the aging foliage in the fall and piled stems and leaves of each individual plant onto its crown. The vegetation protected the crown from winter frost and moisture; while the foliage decomposed, it provided nourishment to the peony plant, allowing it to re-bloom the following spring. 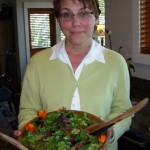 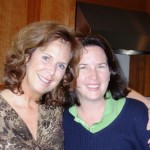 Dinner with girlfriends, including our hostess, Jan (with me, right), who housed the boys and me for 5 days, sharing her awesome, entirely comfortable home with us. Friend Jean (left), my gardening mentor for so many years (20?) tossed up a fresh salad with edible calendula from her garden. Joy!

We “gazed out” upon Lake Washington, the object of our affection for so many years, and the experience fooled my boys and me into thinking we were home. As Alex put it: This is home. But we have a house somewhere else. Clearly, for him, our transition to California living isn’t complete. Leave it to an eleven-year-old to speak out loud what the rest of us can’t quite articulate.

Later, we took the Water Taxi from West Seattle to the Seattle Waterfront – more PURE SEATTLE!!! We arrived at the waterfront and hustled over to the Seattle Aquarium, a family-favorite for more than 15 years. . . The aquarium is newly renovated, with a brand-new facade on Alaska Way. It was pretty funny when my 16-year-old turned to me and commented: “It seems smaller than I remember.” His own memories are linked to his visits as a youngster, when the fish, otters, seals and octopuses looked and felt larger, of course!

Our scheduled departure early Saturday morning coincided with chaos at the United ticket counter. Too many people leaving Seattle at once (And someone tells me there really is a jet fuel crisis? you’d have never known by the crowds at Sea-Tac!).

Getting bumped from our flight and re-booked on another airline five hours later could have been a big disaster. But our friend Anne took us back to her house, only a block away from our former home, and cooked up a hearty breakfast, allowing us an unexpected gift of a final morning in Seward Park before we flew to Burbank. 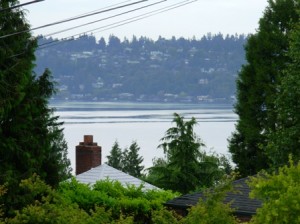 In true June-in-Seattle fashion, the misty morning air (nearly tangible) hung over Lake Washington. The kids and I walked down the hill on our familiar journey to the lake’s edge, where we searched for flat stones to skim across the calm surface of the water.

As we neared the bottom of Angeline Street I noticed a new park bench installed along the running-strolling path. Perfectly situated to offer its occupants a pleasing view of the lake, the giant conifers in Seward Park, and the little cove dotted with boats, the presence of this bench pleased me. A plaque at its base indicated it was added as a memorial in 2007.

Like a little benediction, the plaque offered a few lines, it seemed, just for us: Gaze Out and Find Peace.

Amen. To whomever placed this bench and left this message, thank you.

This entry was posted on Tuesday, June 24th, 2008 at 12:10 pm and is filed under Creativity, General, Playfulness. You can follow any responses to this entry through the RSS 2.0 feed. You can leave a response, or trackback from your own site.

5 Responses to “Gaze out and find peace”