The wacky world of Jeff Shelton and his sheds 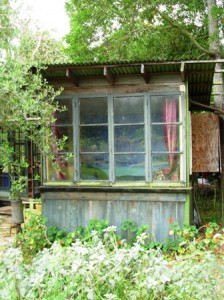 The “Geranium Hut,” named so for the cluster of pelargoniums growing at its base. Designed and built by Jeff Shelton

Santa Barbara architect and shed-maker Jeff Shelton appears in my new column for the June issue of 805 Living, a local style magazine based in Westlake Village, California. The column is called ‘In the Garden.’ Not too imaginative, I know. I voted for ‘Deep Roots,’ but I think my editor considered that too esoteric. So like a million other gardening columns, we’re calling ours: ‘In the Garden.’

A blog reader tipped me off about Jeff and his penchant for designing and constructing cool little buildings, sending along a link to the “Huts” section of Jeff’s web site.

When I contacted him to schedule a visit, we had to work around Jeff’s grueling schedule: He was taking time off from his architecture practice between 10 a.m. and noon, four days a week, to teach ultimate frisbee at a middle school. Despite a demanding professional life, Jeff knows how to enjoy the moment. And, of course, this is why he loves creating his little huts.

If it’s possible for someone to be both intense and mellow, Jeff is it. His body language is relaxed, but I can tell his mind is working nonstop. Definitely an out-of-the-box architect, Jeff allows artistry and, dare I say, whimsy, to have a seat at the design table.

“You certainly don’t need skill to build these,” Jeff insisted, describing his structures as something a Dr. Seuss character might erect. While touring me around Oakleigh, his 12-acre family compound in Montecito that dates back to the 1890s (when it was a boarding school for boys), we stepped inside several of the structures, including his wife Karin’s art studio, shown here: 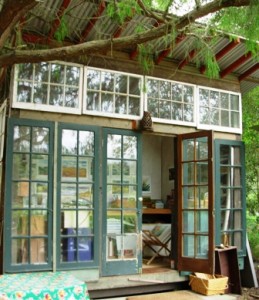 Using whatever was on-hand, working at his leisure during weekends, Jeff fashioned this light-filled room where Karin paints and draws. He appropriated and reassembled old windows and doors, hammered reclaimed fencing to create a cantilevered “porch” for their eldest daughter Elena’s shed, and mounted a mural-painted piece of plywood (originally used for the backdrop of a sixth-grade play) to form one wall of a shed called the Geranium Hut.

In appealing contrast to the luxury world of Santa Barbara and Montecito, Jeff’s little buildings illustrate his Less is Better philosophy:

“People miss out on coziness when their home turns into a status symbol,” Jeff points out. “My job is to try and reduce the size of a project.”

Sometimes, like the forts and tree houses of one’s childhood, the shed “is the answer for the moment,” he says. 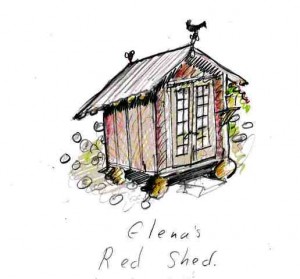 In addition to sharing this illustration of Elena’s Red Shed for use with my column, Jeff gave me a selection of his hand-drawn shed plans. He sketches the dimensions and construction details, makes photocopies, and sells a set of plans for $5. One two-page set of plans, titled “Gardener’s Hut,” includes front, side and back elevations for a cozy, 192-square-foot structure with a tiny loft and a sloped, shed-style roof. 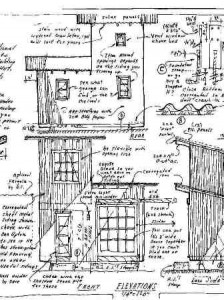 The architect’s design notes appear in the margins, with tips such as “check dumpsters on large construction sites for good stuff,” “design around windows and doors that are available” and “stain wood with watered down latex; 1 gal. will last for years.” An area beneath the shed’s raised foundation is labeled: “place for dog to sleep.”

Often, Jeff helps would-be shed builders to find sources for recycled windows, salvaged wood or other pieces and parts. He is the ultimate scavenger-builder who sees a good use for materials otherwise destined for a landfill. “Save it and use it,” Jeff proclaims.

A note about writing for my “local” style publications, 805 Living magazine. Our monthly magazine has distribution in Ventura and Santa Barbara Counties, so this new gig allows me to explore in my new backyard. I’m meeting great garden designers, architects, plantsmen and women, and I feel like I’ve hit the jackpot.

In addition, editor Lynne Andujar pretty much lets me run with the ideas I find exciting. I am grateful for the freedom she gives and it reminds me of working with a few other trusting and supportive editors in my past, including Melanie Munk at The Herald and Giselle Smith at Seattle Homes & Lifestyles.

When Lynne and I met at a press luncheon last December, we discovered that we have a common past: We both worked for Seventeen Magazine early in our careers. I’m sure she was there more than a decade after I was, but even still, there is a common language for anyone who’s done that gig. Not exactly the stuff of “The Devil Wears Prada,” but kinda.

This entry was posted on Thursday, June 12th, 2008 at 6:27 pm and is filed under Architecture, Creativity, Playfulness. You can follow any responses to this entry through the RSS 2.0 feed. You can leave a response, or trackback from your own site.