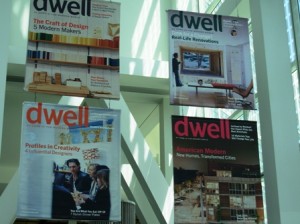 My pals at Monrovia made sure to add me to the press list for dwell Magazine’s first-ever design symposium in Los Angeles (I think the two previous conferences were held in the San Francisco Bay Area). 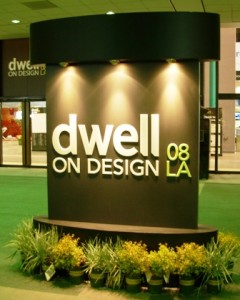 Dwell on Design’s hip graphics and giant magazine covers filled the LA Convention Center. The addition of plants, provided by Monrovia, helped soften the ultra-modern flavor of the event and infuse the setting with something living and green.

The four-day conference included panel lectures, home tours and a trade show featuring the best contemporary and sustainable resources for the home and beyond. I missed Thursday’s panels, but met up with Nan Sterman to attend some of Friday’s panels and the trade show.

Having spent many hours of my professional life uncomfortably confined to stiff, industrial-grade chairs while listening to lectures, I was thrilled to see that conference sponsor Lounge22, a Los Angeles-based furniture company, provided v-e-r-y cushy sofas for those of us smart enough to show up on time and get a place near the front of the room. Sleek, low-profile sofas, upholstered in white or black leather, made sitting still an easy (and luxurious) endeavor. Very classy, folks. 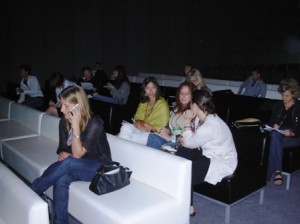 I asked myself, why do I care about hotel and restaurant design? I haven’t written about the hospitality biz since I was a reporter covering the hotel beat for Puget Sound Business Journal back in the late 80s-early 90s. But I remembered that my experiences reporting on hotel and restaurant trends strongly influenced and shaped my design sensibilities – and helped train my eye to look for creative design influences everywhere around me. I’m pleased to say, it was worth my time to slouch into the white leather sofa, stretch my legs and listen to the presentation.

Of the three panelists, it was Theresa Fatino who blew me away. She has been described as having a sixth-sense for observing cultural tastes and trends. Fatino is a passionate keeper of the faith for her current project, SLS Hotels. As a project of SBE Entertainment Group, the first SLS Hotel is slated to open later this year in Beverly Hills (Las Vegas and South Beach, Florida, properties are also in the works).

You may ask yourself: What does SLS mean? I finally found a clever reference to the acronym on the company’s web site: Some Little Secrets. The hotel is pursuing a high-touch, but understated niche in the crowded hospitality market.

Fatino is the organization’s key collaborator with master designer Philippe Starck on its hotel, restaurant and lounge concepts. In addition to SLS Hotels, these include the Katsuya restaurant brand, recently-opened S Bar and a yet-to-be-named upscale supper club on the Sunset Strip. She has an impressive resume that includes a fine arts degree from Syracuse University, followed by design positions with Ralph Lauren, Pottery Barn and the W Hotel.

Fatino described the intricate development of SLS Hotels’ “brand” management message, summed up by a list of “emotional touch points.” I might be missing a few of them, but here are the themes I quickly jotted down during her lecture:

To me, these ideas are symbolic of broader consumer trends. Far-reaching, such ideas aren’t limited to the hospitality industry. They serve a kind of marketer’s shorthand to describe and highlight the present mood of popular culture, media (and media consumption), technology, product design and art.

Fatino illustrated a few of the ideas:

pre-Googling: This refers to our reliance on the Internet as a “preparation” tool. For example, how many of us “Google” someone in advance of a planned meeting (this could be a work-related contact or even someone you might encounter at a dinner party)? We’re addicted to Google as a verb!

Online-oxygen: “How many of us wake up in the morning and before we do anything else, we reach for our Blackberry?” she asked. This habit equates our need to breathe oxygen with our need to constantly access our online lives; it is shaping design decisions made for the new hotel. She illustrated this concept with a slide of a man seated in a Zen garden, using his laptop. Hmmm.

Internal reward: There is a need to balance our “wired” lifestyle with an “unplugged” response. “We need to rejuvenate, nourish the mind, replenish, engage in spiritual activities,” Fatino suggested (at this point in her lecture, I leaned over to Nan and whispered: We all need a Stylish Shed – that will provide ample internal reward, the antidote to everyday insanity!)

After identifying these emotional touch points, Fatino cited a list she called the “catalog of experiences” the new hotel will offer. I suspected her list would be geared to customers willing and able to pay for this level of luxury. But surprisingly, many of them are emotional experiences rather than tangibles. And in a way, that’s what’s so appealing about these ideas. These experiences seem to require an attention to detail rather than a big budget. Here they are:

The challenge, said Fatino, is to “translate the ‘experience’ into a physical product,” but to do it with sincerity and integrity (people can easily spot a “copy job,” she says).

For example, the hotelier has decided to eliminate little plastic bottles of shampoo and lotion and replaced them with high-quality, natural body products in large, glass, refillable bottles. Not only is this environmentally smart, it is a small gesture that communicates the desired guest experience. Some are tangible, such as warm, fuzzy-feeling Egyptian cotton towels or “bronze-tinted” lighting flattering to the face. Others are intangible, such as how guests’ children and pets are treated. “We know when to create a surprise and when to whisper,” Fantino explained.

HOW WILL HEARING THIS NEW INFORMATION CHANGE THE WAY I OPERATE?

I think I will come up with my own “emotional touchpoints” and “catalog of experiences” to describe how I want to live, conduct my life, work, relationships and immediate surroundings. I’ll be tracking SLS Hotels as they open and begin to execute Fatino’s vision.

I have two more reports to post, but this is already too long. The next one will highlight Dwell Outdoor, the exhibit area featuring landscape and garden design ideas and products. That will be followed by a report on a Sustainable Interiors panel.

This entry was posted on Tuesday, June 10th, 2008 at 9:18 pm and is filed under Architecture, Creativity, Gardening, Shed Glossary. You can follow any responses to this entry through the RSS 2.0 feed. You can leave a response, or trackback from your own site.

One Response to “Dwell on Design 08-LA”