Living large in 50 words or less

I thought my big foray into the glossy, over-sized, luxury magazine market here in LA would be exciting. Instead, it kind of left me underwhelmed.

The assignment, by way of a referral from an editor friend whose work I really admire and who handed me off to write for his design deputy, was to report and write three 150-word pieces for Angeleno magazine’s “Living Large” section in its March 08 issue. Measuring 10-by-12 inches, the 300-page issue arrived in my mailbox today. Wow, Ryan Philippe is on the cover looking broodingly handsome. 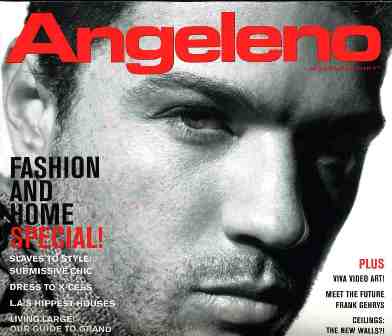 Quickly, I flipped through the first two hundred or so pages, past full-page ads featuring the beautiful people wearing clothing by Armani, Banana Republic, Dolce & Gabbana and Chanel. Where was my big story?

FINALLY. I found the six-page article, chock-full of mini-stories (and I mean mini – you really could call them “sentence stories”) about everything big in architecture, furnishings, interiors, oh, and even plants. Yes, my dazzling prose was boiled down to a caption-length block of text. Only two of the three items I wrote made the “cut,” so to speak. They really don’t resemble anything I composed. 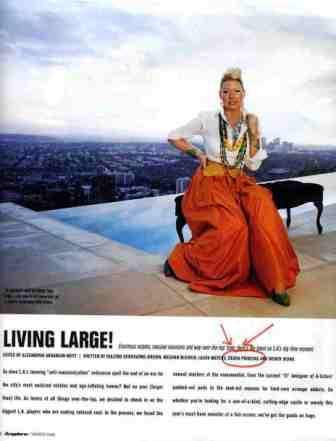 if you look veeeerry closely, you can see my byline, circled above

But the good news is that I can publish my original pieces here, thanks to the freedom of blogging. I think you’ll like reading them. One is about super-sized cactuses and succulents; the next one is about how to grow an instant-gratification hedge; and the final one – my favorite – is about Berylwood Tree Farm, a magical nursery owned by Rolla Wilhite, a man who has been growing trees for 40 years. This is the one short story that Angeleno cut. And you know, I’m actually relieved, because Mr. Wilhite is a visionary – and he deserves a HUGE story of his own in a publication that will give him his due. And I intend to write it myself.

Read on for a revealing comparison between how the stories began and how they ended up in print:

STORY ONE (the original):

“It usually involves some kind of big equipment like a forklift or a crane,” she deadpans. “We sold a saguaro cactus that had to be delivered by helicopter.”

The scale and size of estate gardens call for big impact, which you can achieve with a pair of 4-by-4-foot variegated century plants (Agave americana ‘Variegata’) displayed in large urns. With cream-and-blue-green streaked blades forming a perfectly symmetrical (but wicked-to-the-touch) rosette, you can expect to spend $300 to $600 per plant.

How STORY ONE looks in print:

Fortress mentality: When Suzanne Rheinstein, interior designer and owner of Hollyhock, the West Hollywood design and antique store, wanted to double the size of her Hancock Park backyard for her daughter’s wedding, she removed a wood fence and ripped out an old eugenia hedge in order to “borrow” her neighbor’s yard for the event (that’s a nice neighbor!).

“When (the wedding) was over, we knew we had to put a hedge back, but I didn’t want to use eugenia again,” Rheinstein explains. “Instead, I found espaliered podocarpus trees that were eight feet high and wide, with wonderful dark green foliage.”

If you plant it in a straight line, just about anything – from tree ferns and ficus to holly and bamboo – can be considered a hedge. People want hedges for privacy, enclosure, and to screen objectionable views. Euphemistically called a “living fence,” there’s something kinder about erecting a green hedge rather than a solid wall between you and the neighbors.

How STORY TWO looks in print:

STORY THREE (the original piece which was dropped from Angeleno’s roundup of all things big):

Trees are the answer:There’s nothing like a 20-foot-tall (or larger) shade tree to give the impression of largess. Use one as a focal point or group several trees to form a bosque or grove – and your landscape will feel instantly established. For mega-specimens, landscape architects and designers here and beyond call Rolla Wilhite, tree purveyor extraordinaire and owner of Somis-based Berylwood Tree Farm. 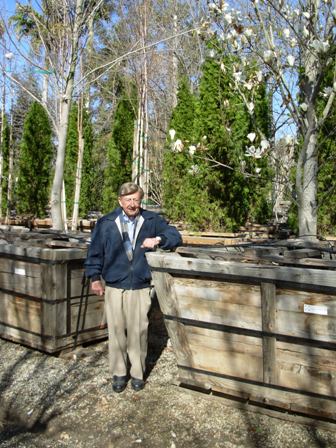 A UCLA-trained landscape architect and horticultural pioneer who 40 years ago began planting saplings at his 25-acre nursery, Wilhite supplied trees for the Bellagio, Getty Center, Getty Villa and the Smithsonian. While he won’t reveal his most-famous clients, Wilhite slyly hints at the marquee names who have shopped among his verdant rows of stately redwoods, graceful magnolias and tufted blue atlas cedars trained into espaliered forms (Hint: just last month he helped a certain pregnant Oscar-winner choose mature live oaks for “one of her houses.”)

Known as the Rodeo Drive of trees, Berylwood is open only to architects and contractors. Wholesale trees have three- to five-figure price tags. You can’t access an online list of his 8,000 trees (Wilhite keeps that inventory in his head), but staff will email photos of specific varieties upon request.

Then there’s the waiting: After you select a mature, field-grown tree, it may take six months to two years for it to be pruned, dug and boxed for delivery so as to avoid transplant shock. “These trees are my children,” Wilhite confides.

It’s back to the world of full-length stories for me. I think my Hollywood journalism days are over.

This entry was posted on Friday, March 14th, 2008 at 9:29 pm and is filed under Creativity, Gardening, General, Writing. You can follow any responses to this entry through the RSS 2.0 feed. You can leave a response, or trackback from your own site.

3 Responses to “Living large in 50 words or less”