David Fross, founder of Native Sons wholesale nursery in Arroyo Grande, CA, coauthored Ceanothus (Timber Press, 2006) with Dieter Wilken, botanist at the Santa Barbara Botanic Garden. The 272-page book is a tribute to Fross’s lifelong love affair with the blue-flowering woody shrub. The seduction is evident in his text:

“Each spring, tints and shades of azure, cobalt, indigo, and cerulean surface in the chaparral of California as if to offer a new name for the Golden State. Madder blue, milk-blue, and lavender, and then there are the blues of the sea — aqua, ultramarine, and a hue found only in the Sea of Cortes. The genus includes plants with flowers of each of these colors, and more: cyanine, sky blue, and the flinty hues of slate.”

According to Fross, who divides this plant monograph into two sections — “Ceanothus in the Garden and Landscape” and “Ceanothus in the Wild” — the English are much more creative than North American gardeners in planting ceanothus, using it as a hedge, groundcover, specimen tree, or climbing/espaliered embroidery on the face of an ancient stone building. “In London, they use ceanothus everywhere,” Fross proclaimed, saying he once counted 17 ceanothus plantings between his London hotel and the train station.

Luckily, it’s not too late to start using the hundreds of species and cultivars outlined in Ceanothus. For a guide, I’ll turn to page 125, Fross’s useful selection reference. He suggests cultivars for good garden tolerance, covering banks, groundcovers, informal hedges and screens, specimens and small trees, small garden spaces, seashore and shade. Plus, he lists eight variegated cultivars; I am a sucker for variegated foliage (I inherited an early specimen of Ceanothus thyrsiflorus var. griseus‘Diamond Heights’ from my pals at Seattle’s Elisabeth C. Miller Botanical Garden in the early 2000s, and enjoyed the awesome gold-and-green chevron-marked foliage in a glazed Chinese-red container before transferring the plant to the front slope of my Seattle garden, where I hope it still lives). Fross also lists summer flowering ceanothus, plants with large inflorescences, fast-growing cultivars and white blooms.

In Seattle, ceanothus has the reputation for being short-lived and finicky (I remember early on over watering ‘Julia Phelps’ only to watch her succumb from too much of a good thing). Now, I’m excited to try this “classic California genus” in my Zone 10 landscape. One spot on my must-visit list: Leaning Pine Arboretum, California Polytechnic University in San Luis Obispo, where there is an extensive display of California native ceanothus (Fross directed the development of the California Collection there).

One of the other nifty features at the SoCal Hort meetings is “Plant Forum.” Like an old fashioned garden club activity, members bring in plants, cuttings, flowers, fruits and seeds to just show off the bounty of their own backyard. I love the amazing variety of samples on display – most of which are completely new to me. 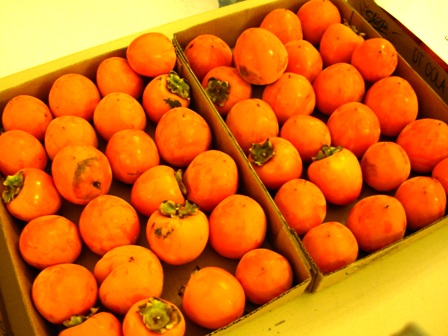 Last night, a highlight was one member’s box of just-picked Hachiya persimmons, lined up like perfectly-formed eggs in a crate. The skin color – difficult to describe, but you know the word persimmon conjures up visions of something spicy, exotic and rare….and that’s how these delightful fruits appear to me. They are as vivid as a setting sun over the Pacific Ocean. Having lived in SoCal from 1967 to 1970 when I was young, I have strong memories of my midwest Mom not knowing what on earth to do with the persimmon tree in our backyard. She found one recipe for persimmon cookies. They tasted chewy and were seasoned with cinnamon and other spices (ginger? allspice? nutmeg?)….I’ve asked Mom to find the recipe. Now I have four delicious-looking fruits in my kitchen window, awaiting the transformation with said recipe into cookies for my own children.

A few other specimens from fellow SoCal members got me excited, too:

This entry was posted on Friday, November 9th, 2007 at 11:42 pm and is filed under Book reviews, Gardening, General. You can follow any responses to this entry through the RSS 2.0 feed. You can leave a response, or trackback from your own site.