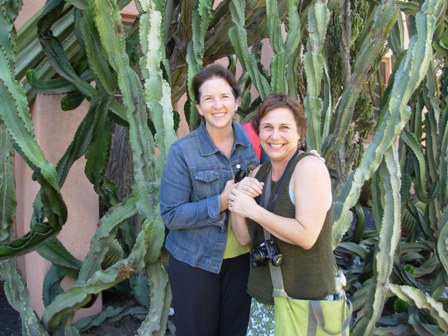 Debra and Lorene – in front of the Euphorbia ingens

Friday, October 19th was not only a gorgeous, sunny, blue-skied, 72-degree Southern California day, it was the birthday of my dear friend Lorene Edwards Forkner. And we celebrated our mutual love of gardening by taking in a morning at the famed Lotusland in Montecito, outside Santa Barbara. The day was the first of a whirlwind, three-day extravaganza that involved too much driving (I logged 600 miles on my Subaru odometer), but treated us to rare hours of time to talk with one another. We also met with old and new gardening acquaintances in San Diego, but more on that in my next entry.

Lorene and I go way back – to the late 1970s when we were both undergraduates at Seattle Pacific University; she, a talented fine arts major; me, a fabric-obsessed textiles-and-clothing major. Who would have guessed that we would both end up in horticulture? (but in some strange way, painting and textile design both influenced our lifelong interest in plants and gardens).

We reconnected in the late 1990s at none other than the Northwest Flower & Garden Show, the year when Lorene was one of the gold-medal designers of a garden for the Washington Park Arboretum (she went on to win another gold medal and “best in show” a few years later for a display garden representing Fremont Gardens, the specialty nursery Lorene ran for 13 years). 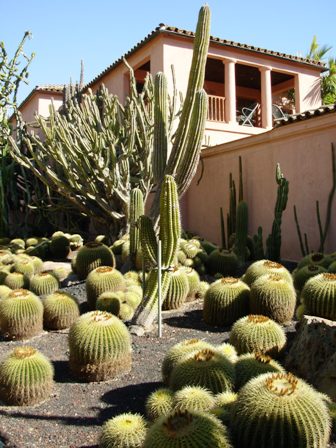 The Mediterranean style architecture of the 1920s is a backdrop to massed planings of mature cactus, including golden barrel cactus.

I so miss my Seattle girlfriends, so having Lorene in town made this a special day. As she had never before been to Lotusland, we simply had to go. It is on the list of Gardening Meccas that one must visit in life. Even if the spectacle of outrageous plantings is not your thing, there is a lot one can learn from the free-spirited garden style expressed by the late Madame Ganna Walska, who spent more than four decades creating this extraterrestial landscape and who died in 1984. 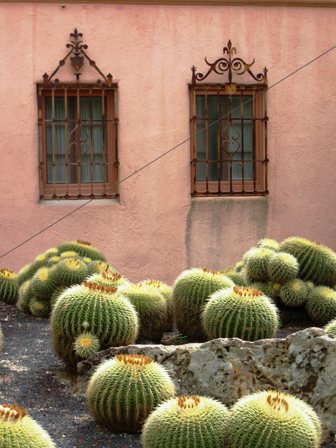 A pleasing juxtaposition of form, color and texture 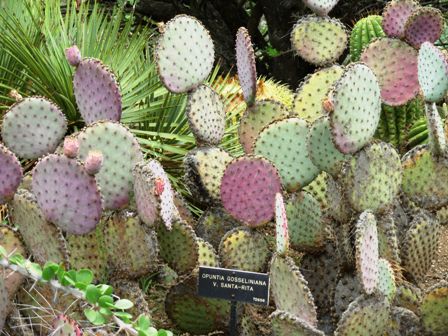 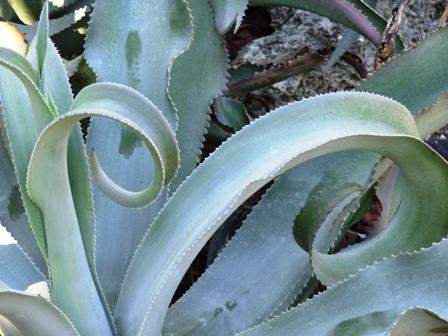 Today, the 37-acre botanical garden is a place to study subtropical and tropical plant collections including rare cycads, cacti, palms and euphorbias. 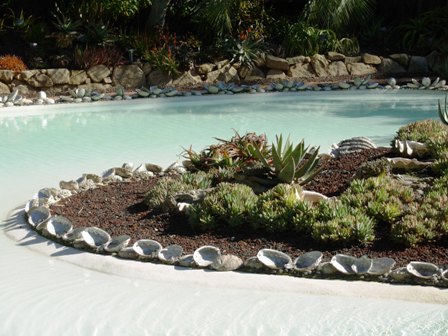 The pool, lined with shells, in the Aloe Garden

A favorite quote from our docent sums up Madame’s approach to gardening: “She always wanted more of everything.”

You need to plan ahead for a visit to Lotusland, including reserving a place in a docent-led group tour that takes about 90 minutes. The fee is $35 per person and there are AM and PM tours. Being with a docent is a little bit frustrating, although Lorene and I were lucky to be with a pretty patient guide (I had the unfortunate experience last year getting stuck with the Docent Nazi who rushed me when I wanted to take photos and stood there pontificating about Madame Walska when I was ready to move on). But by and large, the docents at Lotusland are really smart and passionate about this rare botanical treasure.

The secret to seeing Lotusland at your own pace, though, is to join as a member. For a $75 annual membership, you can schedule a self-guided visit up to six times a year, plus participate in members only events.

This entry was posted on Sunday, October 21st, 2007 at 9:02 pm and is filed under Creativity, Gardening, Shed Glossary. You can follow any responses to this entry through the RSS 2.0 feed. You can leave a response, or trackback from your own site.