Delightful memories of an incomparable garden 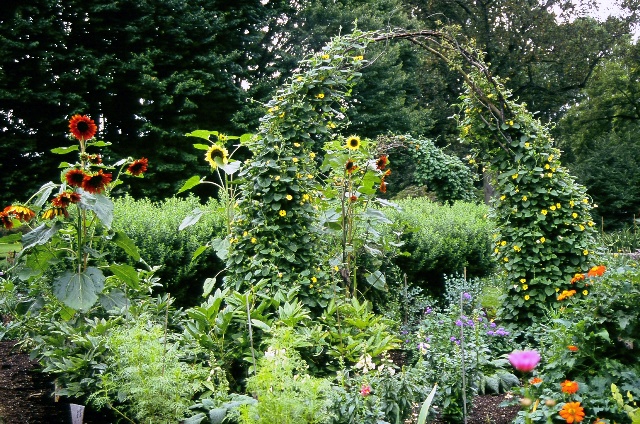 What a treat to join a small dinner group that gathered together before the Southern California Horticultural Society meeting on Thursday to spend time with the charming and talented Bill Thomas, executive director of Chanticleer, a pleasure garden, located in Wayne, Pennsylvania, a suburb of Philadelphia.

Bill and I first met in 2002, when he was on the board of Garden Writers Association and I was a newbie helping to organize the group’s national symposium in Seattle. He is a gifted leader and veteran public garden administrator. Much of Bill’s career involved several positions at the venerable Longwood Gardens in Pennsylvania. His articles appear in national gardening magazines and he is a popular speaker.

About a year later, in 2003, I learned that Bill had left Longwood to join Chanticleer, a 35-acre estate garden now open to the public, on the grounds once inhabited by the Rosengartens, a Main Line Philadelphia family whose ownership of the property dates to 1913.

If you’re intrigued by how deftly-placed elements of design add up to an exciting garden, Chanticleer is the perfect subject for study. 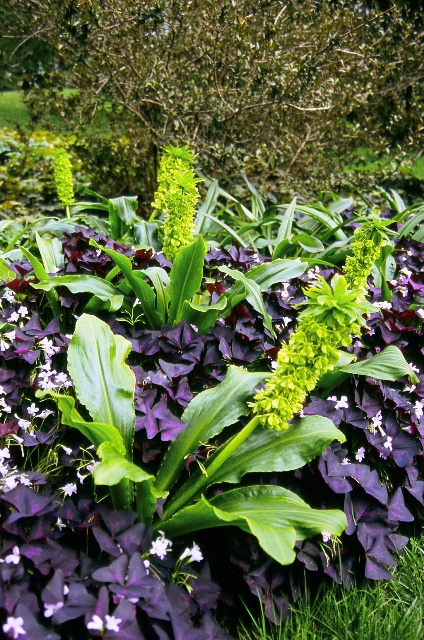 “Our goal is to be one of the most beautiful gardens in the world,” Bill told the SCHS audience at Los Angeles’s Griffith Park on October 11th. “Chanticleer is visually exciting. When you walk through our gates, your hassles are gone and you escape from the real world.”
And what a dream-like escape it is. In late August 2006, on a humid day when you could practically see the thick air molecules (which play a hazy, somewhat Impressionistic trick on the eye), I spent one joyous afternoon and evening at Chanticleer. 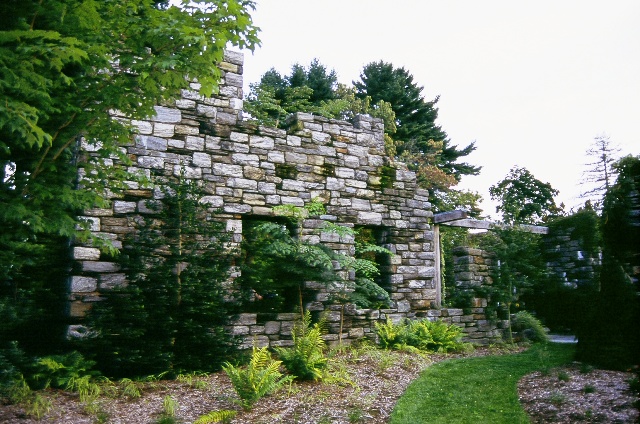 The “ruins” at Chanticleer, constructed with stone from an original estate house

In contrast to a place like Longwood, which last year celebrated its centennial, Chanticleer is a young garden. It opened to the public in 1993, after the death in 1990 of its patron Adolph Rosengarten Jr.

Even today, its beds, borders, display features and strolling gardens are evolving in the hands of a team of seven horticulturists (lucky ones!) who design, plant, tend to and continually evaluate Chanticleer’s appearance. These men and women employ theatrical tricks to overwhelm the visitor, such as planting 150,000 daffodils in two ribbons that flow through an orchard of flowering crab apples, and filling containers and enormous hanging baskets with stunning combinations (the garden is open April to October, welcoming approximately 33,000 visitors each season). 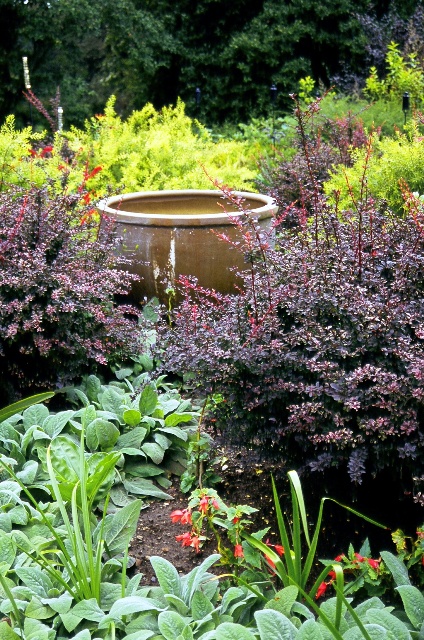 An explosion of color and texture comes in large part from the foliage combinations of hardy and non-hardy exotic plants and Pennsylvania natives mixed together. “We are plant geeks and plant sluts,” Bill confides, with a knowing laugh. This is no joke: There are 5,814 plant accessions, representing 3,784 taxa growing at Chanticleer. 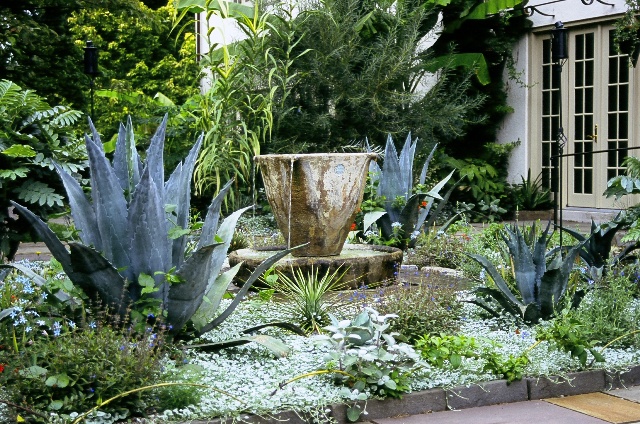 The entry garden, also called the “tropical teacup garden” for a circa 1920s cup-and-saucer-shaped cast concrete Italian fountain at its center, is Chanticleer’s seasonal showcase for agaves, cannas, bananas, dichondra and other tender exotics often found in our Southern California landscapes. The collection includes many tropical plants that spend the cold months over-wintering in Chanticleer’s restrooms. 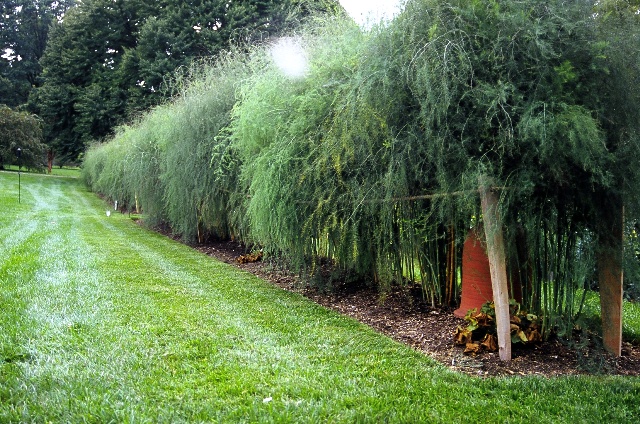 Asparagus, reinterpreted as an edible hedge

The area once devoted to the estate’s vegetable garden has been expanded as its cutting garden, vegetables and herbs included. A 210-foot-long asparagus “hedge” (!) is its stunning element, both ornamental and edible.

The horticulturists here are also artisans and craftspeople who spend the winter months at Chanticleer fashioning hand-wrought chairs, gates, railings, bridges and other decorative objects in the wood-shop and metal shop. Their handiwork appears along the pathways and over each knoll. 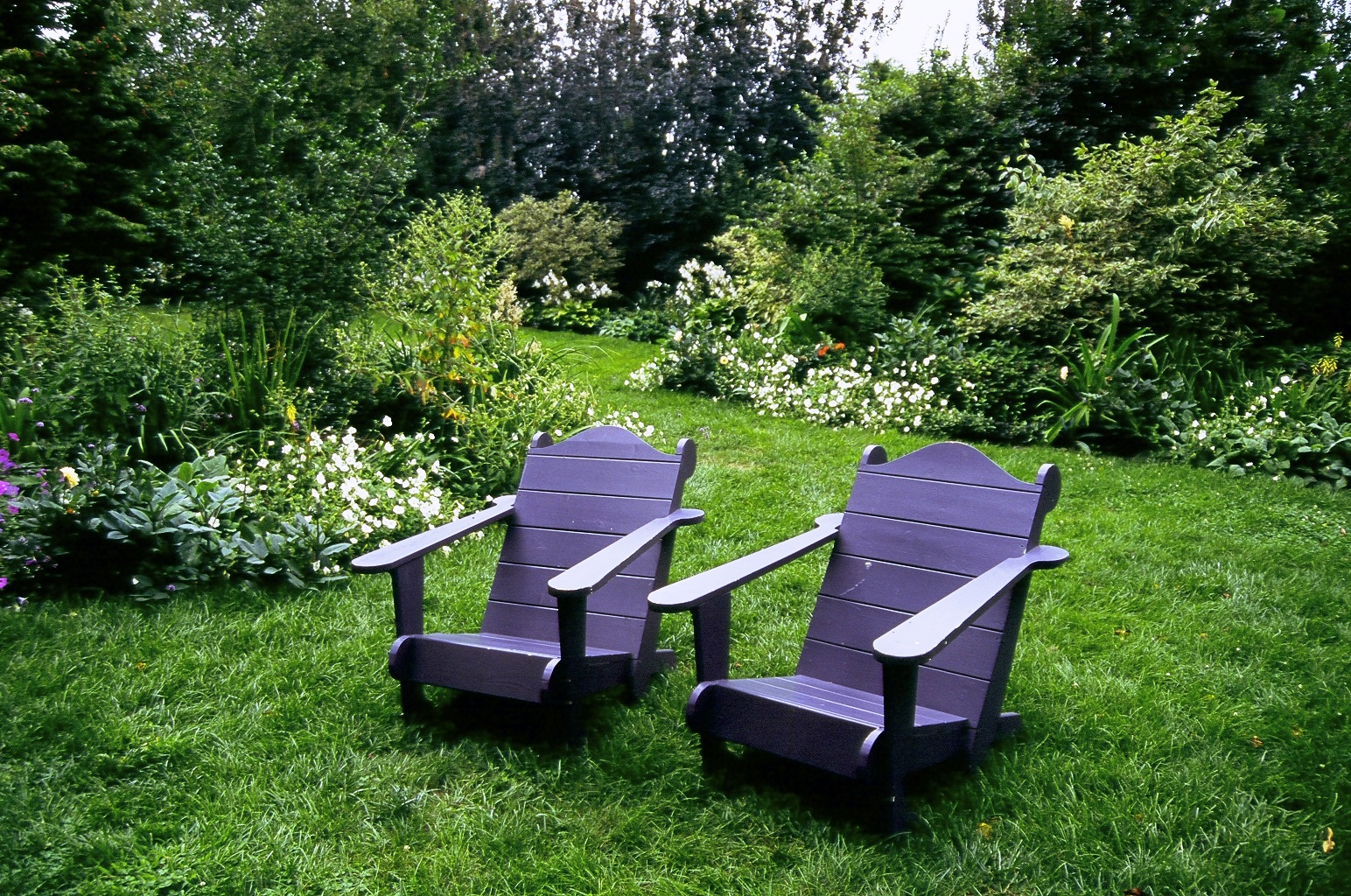 A welcoming respite in dark purple

Two Adirondack chairs, painted to match the exact powder-blue shade of nearby hydrangea blooms, are posed together in conversation; elsewhere, a pair of deep purple wood seats, the back slats cut into wavy patterns, consort quietly while awaiting human occupants. Bill says he much prefers chairs to benches: “Chairs can be moved around; they talk to one another. Or, they are grouped together as if at a party.”

Just to make those of us in the audience feel a little better about the fact that our gardens do not look like Chanticleer, Bill insisted he and his colleagues have “California envy.” He is so kind. Because anyone who is fortunate enough to escape down the rabbit’s hole to this wonderland, even for a few hours, will forever see gardens with newly informed and inspired eyes.

In a Q&A about Chanticleer, Bill Thomas puts this garden’s purpose into a few simple but powerful words: “If every garden is a pleasure garden, what a wonderful world this is.”

This entry was posted on Saturday, October 13th, 2007 at 11:19 am and is filed under Architecture, Creativity, Gardening, Shed Glossary. You can follow any responses to this entry through the RSS 2.0 feed. You can leave a response, or trackback from your own site.

5 Responses to “Delightful memories of an incomparable garden”