Here’s a story that ran in the Los Angeles Times last month. It’s about a few of Stephanie Bartron’s projects to remake her clients’ ugly concrete patios into more attractive – and sustainable – backyard features. The best part of the story is learning how easy it is to turn this technique into a DIY project of your own. The LA Times also features an awesome in this photo gallery. Read on . . . 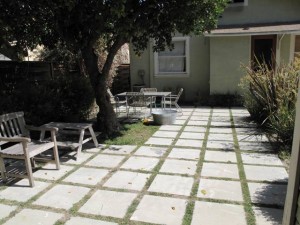 If landscape designer Stephanie Bartron has her way, California’s sea of patio concrete is going to start shrinking.

When the Los Angeles landscape designer eyed her clients’ slab behind a 1940s Atwater Village bungalow, she knew the concrete had to go. New hardscape and plants would have done the trick, sure, but digging out all that paving was costly and, the the waste would just end up in the landfill.

So, Bartron took a different approach. She hired a professional industrial saw operator to slice up the 20-by-20 foot patio into a grid of 18-inch squares.

The result is a new focal point for the garden, resembling evenly-spaced pavers divided by 4-inch bands of grass. When it rains, the storm water percolates into the ground rather than streaming down the driveway and into the street. Little material was thrown away. But the biggest effect was aesthetic. The repurposed patio no longer resembles a basketball court, nor does it dominate the tiny lot. 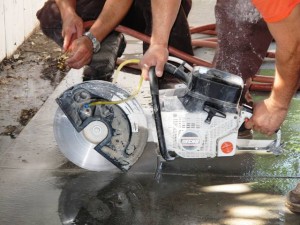 “By cutting it up, I changed the scale of the concrete from a big slab into an attractive backyard feature,” the designer says.

While his two children play nearby, owner Caleb Dewart, a television producer, likes to lounge beneath the mature orange tree that Bartron saved.

“We’re really happy we didn’t have to tear this up and start over,” he says of the patio. “And we like using what we have rather than being wasteful.”

Bartron’s approach solves myriad design challenges, and the designer has artfully sliced up several ugly patios and driveways for clients. Environmentally conscious homeowners like reducing the waste associated with redesigning a landscape. Budget-conscious clients like getting a lot of bang for their buck. 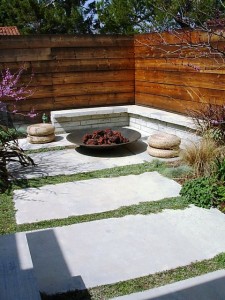 According to Kenny Grimm, sales manager for Oxnard-based Independent Concrete Cutting Inc., this kind of project requires an experienced operator to cut concrete with a diamond blade, 37-horsepower saw. Cost: $140 per hour, plus travel charges.

“We’re seeing more people re-use their existing material because recycling your paving is an affordable alternative to hauling it away,” he says. “You can get a lot of cutting done for around $1,000.”

The couple inherited a gray slab when they purchased a Mt. Washington house designed by architect Barbara Bestor. The concrete had been installed by a previous owner as part of a carport, Bivins says. “It was very bleak and unattractive,” she says. “A real eyesore.”

At Bestor’s suggestion, she and Schmidt contacted Bartron for design help. 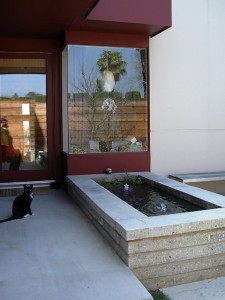 “We asked for shade trees, an outdoor gas fireplace and some type of fountain,” Schmidt says. “Stephanie turned the unused space into our outdoor living room, which in just a few years has been filled by a canopy of shade trees. It’s a favorite place to sit with our newborn son, Hugo, listen to the fountain and watch the trees move in the wind. It calms him down every night before bedtime.”

Used to working with old, cracked paving, Bartron was fascinated with the newer concrete. Four-inches thick and embedded with rebar, it covered 400 square feet between the street and her clients’ front door.

Coming up with a savvy design that created little waste was “like solving a big jigsaw puzzle,” the designer says. “This material was in great shape, but we wanted to turn one giant slab into many smaller elements for a bold and inviting garden space.”

Bartron chose a rectilinear motif to echo the architecture’s lines, slicing the patio into 1-1/2-by-4-foot sections. She layered the cut-out concrete in the form of an L-shaped seating area, the bench backed by a new, horizontal-plank fence. Narrower slices of concrete stacked four levels high form the edges of a contemporary fountain and koi pond. Cross sections reveal aggregate-like detailing when sanded smooth. 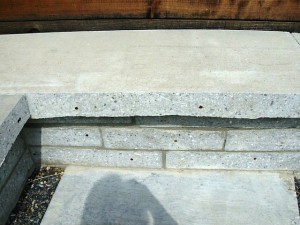 Bartron left some of the concrete in place but carved away planting strips to accommodate low-growing, drought-tolerant dymondia, a silver groundcover. She also removed enough patio to create two large beds for Eastern redbud trees (Cercis canadensis), carex and fescue grasses, and New Zealand flax. Evenly-spaced concrete bands serve as a walkway from the front door and adjacent bubbling fountain to the L-shaped seating, which has a gas-piped steel fire bowl designed by New York artist Elena Colombo .

“It’s a very sexy entertaining space,” Bivins says. “Whenever we have people over, we end up around the fire bowl. There can be 10 of us here and it still feels intimate.”

She praises Bartron for coming up with a money-saving design that also enhances the architecture.

“It was very crafty of her,” she says. “She took our lemon and made lemonade.”

Cutting up the patio

Another view of the lush transformation of this garden

Want to slice up your patio? Landscape designer Stephanie Bartron says it’s not for the faint of heart. It’s possible to make small cuts using a power hand saw with a diamond blade, but you should take safety precautions such as wearing safety goggles and heavy gloves. Large-scale projects, such as the ones shown here, are best left to professional contractors.

Draw a map of your patio and think about where you want to place furniture. Table and chair legs need to be placed on an even surface, not in the spaces between concrete.

Dig along your patio to determine the concrete’s depth and the edge type (uniform or jagged). Newer concrete may be even, but old patios tend to be rough-edged. The type of edge may determine if or how the cut pieces may be repurposed.

While marking your pattern with chalk, note of any cracks, chips or score lines. If possible, tweak your design to eliminate these blemishes.

If the concrete is prone to cracking, Bartron suggests cutting it so the remaining pads are standard paver sizes (18- or 20-inch squares). “That way you can pull out a cracked section and install a replacement paver,” she says.