Better Homes & Gardens and me 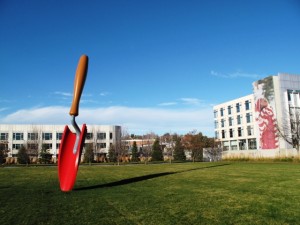 On Nov. 30th, I took one of the only direct flights from LAX to Des Moines, Iowa (on Allegiant Air), arriving in the Midwest around 8 p.m.

Susan picked me up at the airport and whisked me off to her cozy home where we sipped wine and reminisced about being in Tuscany together only four weeks earlier.

We indulged in sentimental memories, of course. The week in Italy – in a village called Montisi – was life-affirming, especially because it was to celebrate my big Five-Oh. 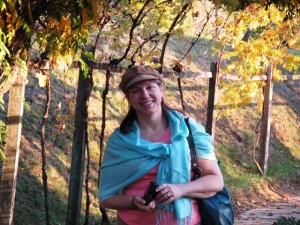 Susan on a sunny Tuscan afternoon at La Foce

The 10 women who joined me, including Susan, are some of my dearest friends. I would do anything to recapture that week we had together. We’d all love to return as quickly as possible!

The Italy week was an amazing “new beginning” for Susan as she dreamed about her next venture, a culinary destination she plans to open in rural Iowa. Stay tuned for news on “Applehurst Farm,” the project Susan is developing as I write this. 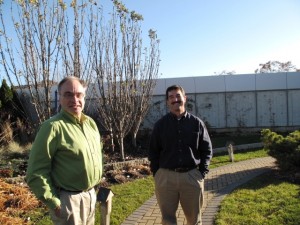 On Tuesday morning, Susan dropped me off at the world headquarters for Meredith Corporation, publisher of Better Homes & Gardens and a million other home, garden, food and lifestyle titles.

I was to spend the day as guest of Doug Jimerson, group editor of all Meredith’s “outdoor” content (books, mags, online) and Eric Liskey, deputy garden editor of Better Homes & Gardens magazine.

It was hard to be businesslike when I kept running into the friends I’ve made and worked with over the years: 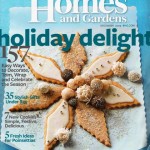 BH&G web garden editor;  and David Speer, editorial manager. Hugs and high-fives ensued. These are people I would rather be friends with than spend my time hustling for assignments.

Doug and Eric and I brainstormed about possible ways I can get more involved in BH&G’s editorial pages. Then we met up with Gayle Goodson Butler, editor-in-chief of the mothership!

Wow – what a great experience. Gayle, Doug, Eric and I had a delicious lunch during which we tossed around story ideas and discussed outdoor living trends. It looks like I will join the BH&G family as a contributing editor for gardening and outdoor content in 2010. I couldn’t be more excited!!! 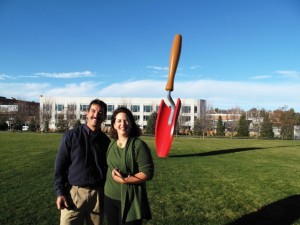 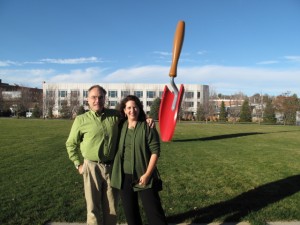 After lunch, we took a tour of the Meredith “campus,” which includes an incredible, larger-than-life sculpture of a trowel called “PLANTOIS.” The pop-art style of this sculpture reminded me of the 19-foot eraser at the Olympic Sculpture Park in Seattle, called “Typewriter Eraser, Scale X.”  Turns out, BH&G’s trowel was also designed by Claes Oldenborg .

Doug and Eric also showed me Better Homes & Gardens’  Test Garden, a beautiful walled oasis in the heart of the corporate campus. Here’s a plan of the garden (right) and a company description of how it is used: 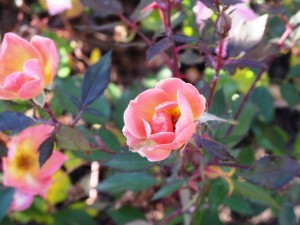 Yes, a rose was still in bloom on Dec. 1st

Mind you, this was on Dec. 1st in Des Moines, USDA Zone 5 or something like that. But several roses were still in bloom and the garden looked almost ready for its dormant winter phase, with lots of fresh mulch spread around, grasses and perennials cut back and everything tidy.

I was particularly drawn to the green shed, of course. I found out from David Speer that the plans for this potting shed are a free benefit of joining BH&G’s new Garden Club. 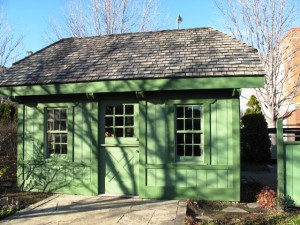 I do love this green potting shed with gabled roofline

For $9.95, you get the shed plans and other cool resources. Check out how to sign up here.

If you find yourself in Des Moines, you can schedule a tour with garden manager Sandra Gerdes on Fridays from noon to 2 p.m., May through October. The garden is located at 1716 Locust Street, Des Moines, IA 50312. The phone number is 515-284-3994.

Here are more pics of the beautiful Test Garden: 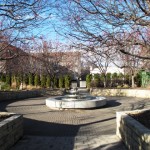 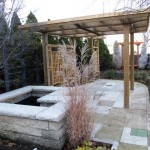 Patio, arbor and water feature, created by the editors of Meredith’s WOOD magazine 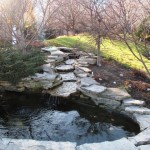 By the way, the original test garden is on Doug Jimerson’s farm outside Des Moines. I got to visit that evening and join him and Karen Weir Jimerson, his writer-wife, for a delicious dinner.

Okay, doesn’t it make you feel better to know that the guy who heads up all of Meredith’s garden/outdoor living content is basically a gentleman farmer? In addition to their lovely farm and century-old farmhouse, Doug and Karen tend to six dogs, at least six cats (I lost count), a flock of sheep, a huge family of chickens and roosters, donkeys and horses. Before dinner, Doug gave me a tour of the Jimerson Farm in the waning daylight. I thought about how much I could love living on a farm in Iowa. Never mind. I’m just going to visit Susan and Jerry when Applehurst Farm gets up and running.

As for BH&G, my first contributions won’t appear until May 2010, but you can be assured that lots of creative storytelling will occur between now and then.

I’m excited – and grateful – for this cool opportunity!

A Post Script. I flew home from Des Moines on Dec. 2nd. While I was there, the weather was beautiful, with brilliant blue skies, sunshine and balmy (for Iowa) low 50-degree temperatures. One week later. . . yes, only one week later, my friends were buried in 16 inches of snowfall that practically shut down Des Moines. I heard that something like only 17 out of 60 flights were allowed to depart from the Des Moines Airport.

Whew. I totally lucked out. Thank you to the weather gods!

This entry was posted on Thursday, December 17th, 2009 at 9:59 pm and is filed under Creativity, General, Writing. You can follow any responses to this entry through the RSS 2.0 feed. You can leave a response, or trackback from your own site.

6 Responses to “Better Homes & Gardens and me”