Welcome to my 101st post on Shed Style. I guess it’s a bit of a milestone, and I have been wanting to do something special to mark the accomplishment. For bloggers who post constantly, finally passing the one hundredth installment may not be that significant (some of my pals could do that in a month or two!). But for me, a relative newbie to blogging, reaching Number 101 is an exciting benchmark.

By moving into the triple digits as I document my little corner of the blogosphere, I realize how much I enjoy this writing venue. There’s a lot of freedom when a writer can sit down and compose her thoughts unhindered by another’s deadlines, tone, or style. No editor, no word-count restrictions. Sure, there’s no pay, and the circulation (readership) is certainly a lot smaller than the traditional print media that usually publishes my words. But even still, the presence of this blog in my life fills a personal and creative need that my other outlets don’t always satisfy.

A BIT OF BACKGROUND 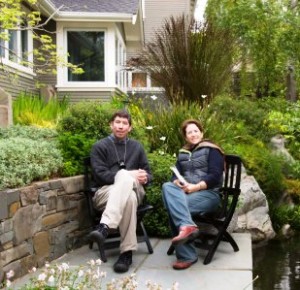 I originally started this blog in March 2007 to document the creation of Stylish Sheds and Elegant Hideaways, the book that photographer Bill Wright and I produced and published this past April. The early morning, “on-location” photo at right is from our year-long odyssey to discover and document the stories of the most creative and inspiring shed designs around the country (not to mention their inspiring owners).

[As an aside, the idea of writing a book-in-progress blog didn’t really take off until AFTER the photography and manuscript finished in the fall of 2007 . . . best-laid plans, and all that!]

Bill and I talked about this book for a long time (we’ve worked together since 2000). But by the summer of 2005, we got serious. Bill had just started to taste the sweet and satisfying flavors of the book world by collaborating with interior design writer Brian Coleman on a book called “Window Dressings” (Gibbs-Smith Publishers). I had worked on four previous books and in June 2005 I traveled to NYC to meet Sarah Jane Freymann, with whom we signed on to represent us as agent.

We began with a fairly decent catalog of shed photography, images Bill and I produced earlier for my articles in Seattle Homes & Lifestyles and Romantic Homes magazines. We created a book outline, gathering up bits and pieces of ideas, including some concepts I played around with in 2002 when Gary Luke at Sasquatch Books and I briefly toyed with ideas for a shed book.

Bill and I sat at the island in the kitchen of our (former) Seattle home, joined by our friend Marcy Stamper. A talented writer, editor, and photographer in her own right, Marcy introduced the two of us when she was art director at Seattle Homes and assigned Bill to photograph my first shed design piece for the magazine in 2001. Now freelancing and living in eastern Washington, Marcy was back in Seattle for a few days. We asked her to meet with us and come up with a design concept that we could use to “sell” our book to a publisher. We called our project “Shed Style.” The resulting 12-page mini-book she designed was called a BLAD (which stands for: book-layout-and-design). 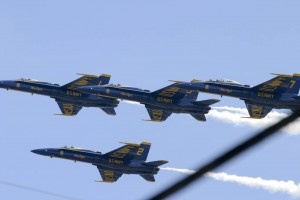 Our meeting took place mid-day in early August. The conversation was punctuated (interrupted) with the screaming, ear-splitting, sounds of the Blue Angels flying overhead. It was a few days before Seattle’s popular Seafair Festival and the Navy jets were in town to perform. Their practice runs and actual performances occur over Lake Washington in Seattle.

Um, yes, right over the rooftops of my former neighborhood in Seward Park. We could barely hear ourselves speak and eventually, we gave up and went out front to witness the spectacle. (Well, Bill and I did. I think Marcy was hiding under the table, reminding herself that it was noise like this that drove her over the Cascades to the solitude of the town of Twisp.) Bill took a great photo of the jets flying by (seen at left).

ON THE ROAD WITH BILL AND DEBRA 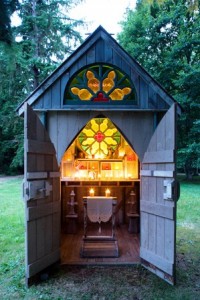 With the book successfully sold to Clarkson Potter/Random House, we began this journey. Although we had a few sheds “in the can” when we started this project a summer later, in July 2006, Bill and I had no idea what kind of momentum we’d soon experience. That same month, even before the contract was actually signed, we photographed five chapters (five shed locations) all around Washington state.

I still remember the euphoria I felt on July 5, 2006 when we came back to Seattle on the last ferry from Vashon Island where we’d photographed Edgar Lee’s magical little chapel-shed, fully lit with votive candles from his former business Votivo (see Bill’s photo, right).

I laid awake half the night replaying the thrill of the setting and the joy I felt looking through the lens of Bill’s camera as it framed the scene we’d created.

The following month, in August 2006, I moved with my children and dog to join my husband in Southern California (he preceded us by a few months). A week or so later, Bill and his wife Pauline welcomed their brand new baby Ella into the world. How many more life-altering things could we manage in such a short period of time?

We got back on the road by November ’06 when Bill flew down to Burbank to spend a few days before Thanksgiving photographing San Diego area locations with me. After the holidays, we started on an intense marathon of travel to scout and photograph sheds, sheds and more sheds.

Stylish Sheds and Elegant Hideaways was published in late April. Since then, Bill and I have pursued our own projects, but we continued to scheme about how/when we could again collaborate.

In the six months since our book’s release, we’ve had some great adventures – together and individually. Bill continues to photograph GREAT projects and I continue to write design pieces for national and regional magazines and Southern California newspapers, including the Los Angeles Times and the San Diego Union-Tribune. Recently, Bill nailed two great covers, which I want to share here: 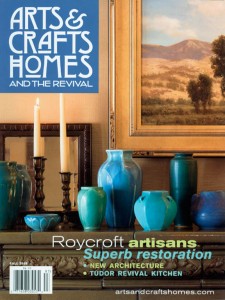 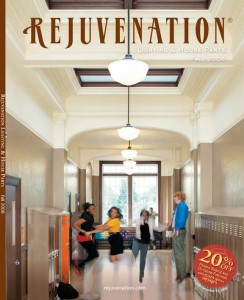 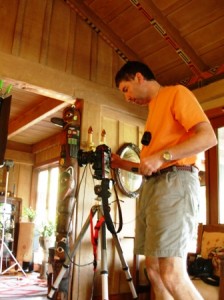 Our work has appeared together in several recent magazines, including stories for the October 08 issue of Alaska Airlines/Horizon Air magazines, the November 08 issue of Seattle Homes & Lifestyles, and others, but since completing the G-R-I-N-D of our “year of the book,” Bill and I had not been able to find the time to create any new stories together.

That opportunity finally came last week, when Bill flew from Seattle to Southern California. We drove up to Ojai, the historically famous town located east of Santa Barbara near the Topatopa Bluff, to photograph a 1908 bungalow, its grounds and interiors, for Arts & Crafts Homes. See Bill at work, right.

We enjoyed two days of hard but gratifying work, thanks to owner Kathy Couterie (an ace stylist in her own right!).

The article about the home she owns with her husband, Emmy-winning director and Oscar-winning documentary filmmaker Bill Couterie, will appear in 2009, but until then, here is a preview of our photo shoot: 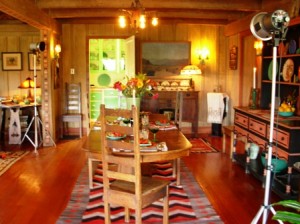 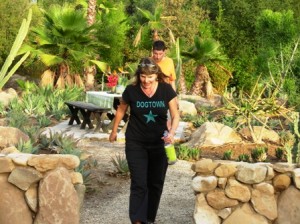 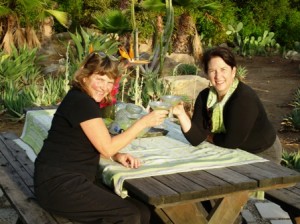 The sun is about to set, we’ve photographed the garden, and we’re ready to call it a day.

This entry was posted on Friday, November 14th, 2008 at 9:56 pm and is filed under Creativity, Writing. You can follow any responses to this entry through the RSS 2.0 feed. You can leave a response, or trackback from your own site.

4 Responses to “Architecture and photography”