When an interior designer transforms her garage. . . 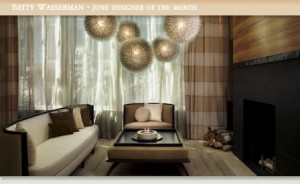 New York-based interior designer Betty Wasserman, whose redesign of a one-car garage and potting shed into a gorgeous guest cottage is featured in Stylish Sheds and Elegant Hideaways, has been named JUNE Designer of the Month by the luxury linen firm Frette. Profiled on Frette’s web site (photo above and at left by Frette), Betty is described as “a rising designer who has made her mark by fusing original art, interior design and home furnishings into a complete and modern approach to lifestyles.” The article continues: “She takes a warm, minimalist approach to design to create an environment reflective of modern themes while concurrently expressing the lifestyle and needs of the client.”

In “Second Act,” our chapter about her inviting backyard destination, Betty plays the role of designer and client. Bill Wright’s photos capture the spirit and flair of Betty’s creative work. In my text, I tried to sum up her acumen as an artist and designer:

Where others saw “potting shed” Betty Wasserman saw “guesthouse. She renovated the barn-shaped structure with her signature “country modern” style, using furniture and art to create a cozy backyard getaway. 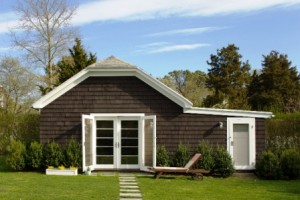 This talented young woman breathed new life into a 1930s Hamptons garage and created a serene guest cottage for weekend visitors. Bill and I still talk about the day we arrived at Betty and her daughter Milly’s  Southampton backyard in May 2007. Situated behind her 1930s farmhouse, which Betty also renovated with a refreshing face-lift, the 600-square-foot garage revealed undeniable charm. A gambrel-style roof hinted at the building’s history. The original barn-style sliding door was mounted along the outside, as one would expect. But there was a promise of something new and exciting on the face of this little brown building.

A pair of horizontally-divided French doors enliven the front of the building.  Square, cottage-style windows give it a welcoming, wide-eyed personality. Tidy evergreen shrubs anchor the foundation into the ground. Square paving stones punctuate the lawn with a checkered pattern. Everything is crisp and confident. And that is just the exterior. 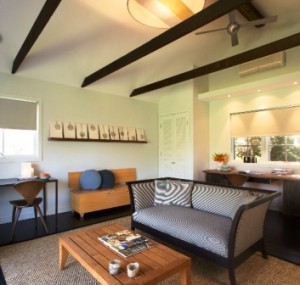 The interior is, as Bill likes to say, “magazine picture-perfect.” When we walked inside, it was so understated and classy that we honestly just stood there and pointed the lens. That’s not to say it was easy to photograph because like anything done well, we had to light the interior and compose our shots. We also had some kind of insanely short deadline, since weekend guests were expected to arrive in less than three hours. The picture-perfect room would soon be filled with their luggage and tennis equipment.

Somehow, thanks to a year of mentally communicating with one another on our locations, Bill and I whipped into high gear, angling furniture, and running into Betty’s house to borrow accessories like pillows, vases and candles. Her daughter Milly, who reminded us of the storybook character, Eloise, alternated between hanging around to watch, posing on the sofa in her party dress, and racing around the garden in “superhero” mode. We could have used a superhero to make time stand still and allow us to work at our leisure.

Miraculously, we shot something like 11 images in that three-hour window. Serious record, folks. Bill likes to say, “we did our best work in the shortest period of time!”

We have to give much of the credit for our awesome photos to Betty herself. After she was through with it, as small as it was, the serene guesthouse gave no hint that it once held a truck or tractor. This woman has incredible vision. To Betty, what once was a 200-square-foot lean-to style potting shed appeared just the right size for an apartment-efficient kitchen and even a postage-stamp-sized bathroom.  The garage ceiling was stripped away to make room for earthy beams overhead. A Murphy bed, hidden behind a custom door that Betty created by “weaving” walnut veneer strips over and under steel rods, was just one of her innovations. Betty designed much of the guesthouse’s custom furniture, similar to pieces in her line called bettyhome.

The garage-turned-guesthouse is popular with visiting families and their small children, usually playmates of Milly. It’s also a private retreat for mother and daughter, Betty says. “Sometimes, Milly will say, ‘Oh, Mommy, can we sleep out here tonight? She loves that whole feeling of it being our separate getaway.”

If you click over to the Frette web site, you will read a Q&A interview with Betty. Her answers to two of the questions struck a chord with me:

Q: What advice would you give to other young, up and coming designers?

Q: What do you look forward to accomplishing in the next 10 years?

A: Besides raising my 5-year-old daughter Milly to be a confident, happy child who is proud of her mom, I also look forward to seeing the business grow to another level in terms of project type and scale. I enjoy having our projects published, and I would like to consider producing a book about my work some day. We appear in a new book just released called “Stylish Sheds and Elegant Hideaways,” by Debra Prinzing. Milly and I are featured in our Southampton guest house and that has inspired me to want a book published about my work soon!

Congratulations, Betty! Thank you for sharing your talent with us and here’s to your future success!

This entry was posted on Thursday, June 5th, 2008 at 8:15 pm and is filed under Architecture, Creativity, General. You can follow any responses to this entry through the RSS 2.0 feed. You can leave a response, or trackback from your own site.

5 Responses to “When an interior designer transforms her garage. . .”