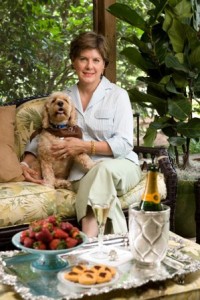 Mary Martin, with Wallace, her cockapoo; photographed on July 5, 2007 by William Wright

Mary called me on May 15th from Atlanta to tell me of her sudden diagnosis of brain cancer. Four days later, she died, after doctors tried to relieve the bleeding and remove her tumor.  How can one so vibrant and full of creative energy disappear from our lives so quickly?

Featured in “Personal Space,” one of the first chapters in Stylish Sheds, Mary Martin was a consummate Southern lady. She embraced this book with incredible passion and support, investing her own time, money, and energy to promote it to clients of her fine gift business, Mary’s Garden Champagne Savers.

I met Mary through Atlanta landscape designer David Ellis, of Landshapes Garden Design. I fondly remember when Wendy Bassett, my Atlanta “shed angel” (aka fairy godmother), drove me to meet Mary and see her little cabin on a chilly day in January 2007. We came down the driveway, turned the corner into her gorgeous backyard (even in winter, it was in perfect, tip-top shape!), and were immediately drawn down the curving stepping-stone path toward a charming split-log style haven. 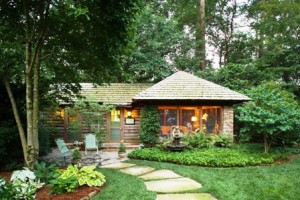 While she wasn’t sure of its provenance, Mary guessed that the rustic, 1930s-era shed might have been purchased by earlier owners from a mail-order catalog, perhaps as a potting shed. She updated the 240-square-foot hut, painted the board-and-batten walls of its two interior rooms in pistachio green, added a fresh coat of  bay-green paint to the two cottage doors and “moved in.”

Beyond the walls of her rather grand Southern Colonial-style home, Mary could be found, secreted away in her backyard studio, which served as a potting shed, storage for beekeeping and honey making, a painter’s easel and a writing room.

“When I first saw it, I thought, What a wonderful place for gardening, but it has also become a nice little project building,” she told us. 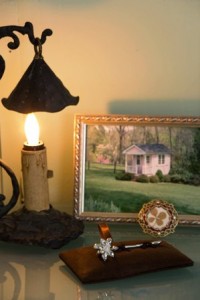 Her love of this little building, which Mary later expanded by adding a 16-by-17 foot screened room, was rooted in memories of a childhood playhouse. She played outside and cooked on a real stove inside a little pink playhouse her father, John Martin, built for Mary and her younger sister, Ann. On her desk inside the cabin, Mary kept a framed photograph of the tiny, sweet structure.

“I do think my childhood memories of that pink playhouse tie into my enjoyment of this very private, peaceful ‘retreat’ where I feel hundreds of miles away from the city when I’m inside it,” she said.

I spoke today with Janell Knox, a friend of Mary’s since college, and she told me that Mary faced the news of her illness with incredible courage. “She was out in the cottage on Sunday,” Janell says. Later that day, the pain in her head was so severe that doctors had her taken to Piedmont Hospital in Atlanta. Efforts to relieve the bleeding failed. In her last moments, Mary was surrounded by friends and loved ones, including her parents, John and Elizabeth Martin. The Atlanta Journal-Constitution’s obituary of Mary aptly described her as having “enthusiasm for life.”

Selfishly, I am so pleased that in her last year, Mary befriended Bill Wright and me. She had an intensity about everything she did in life, including the way she devoted herself to friends. We will miss her spirit, although having a glimpse of her in the pages of our book is a quiet comfort.

I end with a quote that Mary loved. It is from her late grandfather, Rudolf Anderson, who was a landscape designer and widely known for his camellia and azalea breeding throughout the Southeast. It sums up her philosophy, as well, evident in the way Mary drew her beloved plants and garden into her life.

“I’ve always felt that anybody looking at beauty in nature cannot help but have more noble thoughts.” (Rudolf Anderson, 1967)

This entry was posted on Saturday, May 24th, 2008 at 8:59 pm and is filed under Creativity, Spiritual Practices, Writing. You can follow any responses to this entry through the RSS 2.0 feed. You can leave a response, or trackback from your own site.

3 Responses to “Remembering our friend Mary”