You know how they say “everything is bigger in Texas”?

When it comes to throwing a party, I think it’s true!

Last weekend, Stylish Sheds and Elegant Hideaways was feted at two separate gatherings: one in the country; another in the city. Our hosts are some of our favorite Texas shedistas, who invited their friends, family and fellow master gardeners to toast this project. Here is a recap: 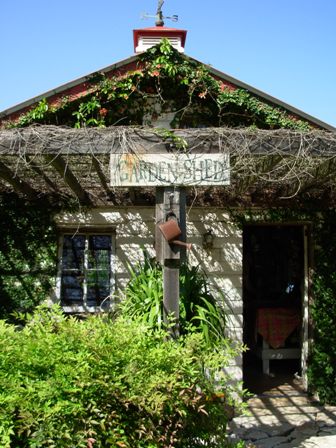 Sylvia and three of her talented friends, Claire, Suzi and Nancy, pulled out all the stops to create a dazzling spring-afternoon-in-the-garden last Friday. We arrived, champagne in hand, to find these four doing the creative cooking of an entire catering crew in Sylvia’s kitchen. These gals were also “on-location” with us last April 2007, when they posed for a tea party portrait in Sylvia’s garden shed. We laughed and giggled our way through a very fun photo shoot. The final party photograph didn’t make it into the pages of Stylish Sheds, so I’ll share it here: 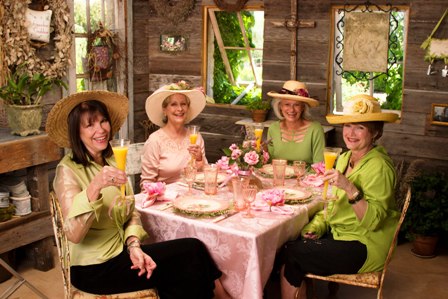 Stonebridge Gardens in Bertram, Texas, the site of last Friday’s book party, was in its glory. The charming limestone rock garden shed that Sylvia and Steven designed (built by Sylvia’s son Brad McCasland and Paul Solis) was at the heart of the celebration.

The menu included delicious garden-inspired food, floriferous cakes and little edible “flowerpots” that fed the eyes as well as satisfied the palate. We greeted 60 or 70 of Sylvia and Steven’s friends and signed copies of Stylish Sheds. Thank you to local, independent bookseller “The Bookshop” in Marble Falls, Texas (and owner Dortha Feaster-Coalterand her daughter Robin) for handling the book sales and sending everyone home with a gift tote-bag! 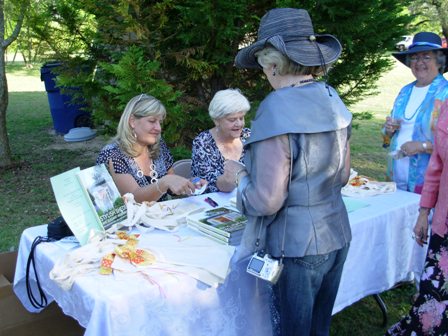 Robin and Dortha of The Bookshop – happy book-sellers 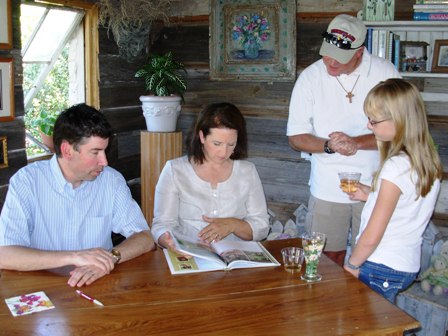 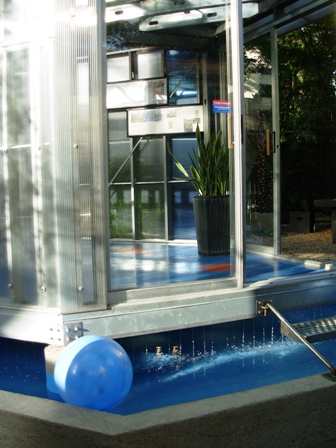 Loretta and Terrill Fischer, owners of a wild-and-crazy modern greenhouse-inspired shed in the heart of Austin, threw their shed shindig  on Saturday night, drawing nearly 100 guests. It was a perfect foodie occasion, featuring Loretta’s famous cheesecakes. She pulled out all of those secret recipes from her days of owning Loretta’s Fabulous Cheesecakes of Texas, a popular Austin bakery. Jalapeno cheesecake, anyone? Bite-sized chocolate and original mini-cheesecakes with a fresh raspberry on top!

I’m ready to promote her as the next hot cookbook author after sampling a savory Gorgonzola and onion cheesecake, which Loretta served like a spread (you just scoop up a bit with the knife, slather it on a cracker, and you’ll never think of an ordinary cheesecake again!).

Clearly, the food was swell. So was the music, the candle-lights and lanterns, and the centerpiece of the party, the stunning garden house. Designer and builder, Harrison Bates (Loretta’s creative brother), was on hand to shyly accept kudos. Thanks to sister Pam for handling book sales (thank goodness she’s in accounting) and to Terrill, husband extraordinaire, who bar-tended and kept everyone happy. Loretta – you are amazing! We loved every moment and even though I didn’t go to bed until midnight (and then had to get up at 4 a.m. to race to the airport), it was so worth the jet lag and sleep deprivation to celebrate with you!

P.S., It was great fun to meet Cindy Widner, managing editor of The Austin Chronicle, who attended the party and posted a blog about Loretta’s awesome “shed.” She took a little video of Loretta and bro’ Harrison as they “discussed” who gets design credit for the fabulous Mod Pod. Typical sibling rivalry, to be sure. Fun to see them rib each other. Cindy wrote:

Another excuse to navigate the McMansion debris and bewildering streets of West Austin (the better to appreciate the Fischers’ classic gem) came last weekend in the form of a book release party for Debra Prinzing‘s Stylish Sheds and Elegant Hideways, an addictive tome that features William Wright‘s pretty much perfect photographs of fetching outbuildings, including Fischer’s greenhouse and two other sheds from Central Texas (though hailing from Cali, the nutty Norwegian-wood pavilion with grass roof might be my second favorite). 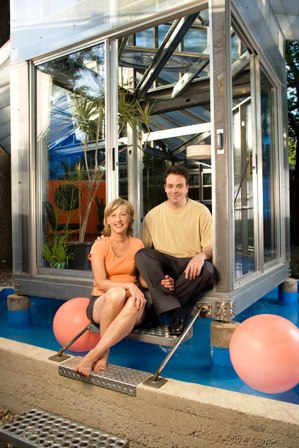 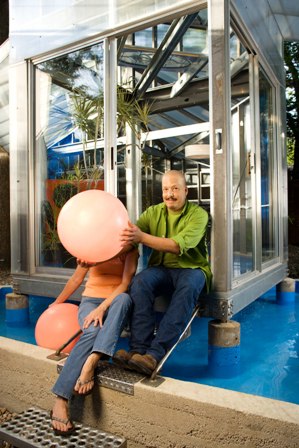 Out-takes from the April 2007 photo shoot. Top: Loretta and Terrill Fischer; Bottom: Harrison Bates (shed designer and builder), hams it up with one of Loretta’s orange balls [William Wright photo] 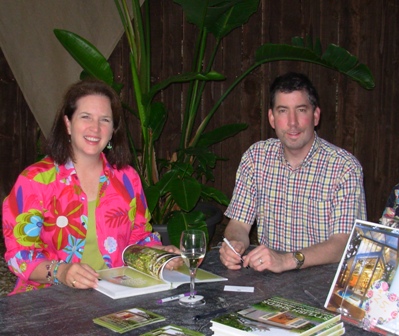 Showin’ off Stylish Sheds in Austin

P.P.S., “Style Matters,” a blog by Austin American-Statesman columnist Melanie Spencer, highlighted Stylish Sheds in the May 15th issue.  The headline reads: “Sheds can be a Stylish Retreat.” Melanie writes:

When it comes to sheds and outbuildings, most of us think of them as utilitarian storage facilities, but some envision a creative, calming or fun backyard retreat. The latter is the case in “Stylish Sheds and Elegant Hideaways: Big Ideas for Small Backyard Destinations,” by Debra Prinzing ($30, Clarkson Potter Publishers). The book features lavish color photographs by William Wright of sometimes chic, sometimes rustic guest houses from across the country, including writing retreats, gardening cottages and everything between. Of four structures in Texas, two are in Austin, one is in Fredericksburg and another is in Bertram. All will make you yearn for a hideaway of your own.

This entry was posted on Tuesday, May 6th, 2008 at 10:54 am and is filed under Entertainment, Playfulness, Shed Glossary. You can follow any responses to this entry through the RSS 2.0 feed. You can leave a response, or trackback from your own site.