“To be happy at home is the ultimate result of all ambition, the end to which all enterprise and labour tends.”

I’ve been meditating on the notion of home this week, trying to figure out if it’s possible to possess more than one.

And I don’t mean having a second home in the mountains or at a lake (that vacation cabin of our fantasies), but what this question really gets to is whether my heart can be at peace when it lives in two places even though I’m only physically in one of them.

It’s funny how frequently the word “home” appears in our lives. And how many different synonyms we use to describe it (nest, shelter, cocoon, cave, abode, roost, maison, house, castle, my place…..).

Last night, my son’s high school choir staged an ambitious “Singing Waiter Dinner,” during which some very talented teenagers sang — and served dinner to — parents and friends, while also raising funds to pay for their spring performance trip to Boston. The theme of “home” appeared in at least a half-dozen of the numbers: ballads, show tunes, hot songs that teenagers are listening to right now, and even an original song written and performed by one of my son’s fellow choir members. Home is on our minds, whatever our age.

So while in Seattle for the Northwest Flower & Garden Show last week, the notion of home occupied my thoughts. My heart is invested in that city, the city of my college years, our early (pre-children) married life, my many professional iterations, my multiple newspaper, magazine and book projects, the home Bruce and I made for ourselves, with our fabulous architect and builder friends, and the garden I planted and cared for, and loved. This, I thought, was “home.” The place I left 18 months ago for S. California, which was decidedly “not home.”

I remember my first return trip in February 2007, when I flew to Seattle for the flower show and spent five days pretty much on the verge of tears. I stood up on the podium to lecture and was so overwhelmed at the sight of friends and their dear faces in the audience – people who I considered my community – that my eyes welled up and I had to pull myself together in order to give that talk. It was a tough trip because I’d only been away for six months and I felt as if I had been exiled to an alien land.

This time, the story was different. I guess that extra 12 months of familiarizing myself with a new landscape – literally and figuratively – started changing my idea of “home.” During a completely self-indulgent week in Seattle when I left my family behind in order to have long, uninterrupted adult conversation, hug and laugh with friends, inhale the fragrances of wet earth and feast my eyes on plants I can no longer grow, I finally realized that I was kind of just a visitor. Life continues, but it changes. And you know, that’s okay. And for the most part, even though we miss one another, my friends would rather know that we’re happy, adjusting, getting connected and making a good life here in LA. They don’t really want to hear that we’re miserable, lonely, and lost in this land.

And the good news is that we’re not lost. I’m surprised every day about the experience of living here. I never could have imagined feeling “at home” in a new city and state. But it’s happening, thanks to kindred spirits who have adopted me and taken me on plant-and-garden lovers’ field trips, and shared their passion for this place with me. Sandy, a talented designer who I met through a mutual Seattle friend, laughed at me recently, saying: “You’re like a tourist – you get excited about everything new!” I guess I can thank my insatiable curiosity for helping deepen my affection for my new surroundings.

After returning on an early morning Seattle-to-Burbank flight last Saturday, I wrote this email note to a friend: “Being in Seattle last week was the first time I realized that it is no longer my home, but a beloved place that I cherish in my heart. Home is now in Southern California, and after a week of playing in Seattle, I was ready to get back here.”

Yesterday, after playing catch with my dog at the ocean and filling my pockets with bits and pieces of seashells, smooth glass and pottery that dotted the sand, after touring a favorite display garden where the hot orange South African aloes were in bloom, and enjoying brilliant conversation over lunch with Paula, another writer exiled in L.A. (from Boston), I realized what a gift it is to be given a “new home,” even one that I didn’t realize I wanted. 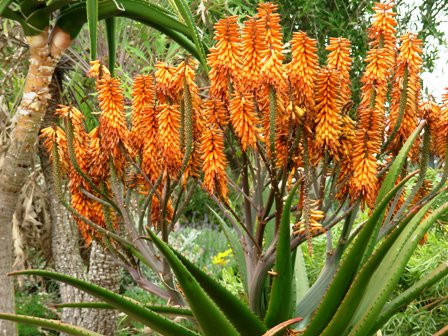 This entry was posted on Saturday, March 1st, 2008 at 8:40 am and is filed under Architecture, Creativity, Shed Glossary, Spiritual Practices. You can follow any responses to this entry through the RSS 2.0 feed. You can leave a response, or trackback from your own site.

6 Responses to “Musings on “home””