As long ago as the Tong Dynasty (616 to 906), Chinese scholars and poets sought refuge in small, distant places – such as a pavilion – to write, observe nature, and seek understanding.  Powerful and universal is the desire to separate from everyday life for quiet, spiritual, and artistic pursuits.  I was reminded of this notion, one that bridges cultures and centuries, when taking a pre-tour of Liu Fan Yuan, or the “Garden of Flowing Fragrance,” at the Huntington Library, Art Collections, and Botanical Gardens, in San Marino, Calif., near Pasadena.

On a crisp, sunny January morning, June Li, Chinese Garden curator, and Lisa Blackburn, Huntington’s communications coordinator, escorted me behind the construction barriers to stroll this magnificent new garden, which opens to the public this weekend.

With an initial phase that includes a 1.5-acre lake, a complex of pavilions, a tea house and tea shop, and five stone bridges, the $18.3 million project has been a decade in the making. It covers about 3.5 acres of a planned 12-acre site.

Amidst architectural majesty of carved stone and wood, handmade roof-tiles, and a dynamic entry wall that undulates like an ancient river, appears the most arresting visual sight: Di Lu Ting, or, the “Pavilion for Washing Away Thoughts.” Other features of this garden are pristine and elegant, but the pavilion is humble by comparison. 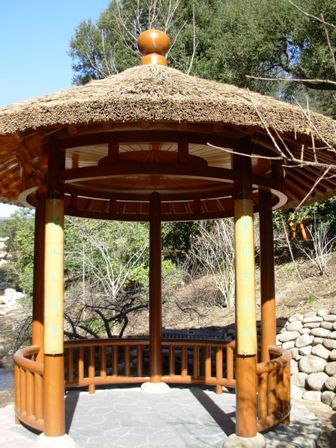 The Pavilion for Washing Away Thoughts

This rustic thatched structure, situated a distance from grand pavilions, soaring moon bridges and pebble-patterned courtyards, appears at the edge of a rushing stream in a canyon-like setting. Constructed with traditional post-and-beam craftsmanship, the round, open-air shelter orients its occupant’s eyes upstream, past mature winter-flowering camellias, toward the heart of the Chinese Garden.

A couplet is inscribed in Chinese characters on two wood columns:

“Flowing water can purify the mind; Fragrant mountains are good for quiet contemplation.”

(by Shi Tingquan, also known as Richard Strassberg, professor of Chinese at UCLA)

June Li told me that the 21th century Chinese landscape designers who worked with the Huntington included the thatched-roof pavilion as a symbolic reference to Chinese literary traditions. Ancient poetry and essays, she says, “talk about scholars wanting to retreat to a thatched cottage or pavilion by a stream.”

It is pleasing to see this peaceful, soul-nurturing place at the wilder edges of the Chinese garden. Just viewing it reminds me that my interest in the architecture and design of sheds and hideaways is nothing new. Centuries ago, on another continent far from here, others sought solitude to pursue art and beauty.

In an article I wrote about the garden for the San Diego Union-Tribune, I ended the piece with this paragraph:

For anyone living in the fast-paced, twenty-first century Western world, time spent in this “living painting” is to be savored. When you visit, perhaps you’ll recall the story Li shares about Tao Yuan Ming, a fourth-century Chinese poet whose favorite flower was the chrysanthemum: “As we all do sometimes, he was frustrated with a life of compromises. So he retired to his garden, which for him was more of a form a protest to uphold his moral principals, rather than just giving up. He desired the ideal of living a simple life.”

This entry was posted on Sunday, February 24th, 2008 at 12:05 pm and is filed under Architecture, Creativity, Shed Glossary, Spiritual Practices, Writing. You can follow any responses to this entry through the RSS 2.0 feed. You can leave a response, or trackback from your own site.

3 Responses to “An ancient shed”