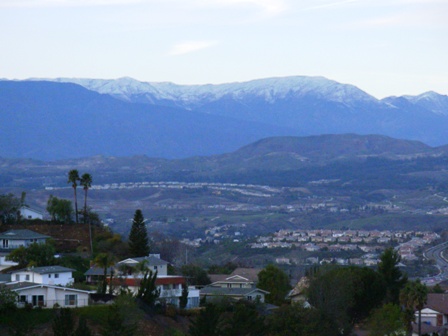 Snowfall frosts the mountaintop, seen from our neighborhood, January 2008

Southern California has received more than seven inches of rain since the start of the New Year. Apparently, this means our area has been blessed with more precipitation in one month of 2008 than we had in all of 2007!

There is something quite delightful about rain when it arrives. Of course, since this happens ALL THE TIME during Seattle winters, we were once desensitized to the cleansing, refreshing spirit of raindrops, sprinkles, showers, softly-falling mists…whatever you want to call it. Now, though, after living here in SoCal nearly 18 months, we do our little “happy dance” when it rains.

Capturing rain is a top priority for cities in the LA area. That’s because the dense network of urban freeways, streets, sidewalks and patios has created an impermeable surface that repels rainfall, washing it down driveways, curbs, and gutters and dumping it into the street drains. On the way, the water picks up pollutants — motor oil, auto fuel, antifreeze — any number of toxins that cling to the concrete and asphalt. So the relatively clean water falling from the sky becomes a chemical cocktail that eventually pours into drainage systems and dumps into the Pacific Ocean.

Several municipalities have established incentives to help homeowners (and their landscape designers) to capture and retain water falling on their property. One creative solution is to sink an infiltration system into the yard. As precipitation gushes along rooftops, into gutters and downspouts, and across the driveway, it is directed to this underground vessel that holds hundreds of gallons of water. Then the H20 slowly filters into the ground, replenishing the water-table instead of spilling into the street. 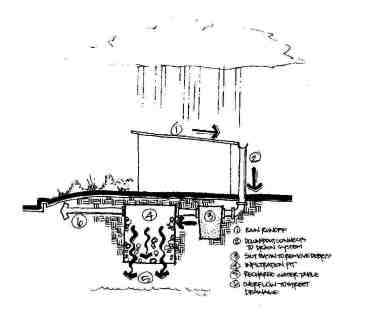 A cross-section of an underground infiltration system, designed by Gaudet Design Group

I took a crash course in Rain Management 101 a few weeks ago when the Los Angeles Times asked me to write a story about creative ways to capture excess rainwater.  I met Peter Jensen of Gaudet Design Group in Santa Monica, a landscape designer who specializes in sustainable solutions. Here is a link to the January 17th article called: “Imagine: Rain, Rain, Stored Away.”

Peter makes something completely functional look very appealing. Here is some of his work: 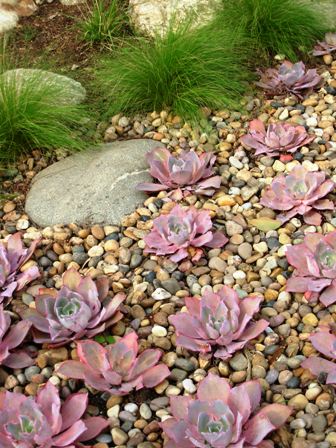 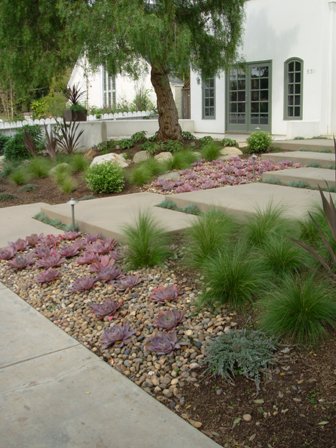 A Santa Monica front yard: In a space once occupied by thirsty turf, an attractive palette of drought-tolerant plants captures rainwater 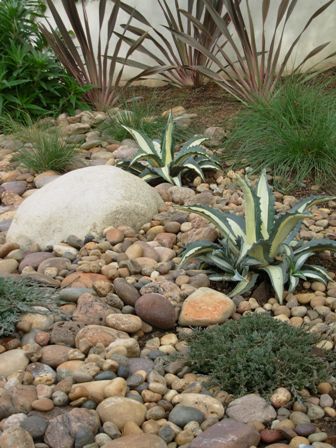 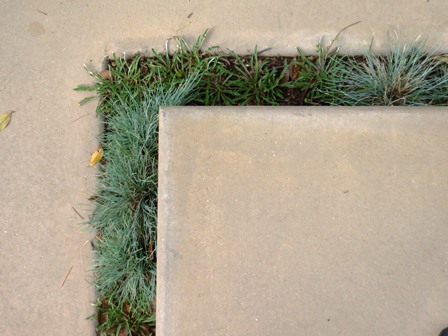 Between “pads” of poured concrete steps, clumps of fescue and dymondia (Dymondia margaretae) encourage rainwater to seep into the ground 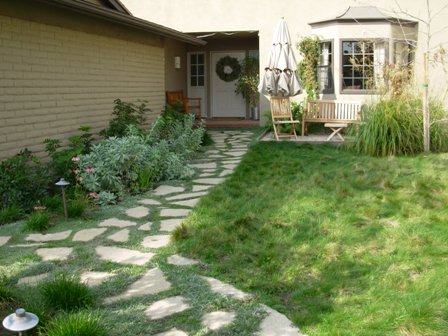 Dymondia margaretae cushions the spaces between pieces of broken concrete 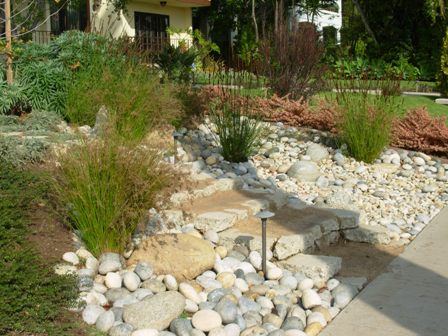 To passers-by, it looks like a dry creek-bed; but this river-rock entry garden is installed above an in-ground infiltration system 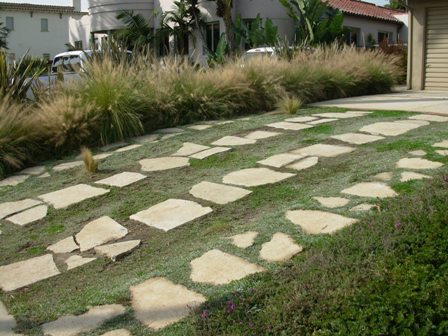 Once a two-car driveway that shed rainwater into city streets, this re-designed drive uses a patchwork of ground-covers and broken concrete to allow rainwater to slowly seep into the ground.

This entry was posted on Monday, January 28th, 2008 at 9:03 pm and is filed under Architecture, Gardening. You can follow any responses to this entry through the RSS 2.0 feed. You can leave a response, or trackback from your own site.

4 Responses to “Rain is good”