Anyone who has taken an art theory course or studied design will be familiar with the “golden mean” or the “golden ratio.” These terms describe a magical, eye-pleasing proportion that appears time after time in nature’s own handiwork. The mathematical formula is 1-to-0.618.

Look at a nautilus shell or the face of a perfectly-formed dahlia and you’ll see evidence of that unmistakable perfection. Artists, architects and designers have tried to attain (emulate?) this natural phenomenon. The logarithmic formula was studied by a 13th Century mathematician, Leonardo da Pisa (Leonardo Fibonacci). He developed what is known as the “Fibonacci Series,” a progression of numbers that explains nature’s structural design, especially seen in botany. Beginning with 1+1=2, and then adding the sum of the first two numbers with the second, you begin to see an endless series of numbers: 1, 1, 2, 3, 5, 8, 13, 21, 34, 55, 89, 144, etc. (Each number is the sum of the two numbers preceding it.) Count the seeds on a pine cone, daisy or sunflower. You will begin to see this beautiful, perfect, equation.

Another related, and also timeless, design notion is called the “French Third.” It is the approximate ratio of 1/3-to-2/3, which also appears in classical paintings, sculpture, architecture and design.

Now I read that scientists think even our brains intuitively respond to evidence of great beauty.

Researchers in Italy recently showed great works of art to volunteers with no artistic training (some of whom had never before been to a museum). According to a report in The Week (12-7-2007), neuroscientists showed their subjects images of Classical and Renaissance sculptures by Michelangelo and da Vinci. Some of the images had been altered, slightly modifying the original proportions. When subjects viewed pictures of the original sculptures, scans of their brains showed a strong emotional response.

There was less response to the sculptures with changed proportions. “We were very surprised that very small modifications to images of the sculptures led to very strong modifications in brain activity,” researcher Giacomo Rizzolatti was quoted as saying. The brain, he surmised, may have a special attraction to images that demonstrate the golden ratio, which shows up in nature, and is emulated in great art. And our brains interpret these proportions, responding to them positively.

It is quite humbling to realize that for all our lofty notions of “beauty,” “art” and “good design,” our very body (brain and soul) recognizes intrinsic beauty. 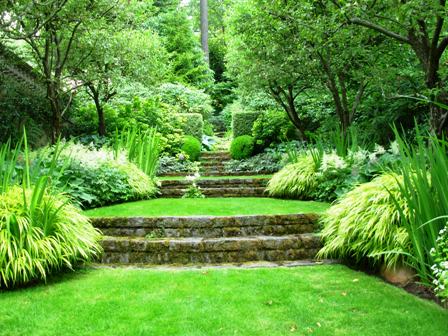 The gracefully-proportioned steps in the Israelit garden (Portland, OR) demonstrate the idea of “French Thirds”

This entry was posted on Tuesday, December 25th, 2007 at 10:16 pm and is filed under Architecture, Creativity, General. You can follow any responses to this entry through the RSS 2.0 feed. You can leave a response, or trackback from your own site.