In an earlier post, I mentioned that TWO “shed guys” from the U.K. have been in touch with Shedstyle.com. If Uncle Wilco of readersheds.co.uk is the “bad boy” of sheds, then Alex Johnson is the shed-dweller’s “boy-next-door.” I’m happy to have them both on my team!

When I first discovered Alex’s site — Shedworking — I was thrilled to learn he was the online voice of a community of people who have shunned the office cubicle for their backyard studios and ateliers. He has successfully identified and tapped into a groundswell of shed users – across Britain and (increasingly) on U.S. soil. I’m glad to join this international conversation and want to introduce my Shedstyle readers to Alex.

Q. Please provide us with a brief bio:

A. I’m a 38-year-old journalist, living in St. Albans, England (just outside London) and have worked on national newspapers and magazines in the U.K. and Spain for the last 15 years, as well as being an editorial consultant for several major charities. I’ve focused particularly on over-50s issues, Spanish culture (I lived in Madrid for several years) and over the last two years, the world of ‘homeworking,’ with an emphasis on shedworking, using a garden office as an alternative to the traditional office workplace.

Q. How/when did you get the idea to start shedworking.co.uk?

A. When I bought my own garden office four years ago, there seemed to be growing interest in the U.K. (and also to some extent the U.S.) in not only working from home, but particularly from a shed-like atmosphere at the bottom of the garden. I felt that this group wasn’t being catered to by the traditional mainstream media — indeed often patronised by it — and so decide to launch “The Shed” as a free PDF magazine to try and bring this dispersed community together. The magazine has recently celebrated its second birthday and now has 1,500 readers in countries around the globe (U.K., U.S., Spain, Italy, France, Brazil, Canada, Australia and New Zealand). I launched the Shedworking blog site just over a year ago and that has also taken off nicely – I blog daily, sometimes posting three or four times.

Q. To what do you attribute the explosion of interest in backyard office-sheds?

A. The increasing belief that the current way we work is simply not applicable any more to 21st century living and that ‘presenteeism’ is largely unnecessary. Offices as factories is a fairly recent phenomenon, largely the result of the industrial revolution, and working from home is superior in many ways – it cuts out the commute, it improves life/work balance, it can be a lot more eco-friendly, it’s more productive . . . the list is endless. And there’s a really impressive range of garden offices available on the market, too, so whatever your wallet size or architectural interest, it’s likely there’s something for the proto-shedworker out there.

A. A large number work in creative industries, particularly the media, with a roughly 50-50 split between men and women. The beauty of shedworking is that while the traditional allotment shed is still something of a male domain, the trend towards shedworking has enfranchised women to own their own sheds and work from them. Many readers are particularly interested in green issues.

Q. Are you working from a backyard shed? Describe it, please. 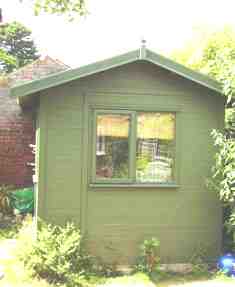 A. I am indeed. It’s a green Homestead Timber Building’s garden office, a Marlow model, rather traditionally shedlike architecturally. It’s perfect since I don’t need a vast amount of space and our back garden is fairly modestly sized. It has full insulation, a heater, electrics, wi-fi and as an office it also handles my overflow for books from the house and minor bits of gardening (I keep my home-brewed cider in here).

Q. Please tell me about your online magazine, “The Shed,” and how people can subscribe to it.

A. It’s a lifestyle magazine for people who work in garden offices, sheds and other shedlike atmospheres. It covers homeworking issues such as what to wear to homework, interesting garden office structures, poetry (we have a poet in residence called Shedman, John Davies, who has just released a new collection of poems, largely about sheds), humor and the latest news about garden offices and accessories. To subscribe, just email me at alex@splashmedia.co.uk.

Q. Can you share details about your forthcoming book?

A. “Shedworking: the alternative workplace revolution,” will be published by The Friday Project in the U.K. in July 2008 during the second “National Shed Week.” It will look, in more depth, at the issues and structures touched on in the magazine and on the site, from historic sheds and shedworkers to examples of how people run businesses from their garden offices in the 21st century to dealing with issues such as isolation and the future of shedworking as microarchitecture starts to really take off. There’ll be plenty of examples to enjoy but it will also be a good read. I’m just finishing writing at the moment.

Q. What do you plan to do next?

A. I’d like to put together a book about shepherd’s huts – these sheds on wheels are becoming increasingly popular in the U.K. as garden offices and backyard structures (both original and reconstructed) but there are also more concrete examples around the world from Romney Marsh in eastern England (where they are called ‘Lookers Huts’) to New Zealand.

Thank you, Alex! It will be great fun to follow your progress and keep up with you!

This entry was posted on Monday, December 10th, 2007 at 10:49 pm and is filed under Architecture, Creativity, General, Shed Glossary, Writing. You can follow any responses to this entry through the RSS 2.0 feed. You can leave a response, or trackback from your own site.