In September, I was a lucky participant in a two-part writing class with Paula Panich. The focus of her class, “Ever Changing/Never Less Than Whole: Writing the Getty Garden,” was perception. She wanted us to consider how, as writers, we truly perceive the world around us.

Paula spent about six months between March and August visiting the Getty Center’s famed Central Garden several days each week. She took photographs and made notes, but didn’t start writing, even after she’d practically memorized each plant in the garden. Similarly, Paula wanted us, her writing students, to “see with intelligence and sharpness; to notice; to be open to surprise and delight – to smell with your eyes, hear with your nose, touch with your ears, taste with your hands.” In other words, she urged each of us to respond on the page with our whole bodies, hearts, minds, spirits.

Most writing courses are very task-oriented. You get an introduction and do some nifty exercises; then you have an assignment, a very tangible assignment (like conduct an interview and write a profile or write a description of a garden and then analyze the adjectives). 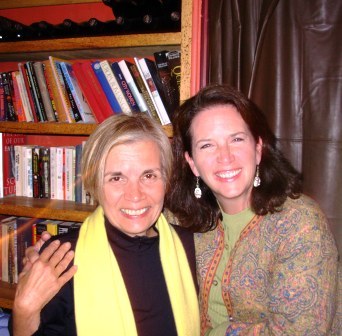 But Paula is a thinking writer’s writer. Enough of that linear, journalistic stuff that’s safe and straightforward. She jolted me out of my comfort zone with a gentle plea (and then a downright challenge) that I change the way I see the world. “If we could only turn off our brains and use our eyes alone,” she said quoting Picasso.

The idea of using our senses to write appeals to me. In writing about well-designed landscapes, I often try to highlight the sensory elements such as fragrance, the music of water, the visual allure of tall grasses dancing in the wind, the strokable lamb’s ears, the tart taste of blueberry on one’s tongue. So following Paula’s coaching, I tried very hard not to THINK but to look, smell, listen, touch, taste and observe. “Things that seep through your feet have a voice and intelligence,” she said, quoting the artist Ann Hamilton.

After a one-hour break during which we wandered the Robert Irwin-designed garden, took notes, absorbed the environment (I sat on the lawn and rested my back against the warm limestone block walls of the museum while studying the copse of sycamores), we regrouped and discussed the practice of writing. Something Paula asked really shocked me to consciousness: “Do you approach your work with reverence, or do you give it the back of your hand?”

Hmm. What a compelling thought. So often I approach my work as a must-do, rather than as a sacred privilege. I’m glad she made me face that question and invited an honest response.

Paula gave her students a writing assignment for the second session, which was scheduled two weeks later. She asked participants to write a piece in response to the garden, a poem, article, critique or essay. To another student and me she said: I’m throwing down the gauntlet to you two. An article comes easy (we were both published features writers) so your challenge is to write a piece of fiction!

Yikes. Fiction? Huh? Not for me, I’m not a “creative” writer, I keep telling myself, repeating what I’ve said since my college newspaper years. That fiction stuff is strictly uncharted and uncomfortable territory. But for Paula, I would do anything. She knew just what kind of challenge I needed to nudge me off of that comfortable perch.

A week later, I found time to return to the Getty Gardens. I got some lunch at the cafe (the perfect procrastination move) and observed an interesting guy eating his lunch. I started writing about him. Not sure where this little paragraph will end up, but here’s what I wrote:

“He was having a bottle of AltaDena milk with his lunch. This seemed a bit in contrast to his graying ponytail, worn denim shirt and wire-rimmed glasses.”

Okay, that wasn’t so bad. But then my soup bowl was empty and it was time to get moving. I had an hour before having to race home to (what else?) meet the school bus.

So I found a comfy spot on the lawn and again leaned back against the warm stone, and just started writing about the garden….and wow- just like those famous novelists say in interviews about the “craft” of fiction-writing – the character Flora presented herself to me. Oh, but first before I introduce her, I have to mention the brilliant writing-coach trick Paula played on me. When she gave me the “fiction challenge,” she mentioned having overheard a Getty docent who was leading around a group of school children. “I heard her tell the children that there is one person who gets to work in the garden AT NIGHT when no one else is here,” Paula said, almost secretively. “And that person has to clap very loudly to scare away the deer that would otherwise come into the garden and eat the plants.”

Paula was so enchanted by this notion that she even tried to track down its veracity. To this day, she doesn’t know if it was true or pure nonsense, but she likes the imagery of a person alone in the garden at night. So she suggested this tale as a possible starting point for my story. Well, I kind of took it and ran with it….but of course, so far, I haven’t figured out how to work in the hand-clapping or the appearance of deer in the garden. But here is what I did write. It’s a start. It wasn’t as painful as I feared; in fact, I have a warm affection for my protagonist. Maybe I’ll finish this tale some day. But as it stands, as a short piece, I like it. 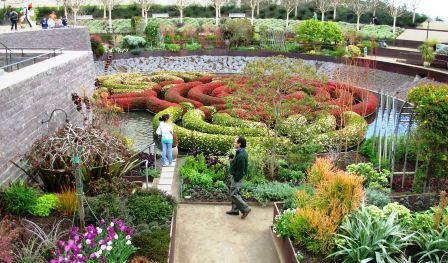 Follow the maze from the center through the garden. That was her idea at least. Flora knew she couldn’t really walk the Robert Irwin azalea labyrinth, but mentally, she would take its journey.

She was alternately mesmerized by its beautiful pattern and frustrated with its abrupt dead-ends. It appeared symmetrical when it really wasn’t. In a garden designed as perfection, Flora knew its beauty was in the imperfection. Otherwise, why was she here?

The petite gardener, who worked with mostly burly guys, stuffed a ponytail under her baseball cap and shoved her Felcos into the back pocket of her jeans. This ritual so familiar and mindlessly repeated had formed a pruner ‘outline’ on the faded denim. Like an etching that you would want to touch.

Working mostly alone, Flora felt she knew many of the garden’s trees, flowers and leaves on a personal level. She conducted silent conversations in her head, talking to each plant, saying: “Oh, you have been busy with the pollinators,” or: “Your orange blooms look exotic against the purple foliage of your companion.” She wondered whether if by listening closely enough she could hear – really hear – a plant’s response. In reality, her plant-conversations were mostly nonverbal exchanges.

Flora believed this artist-designed garden was never finished because of Nature’s nonhuman hand. Perhaps this is why, after 10 years, when the garden’s sycamore trees had grown to thirty feet tall, Flora’s supervisor created the Moonlight Crew.

Once a week she and two others clocked in at closing, prepared to work through the night. Now, Flora’s journey is ceremonial. She arrives for work early, thirty minutes before the last guests leave. As the crowds walk down the limestone steps, she ascends, hugging the hand rail and feeling almost invisible to the museum goers. Yes, it is a job. But it is also an honor to be the Getty’s plant steward, she reminds herself. 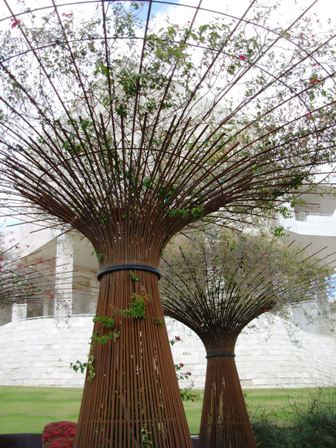 Flora checks into the shed where the landscaping crew’s tools are stored. Hauling loppers and ladder, under moonlight or cloud cover, she comes to the magical garden. The gardeners work on hard-to-tackle jobs, the ones the administration doesn’t want the public to see: “editing” the sycamore leaves to create a dappling effect, or standing on a tall ladder to clip the bougainvillea “umbrellas.” Silent and almost prayerful, they tend, groom and haul away the remnants of too-vigorous California plant growth.

It was during her overnight shift that Flora first really noticed the power of Irwin’s complicated maze. Before, under the intense noonday sun, it had just been a group of curved hedges, tedious to clip. But when viewed at night, the vegetation almost vibrated with energy. There is a rhythm to the repetition of shapes, especially at nighttime when the silhouettes of arcs and crescents appear long before you notice the color or texture.

For Flora, the series of circles-within-circles is a living reminder of the paradox of a gardener. No clear path; organic, repetitive, incomplete. We bring life, but can’t prevent death; we tend, but can’t control; we admire, but it is a fleeting admiration. Beauty ends and then we wait for it to begin again.

This entry was posted on Sunday, November 18th, 2007 at 12:53 am and is filed under Creativity, Shed Glossary. You can follow any responses to this entry through the RSS 2.0 feed. You can leave a response, or trackback from your own site.

6 Responses to “The Moonlight Gardener”