Touring with the Tile Maven 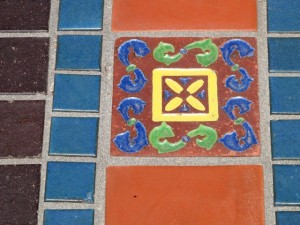 You see them in murals and floors of municipal buildings like schools, libraries and city halls built in the first half of the 20th century. Private homes of the era, designed in the Mediterranean and Spanish Colonial Revival style, boast fireplaces, back-splashes, bathrooms, kitchens and courtyards embellished with gorgeous tiles.

The designs I’m talking about do not come from Spain or Mexico, however. Even though many of the tile motifs borrow from Moorish, Andalusian and Persian traditions, the ceramics themselves were made by Southern California artistans and craftspersons in the 1920s, 30s and 40s.

I’ve seen some of the very best examples from The Malibu Potteries, a factory that thrived from 1926 until 1932 when it succumbed to a fire and subsequently was not rebuilt due to the Depression. In the ensuing years, there are countless stories of brave and assertive individuals who prevented old homes and public buildings from being demolished, just to save these tiles so that others can see and learn about them. And other stories abound of determined preservationists who salvaged and restored old tiles from homes that were razed. 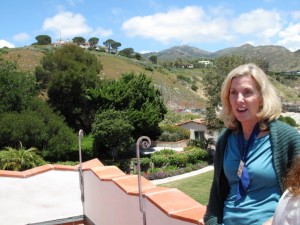 My friend Cristi Walden is one such individual. She is an avid pottery enthusiast, collector and expert of tiles from this era. You might call her a Tile Maven.

Cristi has an uncanny ability to ferret out like-minded folks who live in old houses with intact bathrooms or kitchens, original fireplace surrounds, and tile floors that have never been altered since they were built.

I have been very fortunate to tag along with Cristi on some of her outings with her “Merry Band of Archivists” to tour these rare Los Angeles gems. You will learn more about Cristi and her plans to begin leading tours for the public in the future.

For now, I will share about Wednesday’s adventure. Cristi is a docent and interpreter at the Adamson House in Malibu. She gave a private tour to a small group of friends and wowed us with her knowledge and insights. We were not allowed to photograph anything inside the home, but outdoor photography was permitted, which you see here. 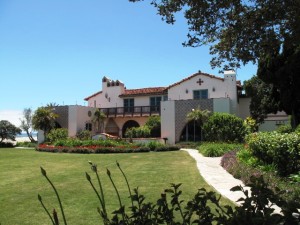 Yes, this was once considered a beach cottage!

Cristi explained that the very best example of Malibu Tile resides here in the Adamson House. Now owned by the State of California, the Adamson estate was built in 1929-30 as a beach cottage for Rhoda Agatha Ringe and her husband Merritt Huntley Adamson. Rhoda was the daughter of May K. Ringe and Frederick Ringe. The Ringes were the last family to own Spanish land grant property.

Today that land is known as Malibu, some of the most exquisite property in all of California – in the country, for that matter. According to Ceramic Art of the Malibu Potteries, a 1988 book written by May and Rhoda’s descendant Ronald L. Ringe, the original Rancho Malibu land – all 13,000 acres of it – was purchased in 1892 for $10.00 per acre. Yup, Malibu prices have climbed exponentially since then!

In 1926, May (Rhoda’s mother) was  a young, wealthy widow who owned thousands of acres of Malibu oceanfront land. She discovered that her property did not have oil (as was the case elsewhere in parts of Los Angeles), but it did have huge clay deposits. May founded Malibu Potteries and hired Rufus B. Keeler, a genius in ceramics engineering, chemistry and production, to run her operation (more about Rufus later). 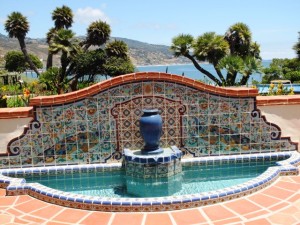 The beach house was May’s gift to Rhoda and Merritt (a rancher and lawyer who supervised the family’s vast land holdings). And its creation gave architect Stiles O. Clements and decorator John B. Holtzclaw a chance to showcase throughout the home all of the unique tile being created by Malibu Potteries.

Exquisitely handcrafted details – dramatic and graceful wrought-iron ornamentation, painted murals and intricate surface decoration, vaulted cilings – with the warm buff-colored walls for a background provided an ideal setting for the rich ceramic architectural accents custom designed by Malibu Potteries. There was lavish use of ceramic tile outside the home in fountains, a star-shaped fish and lily pond, murals, the bath house . . . . Some of the more elaborate installations were framed from inside the house by sensitively placed, elegantly detailed windows. (from Ceramic Art of the Malibu Potteries).

I guess what inspires me about the decorative art of tile is its exuberance. To see even a utilitarian surface embellished with tile – tile that depicts a real rug or a beautiful ocean scene or a colorful bird – can’t help but get you thinking about your own dreary walls, floors, ceilings and furniture. These artists couldn’t help themselves. When they were presented with a blank canvas – the architecture and interiors of a home – they wanted to give it something of beauty. Pure artistry. The good news is that today, there are several tile makers who are reinterpreting some of these classic Malibu designs for those of us just now discovering the tile and its alluring character.

Here are some other awesome photos from Malibu Potteries: 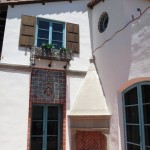 An outdoor fireplace tucked into the corner of the first floor courtyard. 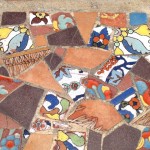 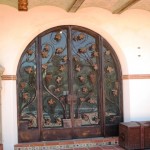 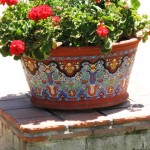 The vivid oranges, blues and yellows haven’t faded since this jardiniere was made in the late 1920s. 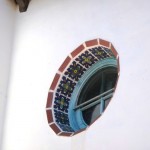 A porthole-style window high in the ceiling of the Adamson family’s sun room. 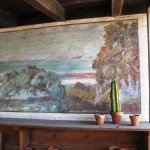 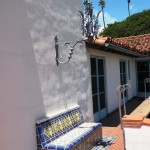 A scene from the Adamson House’s second floor balcolny, with built-in tile bench. 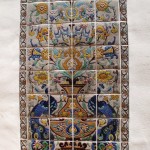 A 32-tile peacock Saracen panel, made with the cuerda seca technique, in a courtyard at the Adamson House

This entry was posted on Saturday, May 29th, 2010 at 10:02 am and is filed under General. You can follow any responses to this entry through the RSS 2.0 feed. You can leave a response, or trackback from your own site.

3 Responses to “Touring with the Tile Maven”