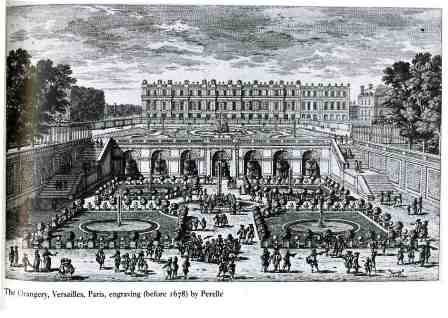 “A building for keeping orange trees warm during the winter months. In the summer months the trees would be placed outside in caisses (square-sided planting boxes).”

Source: The Sun King’s Garden: Louis XIV, Andre Le Notre and the Creation of the Gardens of Versailles, by Ian Thompson.

Europe’s long tradition of keeping citrus trees alive during cold weather began with makeshift structures to shelter rare orange and lemon trees (brought to Europe from China and other warmer countries, such as Spain and parts of the Mediterranean world by plant explorers).

As competitive gardening goes, it’s no surprise to learn that these humble shelters eventually expanded in size, scale and elaborateness, to the point where The Orangery shown above, erected at Versailles in Paris, was almost large enough to hold a small city (image above from The Oxford Companion to Gardens). 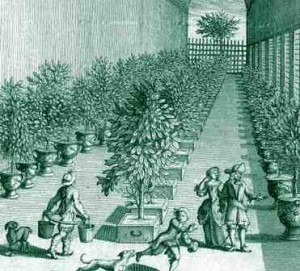 More background, from The Oxford Companion to Gardens (Jellicoe, Goode and Lancaster):

The orange, a native of China, has been a fruit much coveted for English gardens since the 16th century, and the early efforts to conserve it through harsh winters led to the long English tradition of growing plants under glass. British gardeners began to order citrus trees from France and create winter shelters for them in 1562.

During the reign of Charles I (1625-49), the nobility continued to build orangeries, adding bigger and more handsome edifices to their gardens. Some had long south-facing windows, set into classically-styled masonry but with solid, opaque roofing. Celebrated architects of the time devised orangeries in classical, Gothic, rustic, and baronial styles to match the exteriors of the mansions whose gardens they graced.

The idea was to overwinter the trees in the orangeries and then place them outdoors as a novel and luxurious decoration for the garden during the summer (this led to trees being planted in decorated wooden tubs to facilitate moving them outdoors). [Image from: Garden Mania, by deBay and Bolton]

Today, the architecture of magnificent and fanciful Orangeries rarely shows up in private residential gardens. You’ll likely discover them, restored, at public gardens or historic estates. But their architecture certainly influences stylish and elegant garden hideaways. Read further to learn about Joan Enticknap’s lovely dining pavilion in her Seattle garden, inspired by the Orangery at Kensington Palace in England.

A number of garden buildings were constructed during the reign of Queen Anne, some of which still survive. Her principal memorial is the Orangery, built in 1704-5 to the north of the palace. The building was supposed to serve as greenhouse for over-wintering exotic plant and citrus trees that ornamented the gardens in summer. Its accomplished interior decoration reflects the Orangery’s other uses as a ‘summer supper house’ and a place for entertainment. (From the Kensington Palace web site).