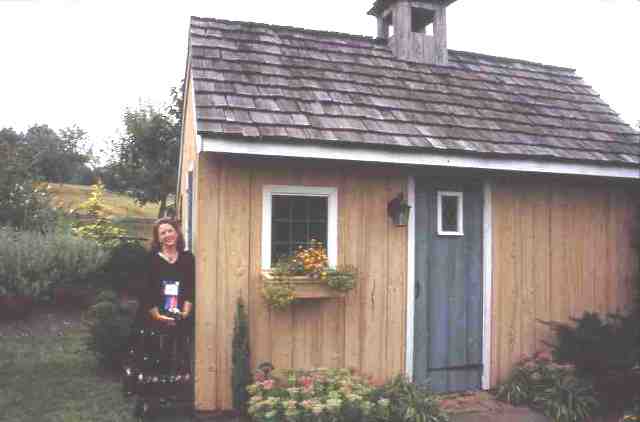 When I began my web site debraprinzing.com in spring 2005, I found its mere existence miraculously helped me be better organized. The timing coincided with the publication and promotion of “The Abundant Garden,” my fourth book.

Having a web site is like having a one-stop-shopping spot for an author. There, I could organize my books, my published articles (magazine/newspaper), my lectures, slide shows, book-signings and anything else that I wanted to document, like garden tours, conferences, nursery spotting, horticultural societies, flower shows, favorite links, etc.

SO, thanks to cultivatedesign.com, and Bob Meador/Willo Bellwood, my fabulous webmasters, we pulled off that “launch.”

Here it is, nearly 2 years later and the web site thing seems so “yesterday.” Ha! Just kidding. I still love my web site. But now that I’ve spent the past year on the sidelines, while watching my garden writer friends start and author highly personal blogs, I’ve decided maybe this blog-thing will serve yet another “organizational” purpose.

ShedStyle.com is a central repository of ideas, notes, drafts, blurbs, journaling, interviews and observations about architecture, interiors, and ornamentation in the garden. The designed and inhabited backyard space, as it were.

At first, I had hoped having this venue would help me organize my “next big thing,” a book called Stylish Sheds and Elegant Hideaways, which Clarkson-Potter/Random House will publish in April 2008. This 224-page volume is the culmination of a passion Bill Wright and I have shared since producing our first magazine article about garden sheds in 2001.

From the middle of 2006 to through the summer of 2007, We spent more than 52 weeks scouting, producing, photographing, interviewing and writing about more than 35 shed locations. Sounds like fun, huh? Luckily, Bill is the best collaborator/partner in the world. And we are both jazzed about the locations we’ll include in Stylish Sheds. 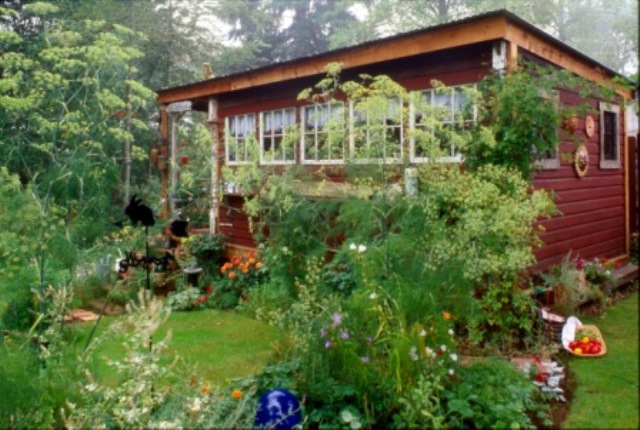 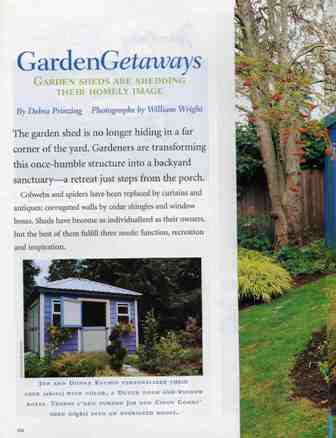 The idea for a book about the architecture, design and interiors of Garden Sheds began in 2001 when Bill Wright and I produced and wrote an article about Sheds (called “Garden Getaways” for Seattle Homes & Lifestyles magazine.

We started with a simple premise: that garden owners were dusting out the cobwebs and sprucing up the interiors of their humble potting sheds for a greater purpose.

We interviewed and photographed the diva of backyard fantasy, Sunni Rudd. You can see her weathered red “shed” above.

Sunni is the kind of person who still dots her “I’s” with a little star or flower (kind of like the ones I used in 7th grade when I was called Debbi). She created a fantasy escape in a South Seattle urban lot. Built from recycled barn wood, the structure featured cottage windows (with lace curtains), a porch with seating for 2, where Sunni and her neighbor share lemonade or cocktails after gardening all weekend, and inside, a daybed with side table and lamp – lots of quiet space to escape, read seed catalogues and nap in the cool shelter away from the sun.
Thank you, Sunni! You got us started. 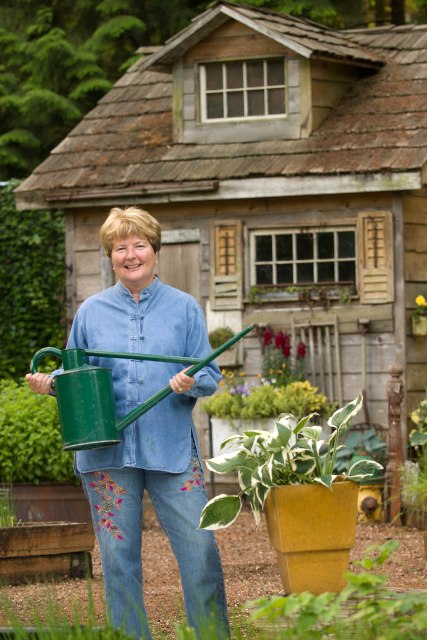 Over the years, Bill and I were drawn to several other great sheds, garden rooms, summer houses, pergolas, dining pavilions, etc.

These highly functional sheds have more going for their exteriors than inside. They are the architectural focal points for Janie and Billy’s country gardens, serving as the backdrop to climbing vines or a scattering of self-sown foxgloves. We turned back “time” when we visited their garden.

And we were inspired with the sense of place they created by dotting their two acres with such charming buildings.

We also fell in love with the “fairy house” designed and built by craftsman John Akers, with interior designer Carleen Cafferty and garden designer Karla Arnold, for their clients in Mill Creek. Inside, a small writing desk overlooking the perennial beds; a dining table suitable for summer feasts, and a small upholstered love seat, for curling up to read. The parents had their adult gatherings, like anniversary dinners or board meetings; the daughters acted out storybook narratives with friends – thus, the fairy house theme.

We started thinking about the idea of a book to collect and document these highly personal backyard destinations. The idea emerged from brainstorming with our friends, fellow writers, garden designers and graphic designer Marcy Stamper, who helped put a look and visual order to our proposal. The idea of Shed Style as a title emerged because we wanted to include projects that were not just garden-focused. This is where Sarah Jane Freymann, our wonderful literary agent, helped us brainstorm to broaden the concept.

Clarkson-Potter/Random House’s newly-appointed editor Doris Cooper agreed that we were onto something timely, creative and exciting. She told us she could envision her parents turning the old shack at their summer property into a wonderful reading shed. That’s exactly the type of project we want to feature in Shed Style.

Fast-forward to spring 07 – while we were on a marathon production schedule – and the book name was toyed around with during numerous brainstorming sessions. It was expanded, polished up and re-named Stylish Sheds and Elegant Hideaways. Although I have a secret preference for the simplicity and punch of Shed Style, I think the new, improved title works great!

And the change actually gives us the opportunity to use this blog — called SHED STYLE — to communicate about all sorts of ideas about designing garden spaces for outdoor pursuits.  So you’ll see information here on book-related appearances, events and news, but you’ll also find whatever strikes me as fitting company for the shed-owner’s (or shed-owner wanna-be’s) lifestyle.