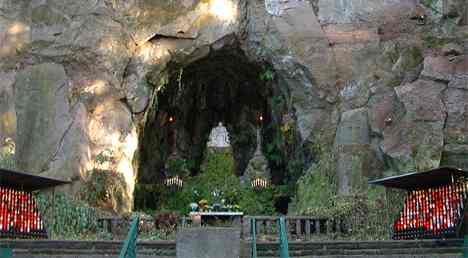 Grottoes are to gardeners as wine cellars are to oenophiles. They are dark, cool, mysterious, smelling pleasantly of the earth.

Even though I’ve read a few mystery plots involving grottoes that appear on the grounds of old European estates, the only real grotto I’ve toured is located in Portland (seen above).

I remember going to see it in the late 1970s when I was a junior or senior in high school. Portland’s “Grotto” is actually part of a Catholic shrine and 62-acre botanical garden. It was originally established as an early 20th Century monastery. Here’s some information from the web site, which is also the source of the photographs seen here: 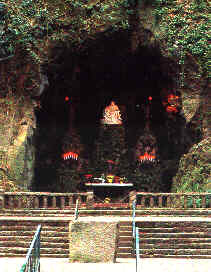 “Known affectionately as the Grotto, this lush 62-acre tract at Sandy Boulevard and NE 85th Avenue was once a rock quarry owned by the Union Pacific Railroad. The Order of Servants of Mary later acquired the property and created an urban oasis of gardens, sculptures, and shady paths.

The sanctuary’s central attraction is Our Lady’s Grotto, an altar dedicated to Mary, the mother of Jesus. The grotto was carved from a basalt cliff in 1923 and is now the setting for daily masses and special events such as the annual Blessing of the Animals (in July), when pets and their human companions fill the 600-seat outdoor chapel.”

I looked to history in search of the origins of a grotto. The Oxford Companion to Gardens devotes nearly three pages to this unusual stone cave or garden shelter:

“The primary distinction is between a natural covered opening in the earth and an artificial recess made to resemble a natural grotto; hence, art imitating and surpassing nature is a constant leitmotiv. . . .

The grotto is also associated with ornamental styles:

Is it possible to find a modern-day grotto in a residential garden?

In 2003, when I participated in the Hardy Plant Study Weekend hosted by the Hardy Plant Society of Oregon, I was delighted to discover a dark, alluring, dome-topped stone folly in the garden of Burl and Cindy Mostul of Rare Plant Research, a mostly wholesale nursery from which clever retail customers can often order cool tropical and desert plants. 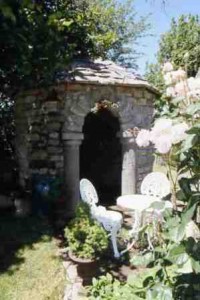 Oh, the folly! The interior of this little round structure, hand-built with mortared pieces of concrete and stone, was noticeably cooler than that toasty June afternoon climate. It was soothing and quiet. Once I entered, I really didn’t want to share it with anyone else.

The word “grotto” came to mind immediately, even though I’d only seen one other cave-like space made of stone. The presence of a stone wall and fanciful hand-built columns and arches reinforced the ancient feeling of the landscape (see below, top row).

I was seduced by the notion of hiding out there – inside the stone room – whenever I wished to escape from heat, humidity and bright light. A place for languishing, of course. 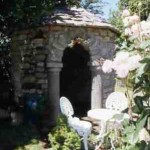 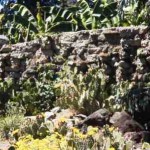 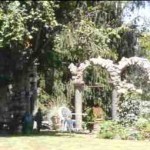 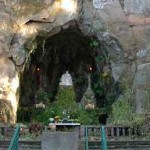 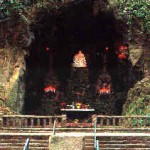 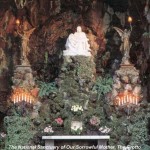 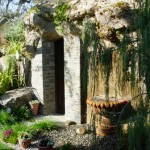 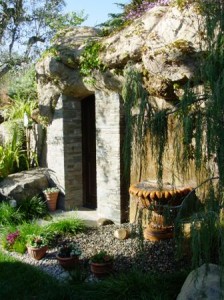 This past spring, I visited the garden of Robert Crudup, head of Valley Crest’s residential landscaping division here in Southern California.

He is an amateur winemaker, so it was a treat to see Robert’s personal wine “cave,” which he has built into the hillside behind his home in Newbury Park.

Like an ancient grotto, rediscovered for today’s practical purposes, the exterior is draped in vines and drips with water. Spilling from an unseen source in the hillside, the water fills a terra cotta urn and then cascades over the bowl’s rim to the stones below.

If this doesn’t say “grotto” to you, I don’t know what would!