A new addition to my Shedstyle Glossary: GAZEBO 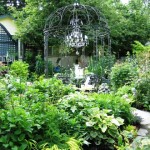 An updated Victorian-inspired iron gazebo, in the Snohomish garden of Mindy Pettit 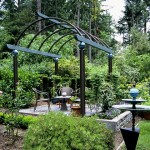 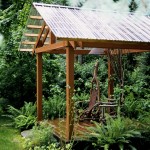 In the Curtain garden on Bainbridge Island, a “rain” gazebo stands at the edge of a wooded area. 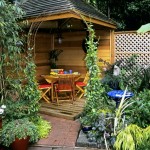 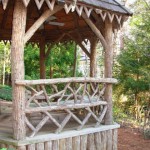 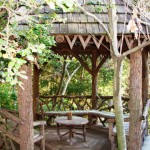 Does the word GAZEBO really come from the phrase “to gaze about”?

I’ve heard this many times, so let me share what a few references say:

May come from “gaze-about”; a look-out turret on a building, and from that, an open summer house, especially one with a second-story viewing platform.

Gazebo: Facetious Latin for ‘I will gaze’, is a structure from which one may ‘gaze out’ over a garden. It is either an elevated room placed on an existing natural small vantage point, or a main room constructed on the first floor of a brick or stone garden building.

And something a little more contemporary:

Gazebos are garden shelters with open sides, rather than walls, interrupted only by the posts that support the roofing. Sometimes found in private gardens, but more commonly seen in public parks, these little works of art, whether circular, square, or hexagonal, are both decorative features and shelters. Some models don’t have a solid roof but, rather like pergolas, are topped with a metal or wooden framework meant to be covered with climbing plants, whose foliage more or less hides the structure – offering a privacy quite sought after, of old, for romantic interludes.

—A Shelter in the Garden, by Pierre Nessmann

Famed landscape designer James van Sweden, discusses gazebos in Architecture in the Garden, but he lumps the term with other outdoor structures, confusing me a little. But I do like his explanation of how any small outdoor building is a landscape design device:

Works of Fancy: Arbors, gazebos, pergolas, trellises – all such open structures make wonderful additions to the garden, especially when covered with climbing shrubs or vines. They’re like icing on the cake after the hard work of planning, building, and planting a garden.

A work of fancy, or what is sometimes rather unfairly called a “folly,” can serve many purposes other than the obvious one of creating a shady retreat. It may be the centerpiece of your garden or the foil that directs visitor’s attention to a piece of sculpture, a fountain, a specimen plant or some other garden attraction. If space is limited, a gazebo or pergola may be used to imply a greater depth by directing views to distant attractions.

–Architecture in the Garden, by James van Sweden