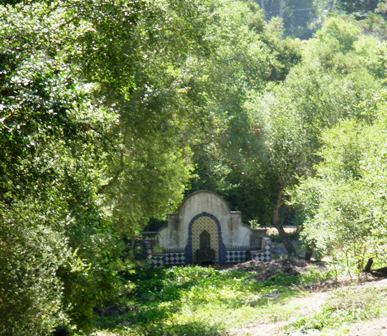 A Spanish-inspired Exedra: Standing apart from the dwelling and lying widely open

The word sounds a little something you might take when you have a headache, but according to The Oxford Companion to Gardens, an Exedra is also a feature shed-lovers might want to know about.

The Greek word Exedra was first applied to “a building standing apart from the dwelling itself and lying widely open.” Later, it was used more specifically to designate any kind of hall opening on a portico, in gymnasiums, palaestras, and private houses in Greece. These halls, accessible to the light of the sun and the moon, were furnished with seats and used by ‘philosophers, rhetors, and generally scholars.’

Exedras were introduced in Roman architecture at the same time as public and private peristyles (columned porches). They are also called “scholae” (places for leisure). In Roman gardens, some exedras were built independently from the rest of the villa, and placed on the edge of a boulder. The side walls were decorated with painted pictures of theatre scenery (of tragic, comic, or satirical character). The dominant peculiarity of an exedra is its permeability to its surroundings. In Roman garden architecture, exedras play a part similar to the loggias of the Italian villas of the Renaissance.

What might a modern-day Exedra look like? It could be something as dazzling as Patrick Anderson’s golden stucco garden pavilion, featured in the pages of Stylish Sheds and Elegant Hideaways. He and friends jokingly describe it as the “Taj Mahal.” Patrick situated the pavilion in his 2-acre cactus and succulent garden beyond San Diego so that it could be seen from house and garden alike.

He designed the structure with two open sides, capturing views of his exotic plantings and distant hills. The remaining sides face neighboring properties, so they are walled to create privacy, although small arched windows provide a glimpse of sculpture and plants beyond. Here is one of Bill Wright’s dazzling photographs of Patrick’s “Extravagant Gesture,” which is his chapter is titled: 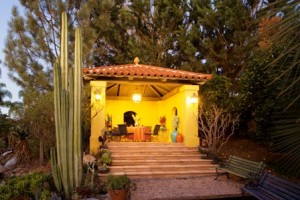 Designed by Patrick Anderson for the garden he shares with Les Olson. [William Wright photo]

Of this magical place, Patrick says: “When we entertain, we go ‘on safari.’ We have a set of picnic baskets and when guests arrive, they each grab something and we stroll through the garden to the pavilion. We enjoy cocktails and hors d’oeuvres and watch the sun go down and the moon come up.” 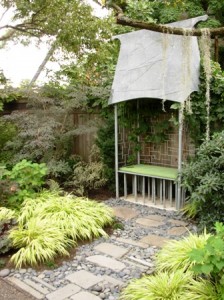 I spotted another adaptation of an Exedra design while touring residential gardens in Portland two weekends ago. The local arrangements committee of the Garden Writers Association lined up some exciting little Edens for us to visit.

At “Lilyvilla Garden,” we encountered talented artist-designer Lauren Hall-Behrens, who has transformed her urban backyard in just four years, infusing a Pan-Asian/tropical mood beyond her Portland bungalow. We loved every aspect of the garden, and I was particularly drawn to a little mini-Exedra (shall we call it that?), a garden bench with a roof, set apart from the house, porch, pathways and patio. Made from galvanized metal, the little structure meets the ancient definition of an Exedra: Standing apart from the dwelling and lying widely open.

And most of all, it offers respite for those who would like to sit and ponder the beauty of nature, Lauren’s artistry and the simple gift of rest.