A garden writer's passion for handmade creativity inspires her to launch a virtual gathering of garden artists and crafters.

Written and produced by Debra Prinzing 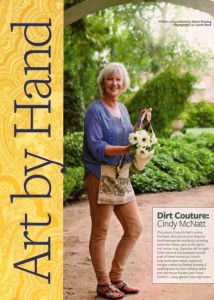 Cindy McNatt, founder of the online boutique called Dirtcouture.com, posed for us in her Southern California garden. She’s wearing a work apron and holding one of her canvas garden trugs.

Imagine finding the best garden artists and crafters around the United States without having to travel beyond your own backyard. Thanks to an Internet-savvy trend-spotter, you can now do just that. Cindy McNatt, a Santa Ana, California-based garden writer and blogger, is a crafters’ curator who showcases hundreds of one-of-a-kind items at Dirtcouture.com, her online garden boutique. With the click of a mouse, you can connect with a world of kindred spirits who make beautiful and functional garden products by hand.

Many of these folks operate from their kitchens, basements or potting sheds where they’ve honed their skills for years. They sell locally, to customers at art shows or garden festivals. Some even have their own online shops. But reaching a wider audience of fans hasn’t always been easy for them — that is, not until early 2010, when McNatt launched her business. Rather than marketing mass-produced or factory-made fare, her e-store showcases small-scale studios and workshops where human hands craft high-quality items one at a time.

“In most handcrafted marketplaces on the Internet, the whole garden category gets buried,” McNatt explains. “I thought, Let’s bring some of the best garden artisans out front and in the face of their customers. That’s what Dirt Couture is – a resource for gardeners.”

Dirt Couture’s first product is still one of its bestsellers: Hose Clothes, McNatt’s clever slipcover for an otherwise unsightly garden hose – stitched from stretchy swimsuit fabric. After seeing Hose Clothes, customers asked for more products, and McNatt began seeking other crafty types who, like her, take inspiration from their own gardens, wildlife or nature. She’s collected the work of more than 100 artists coast-to-coast, plus a few from Europe, at her easy-to-surf site. With handmade items for indoors and outdoors — accessories forbirding and pets, products for bath and body, clothing, fine art and home decor, tools and gear, and even a quirky category called Gnome Central — it’s like Etsy for garden lovers.

A lifelong gardener, McNatt says she’s a lot like Dirt Couture’s customers: She loves handwrought objects, accessories and artwork — and the stories they tell. Occasionally, to fulfill a specific request, she creates products, such as wooden labels that urge a plant to “bloom, dammit!” or a wedding seed kit. She also encourages other crafters to fill needs for customers, such as lightweight hypertufa pots and seed-starting kits.

Each artisan’s story is unique. Meet a few of the many talented Dirtcouture.com artists: 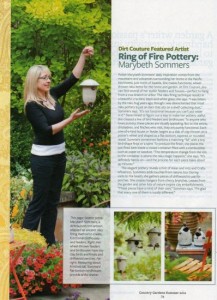 Potter Marybeth Sommers’ daily inspiration comes from the mountains and volcanoes surrounding her home in the Pacific Northwest, just north of Seattle. She makes functional, wheel-thrown Raku items for the home and garden. At Dirt Couture, you can find several of her stylish feeders and houses – perfect to hang from a tree branch or arbor.

The Raku firing technique results in a beautiful crackled, black-and-white glaze, she says. “I was bitten by the Raku bug years ago, though I was disenchanted that most Raku pottery is just an item that sits on a shelf collecting dust,” Sommers says. “It’s not functional because you can’t put water in.”

Determined to figure out a way to make her pottery useful, she created a line of bird feeders and birdhouses. To anyone who loves pottery, these pieces are visually appealing. To the wrens, chickadees and finches who visit, they are purely functional.

Each one-of-a-kind house or feeder begins as a slab of clay thrown on a potter’s wheel and shaped as a flat-bottomed, tapered or rounded vessel. Sommers sometimes fashions a matching “lid” with a tiny bird-shaped finial or a spire. To produce the finish, she places the just-fired item inside a closed container filled with a combustible such as paper or sawdust. “The temperature change from the kiln to the container is where the Raku magic happens,” she explains.  “It’s definitely hands-on — and the process for each piece takes about 45 minutes.”

The elegant pottery reveals a hint of Asian and Arts and Crafts influences. Sommers adds touches from nature, too. During visits to the beach, she gathers pieces of driftwood to use for perches. She creates hangers from cherry branches. Leaves from the garden and other bits of nature inspire clay embellishments.

“These pieces have a mind of their own,” Sommers says. “I’m glad that every one of them is totally different.” 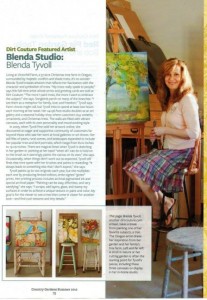 Blenda Tyvoll takes a break from painting one of her favorite subjects, a tree. The Oregon artist draws her inspiration from her garden and her family’s tree farm.

Living at Victorhill Farm, a 57-acre Christmas tree farm in Oregon, surrounded by majestic conifers and shade trees, it’s no wonder that Blenda Tyvoll creates artwork that reflects her fascination with the character and symbolism of trees. “My trees really speak to people,” says this full-time artist whose prints and greeting cards are sold at Dirt Couture. “The more I paint trees, the more I want to embrace the subject,” she says.

Songbirds perch on many of the branches: “I see them as a metaphor for family, love and freedom,” Tyvoll says.

Farm chores may call, but Tyvoll tries to spend at least two hours each morning at her easel. Her 24-by-36 foot studio doubles as an art gallery and a seasonal holiday shop where customers buy wreaths, ornaments and Christmas trees. The walls are filled with vibrant canvases, each of which has its own personality and mood-evoking style.

In 2005, when Tyvoll first sold her artwork online, she discovered an eager and supportive community of customers far beyond those who saw her work at local galleries or art shows. Her still lifes of pears, rural scenes and landscapes expanded to include the popular tree-and-bird portraits, which range from 8- by-10 inches to 13-by-19 inches.

There are magical times when Tyvoll is sketching in her garden or painting at her easel “when all I can do is hold onto the brush as it seemingly paints the canvas on its own,” she says. Occasionally, when things don’t work out as expected, Tyvoll still finds that time spent with her brushes and paints is rewarding: “It always leads to something else that I don’t expect,” she says.

Tyvoll paints up to 100 originals each year, but she multiplies each one by producing limited-edition, artist-signed “giclee” prints. Her printing process includes archival pigmented ink and special archival paper.

“Painting can be easy, effortless and very satisfying,” she says. “I scrape, add layers, glaze and stamp my surfaces in order to achieve a unique texture or paint and  color. My goal is for the viewer to see a tree and then come in closer for another look – and find cool textures and tiny details.” 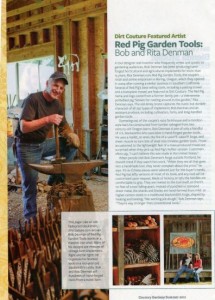 Like an old-fashioned blacksmith, Dirtcouture.com artisan Bob Denman of Red Pig Garden Tools, works at a massive iron anvil. He hand-forges durable and timeless tools for the garden.

A tool designer and inventor who frequently writes and speaks to gardening audiences, Bob Denman has been producing hand-forged horticultural and agricultural implements for more than 15 years. Rita Denman runs Red Pig Garden Tools, the couple’s retail and online emporium in Boring, Oregon, which they opened in 2004 after running a similar business in Southern California. Several of Red Pig’s bestselling tools, including a potting trowel and a transplant trowel, are featured on Dirt Couture.

The Red Pig name and logo come from a former family pet  – a Vietnamese potbellied pig “known for rooting around in the garden,” Rita Denman says. The old-timey brand captures the rustic but durable character of all 250 types of implements Bob Denman and an assistant produce, including cultivators, forks and long-handled garden tools.

Operating out of the couple’s 1903 farmhouse and a monitor-style barn he constructed from lumber salvaged from two century-old Oregon barns, Bob Denman is one of only a handful of U.S. blacksmiths who specialize in hand-forged garden tools. He uses a mallet, an anvil, the fire of a 1,200- to 1,600-degree forge, and sheer muscle to turn bits of steel into timeless garden tools.

Those accustomed to the lightweight feel of a mass-produced trowel are surprised when they pick up Red Pig’s heftier version. Customers often say, “I can’t believe this was made in the United States.”

When people visit Bob Denman’s forge outside Portland, he doesn’t mind if they watch him work. “When they see all that goes into a handmade tool, they never complain about the price,” he says. It’s as if these pieces were tailored just for the buyer’s hands. Red Pig has lefty versions of most of its tools and any tool will be customized upon request. Made of hickory or ash, the handles are comfortable to grip. They are riveted to the tool itself, so there’s no fear of things falling apart. Instead of punched or stamped sheet metal, the shanks and blades are hand-formed from mild- or higher-carbon steels in a traditional blacksmith’s forge, shaped by heating and beating, “like working pie dough,” Bob Denman says. “They’re way stronger than conventional tools.”