With a full spectrum of hues, shapes and sizes, this dramatic flower looks great in the border - and the vase

HERE IS MY ORIGINAL VERSION OF THE ARTICLE 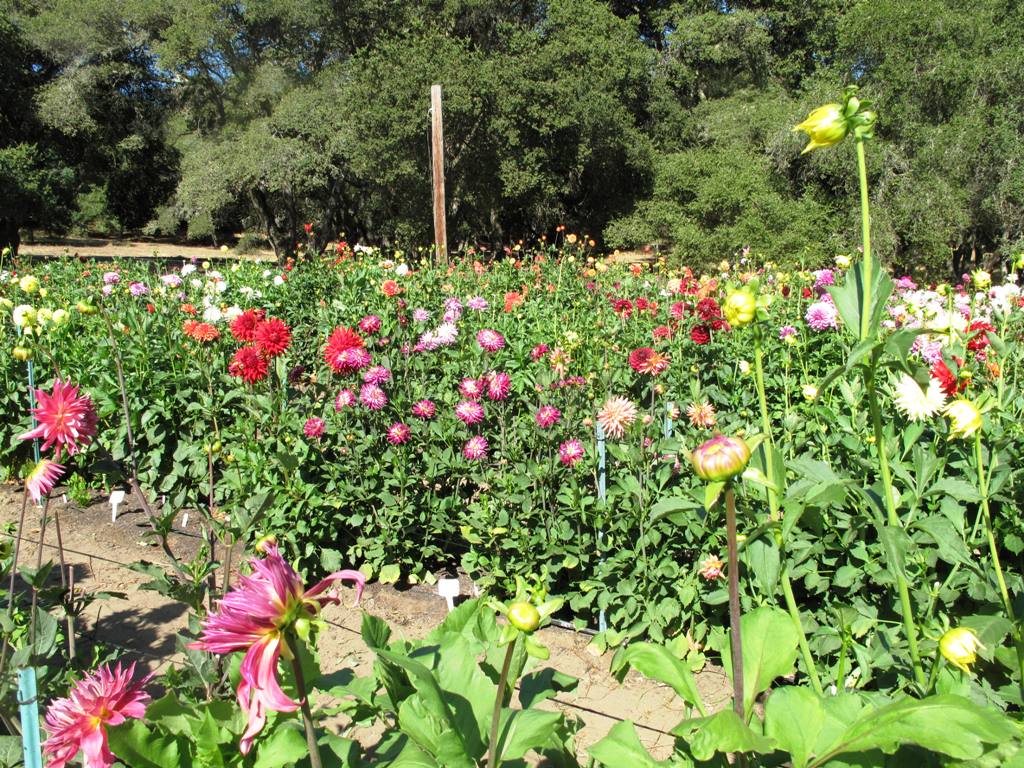 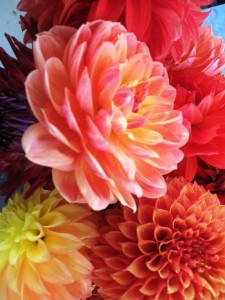 The color diversity of dahlias is simply irresistable.

The drama queens of late summer, dahlias have an eye-popping palette, amazing forms and architectural stature. They’re a striking alternative to the season’s more common flowers like mums or asters. Although it’s too late to plant tubers at this time of year, you can still find potted dahlias at garden centers – ready to plant immediately. Your dahlias will continue to bloom until the first frost, as late as Thanksgiving in some regions of the country.

“Dahlias come in so many colors, they flower profusely for months, are relatively easy to care for and are stunning – both in the garden and in arrangements,” says Kelly Sullivan of Botanique, a Seattle-based floral and landscape designer who specializes in cutting gardens.

Dahlias have a long history in the American backyard, having migrated here in the early 1800s, by way of the Aztecs, Spain and the rest of Europe. According to Scott Kunst of Old House Gardens, an Ann Arbor, Michigan-based mail order and Internet source for heirloom bulbs, the parentage of today’s hybrid varieties can be traced to three original wild dahlias, including Dahlia atropurpurea, which dates to 1789 and features a dark maroon flower, single petals and lacy foliage. Other popular old-timers include ‘Jersey’s Beauty’ (1923); ‘Sellwood Glory’ (1951); ‘Andries’ Orange’ (1936); ‘Clair de Lune’ (1946) and ‘Bishop of Llandaff’ (1927), a dark-foliage variety.

“The past is a great place to find fabulous dahlias,” Kunst says. “The ones that have survived the test of time are typically strong, adaptable growers.”

Hardy in frost-free regions, the dahlia is a member of the daisy family (Asteraceae). Dahlia tubers, those sweet potato-looking clumps with an “eye” at one end, are actually modified stems that store nutrients and water underground while producing stunning blooms on tall, leafy stems. Flowers are formed by many petal-like ‘ray florets’ arranged around a center of ‘disk florets.’

Dahlia breeding has resulted in varieties with diverse petal shapes and sizes, ranging from miniature ball to frilly cactus to blooms the size of dinner plates. The American Dahlia Society (ADS) has organized modern-day dahlias into 19 flower forms, with added categories for color and size. Descriptions often borrow from other familiar flower shapes: water lily, peony, anemone and orchid.

According to Kevin Larkin, ADS president and owner of Corralitos Dahlias near Santa Cruz, California, there are many modern introductions that home gardeners should try growing. He singles out cultivars that have won recent awards of merit from the society, including ‘Eden Talos’, a bronze, semi-cactus form; ‘Leslie Renee’, a purple-lavender miniature-formal-decorative form; ‘Buster P’, a showy orange flower measuring up to 8-inches; and the U-2 micro series of miniature dahlias from legendary breeder Bill McClaren.

Dahlias prefer full or slightly filtered sunlight (ideally eight hours daily); they will grow lanky and produce fewer blooms in deep shade. Grow them en-masse for impact or integrate them with other sun-loving perennials to create a pleasing composition in beds and borders. They pair beautifully with other large-sized bloomers, plants that peak from late summer through fall, including sunflowers, zinnias, lilies, cosmos, helenium, rudbeckia, purple coneflower and ornamental grasses. The large-headed and taller varieties may require staking, especially in areas that receive summer rainfall (experts recommend staking plants 3-feet-tall or higher). Low-growing varieties (12- to 24-inches)  are good choices for borders and containers because they do not require staking.

“If you are looking for drama in the garden, giant dahlia blooms will certainly deliver, but if you are looking for lots of dahlias to cut for bouquets, I suggest you select from the smaller blooming varieties,” Larkin says. He prefers dahlias in the pom, ball and informal or formal decorative categories, all of which are long-lasting in arrangements.

Dahlias are easy to grow, especially if you know a few basics. Tubers are sold through mail-order outlets or retail nurseries and are typically planted in late spring or early summer, about the same time you plant tomatoes. They can be started indoors in one-gallon nursery pots (about 4-6 weeks before the last frost), then transplanted. Dahlias can also be planted from rooted cuttings, which generally bloom earlier than tuber-grown varieties and produce a new tuber for the following season.

Plant dahlias in light, fertile, well-drained soil. For gardens with heavy or clay-like soil, add organic compost or grow dahlias in raised beds. Amend soil prior to planting. Space tubers 18 to 24 inches apart in holes one foot deep and wide. Some experts say you do not need to fertilize dahlias until plants are one month old (after all, there’s a lot of energy stored in that tuber to jump-start initial growth); others recommend using a balanced fertilizer when planting. The overall health of your soil may determine which practice you adopt.

Rest the tuber horizontally with its eye, if visible, pointing up. If you are planting from a container, place the root cluster with the stem facing up – about 6 inches below ground level. More dahlias suffer from over-watering and over-feeding than anything else. If your soil is wet, do not water until the first shoots emerge. If your soil is dry, water once; then wait until growth appears. Feed dahlias with a water-soluble, low-nitrogen fertilizer until one month prior to the first frost. Products with excessive nitrogen will produce weak stems and small blooms (Dr. Earth carries a number of organic fertilizers suitable for blooming and flowering plants, www.drearth.com).

To improve flower production, try this tip from Hans Langeveld, co-founder of Longfield Gardens in Lakewood, N.J., a mail order bulb company: “Pinch the first flower bud on the center shoot. That will stimulate your plant to grow a lot more flowers.” The technique can also keep your plant from getting leggy or floppy.

Dahlias are cut-and-come-again perennials. As you harvest them for arrangements, they continue to produce more blooms, says Diane Szukovathy, a Mt. Vernon, Washington-based cut flower farmer. “I love to mix and match a number of different dahlia styles rather than combine them with similar ‘focal flowers.'” If you don’t wish to cut your dahlias for bouquets, you will need to remove (“dead-head”) spent flowers to encourage repeat blooms.

Slug damage may be your biggest pest concern, but only when the first tender shoots emerge. The best line of offense is hand removal and keeping the area around the base of your dahlia clean and tidy. “By May or June, your plants are large enough to outpace the slugs,” Szukovathy advises. She dismisses the myth that dahlias should be planted near edibles to keep slugs away. “The best pest-control approach for a home gardener is to add diversity of plants to encourage a

balance of beneficial insects to keep your garden healthy.”

Old House Gardens has shipped heirloom dahlia tubers to customers in all 50 states. You may not think that’s possible, since dahlia plants are winter hardy to Zones 9-11 (minimum temperatures of 25 to 50 degrees Fahrenheit). But many people are treating dahlias as annuals, planting new ones each year, say Kunst and fellow dahlia experts. If you want to save your tubers to replant next spring, try the tips outlined in the sidebar.

With their pleasing floral spectrum of intense hues and beautiful forms, it’s easy to see why America’s dahlia obsession has flourished over the years. Whether you add a shrub variety to a patio container or integrate your mixed border with larger dahlia varieties, this beloved flower is guaranteed to satisfy late-summer cravings for vivid, long-lasting blooms.

If you live in a region subject to freezing temperatures, you will need to take special care of dahlia tubers during the cold months. As fall arrives and dahlias begin dormancy, follow these steps from Swan Island Dahlias in Canby, Oregon (www.dahlias.com).

In the spring, you can replant the tubers after the last frost. Share or trade extras with other gardeners. For more details, visit the American Dahlia Society at www.dahlia.org.