"Six months of work was well worth the years of enjoyment we'll have hanging out with each other - and our dog Jackson - in the new backyard." 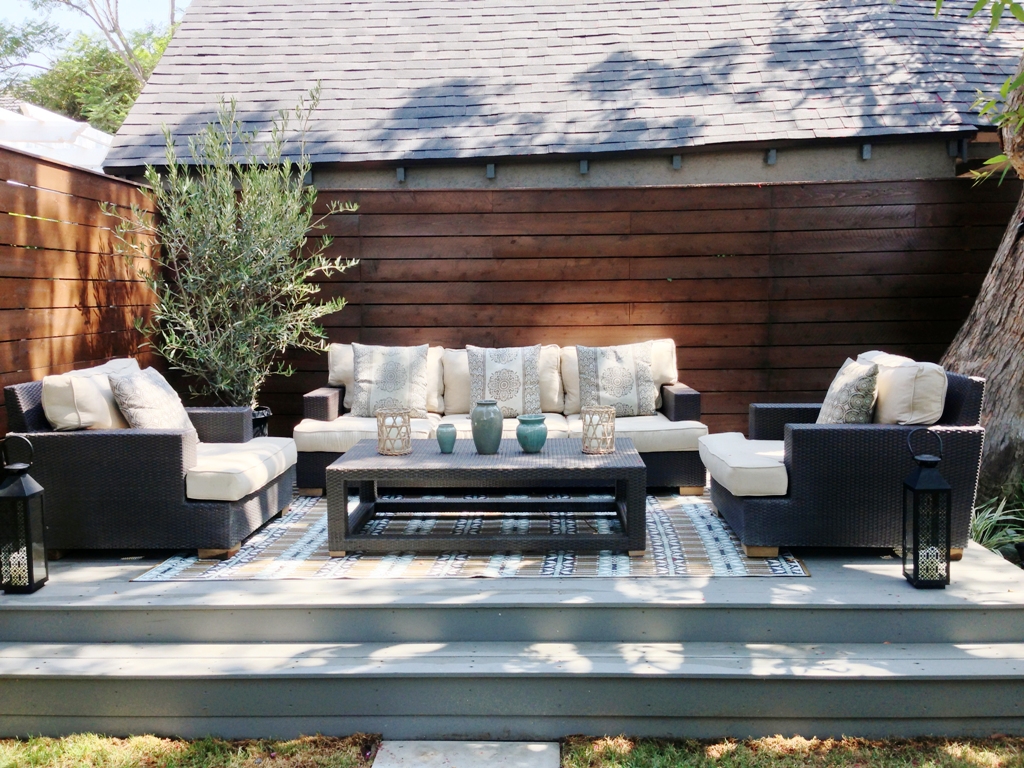 They didn’t intend to become do-it-yourselfers, but after consulting with a landscape architect who told them, “my gardens start at $50,000,” Michael Moore and Chad Rothman had a change of plans.

Moore, a senior legal executive, and Rothman, a creative director in marketing, both work in the entertainment industry. Seven years ago, they moved into a 1920s-Spanish-style home in the Brookside neighborhood, just south of Hancock Park. Since the house itself is only 1,500-square-feet in size, they were grateful for an attached deck, accessible from the living room.

Still, whenever they used the deck, the men found themselves staring at the vast and uninspiring backyard.

“We really liked the garden when we moved in, but over time we discovered we weren’t using it,” Rothman said of the existing “English country” plantings that eventually became overgrown and messy. 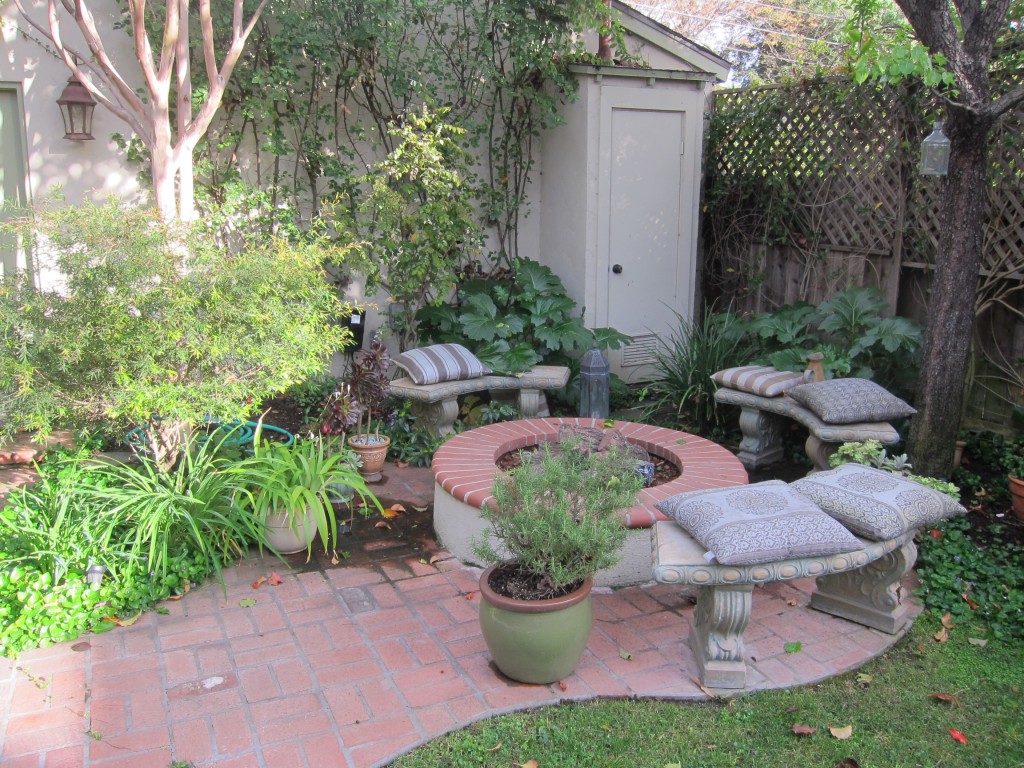 “Before,” a photo that Michael and Chad shared with me. There was nothing inviting about the hard concrete benches and the crowded plantings.

A garage occupied one-quarter of the yard, its stucco facade looming and blank. A raised circular fire pit, capped with brick and centered on a kidney-shaped brick patio, was surrounded by three uncomfortable stone benches. A second brick patio was shadowed by two Australian gum trees next to the north fence. “It didn’t look awful,” Moore said. “It just wasn’t us.”

Earlier this year, a windstorm knocked down one large section of fencing and the decision to replace the entire fence became the genesis of the entire backyard makeover. 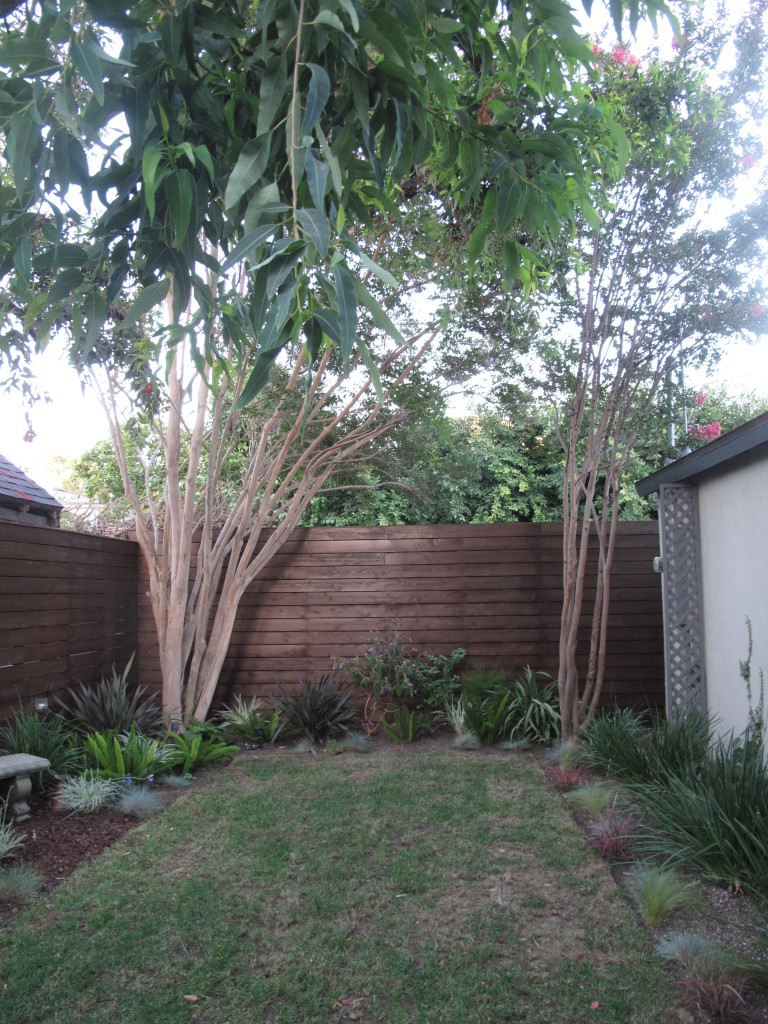 A brand new fence, built by Creole Walker of Creative Design Works, set the tone for the stylish renovations elsewhere in the garden.

Moore and Rothman met Creole Walker of Creative Design Works through the person flipping the house next door. “His estimate was one-third of the original one we got from a fence company, and he came highly recommended, so it was a no-brainer,” Rothman said.

Walker replaced the old vertical-slat fence with a new cedar fence using a running horizontal pattern, finished with a rich, dark-brown stain. “Suddenly, we had an amazing fence and everything else looked awful against it,” Moore said.

After hiring Walker to do the fine carpentry work, Rothman sketched a design with clean, linear geometry, eliminating all the curves. That meant all the brick had to go.

He and Moore spent hours breaking up the brick with sledgehammers. One of the areas covered in brick was a small flat pad between the two trees. The initial plan was to remove the brick and create a gravel-covered sitting area. But when one of the trees had to be removed, it allowed for a much larger area. The men decided to install a raised cedar deck instead of spending almost the same amount on brick removal. 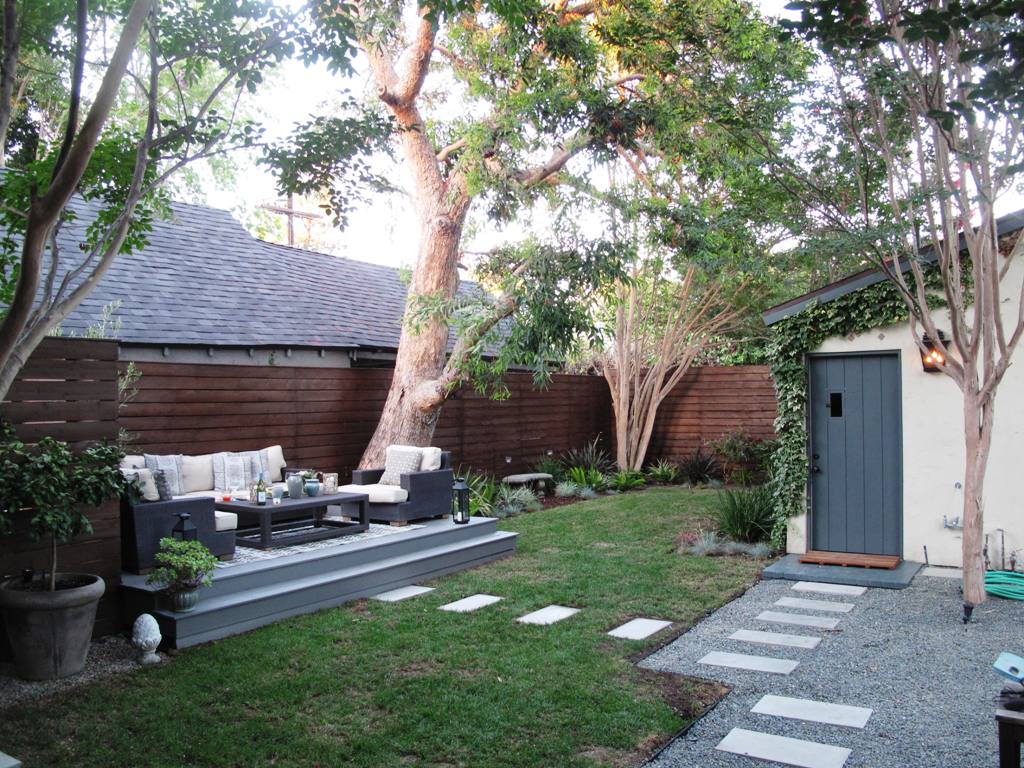 “That one decision created what is the centerpiece of the new yard – and also gave us 130 square feet of outdoor living area,” said Moore. The 9-by-14-foot deck is only slightly elevated above the new lawn, making it feel well integrated with the garden. Two steps ascend to a cozy seating area that has the perfect proportions of an indoor living room. Rather than invest in Ipe to match the home’s larger deck, they asked Walker to use redwood. Rothman chose a driftwood-gray stain similar to the color used on the railings of their upper deck.

That light-colored decking plays nicely with the gravel in the backyard’s other main entertaining area. Rothman and Moore worked with Bourget Bros. Building Materials in Santa Monica to find just the right color gravel. “It turns out there was only one quarry near Palm Springs that had the dark gray rock we wanted,” Moore said. Using buckets, they transferred 6,000 pounds of the crushed rock from a pile in their garage to its ultimate destination around the fire pit.

“Before,” a brick-capped fire pit. 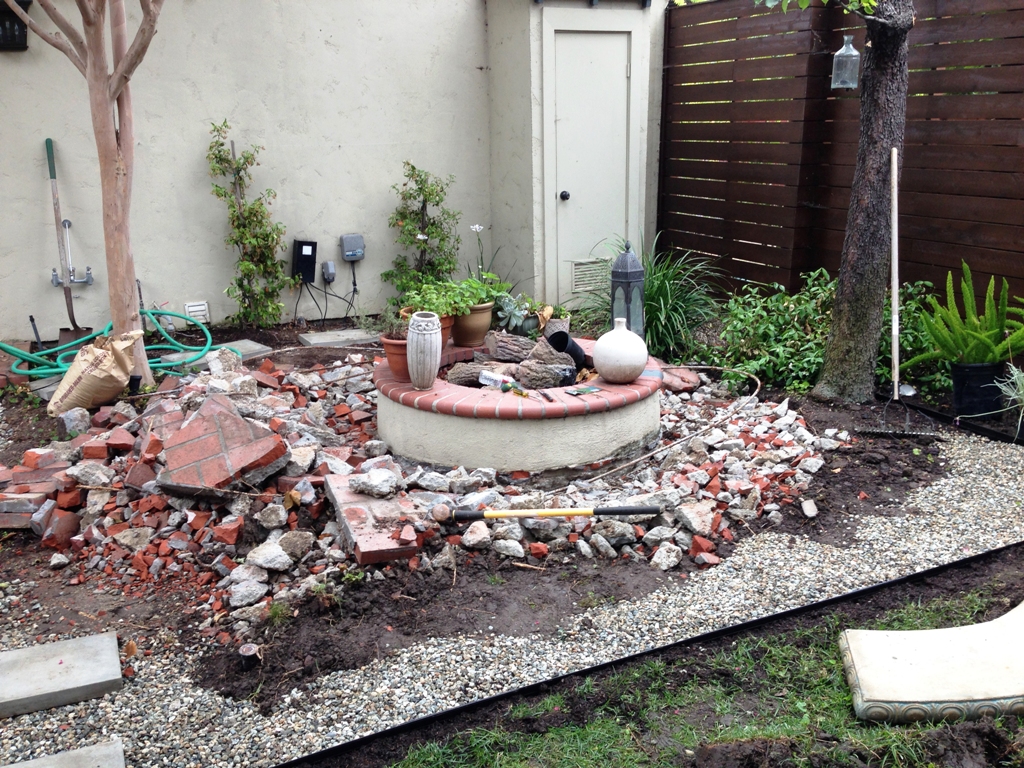 “Before,” mid-way through the demolition work, which Michael and Chad did themselves.

The fire pit wasn’t exactly located where they would have liked it to be, but it was already piped for gas, making it costly to rebuild. Another too-high bid, this time $4,000 to resurface the original brick, led Rothman and Moore to try a product they had seen advertised on HGTV. The surface bonding cement was easy to apply (once Moore had used a chisel and a disk grinder to cut and sand the existing stucco and brick surface). “We refinished the entire fire pit for $200 – plus a ton of our labor,” he said.

Daily checks on Craigslist helped them furnish the two entertaining areas. Moore first snagged a set of Restoration Hardware all-weather wicker just minutes after a Hollywood producer’s assistant posted it for sale. He found the powder-coated cast aluminum seating from another seller, paying one-third of the retail price. 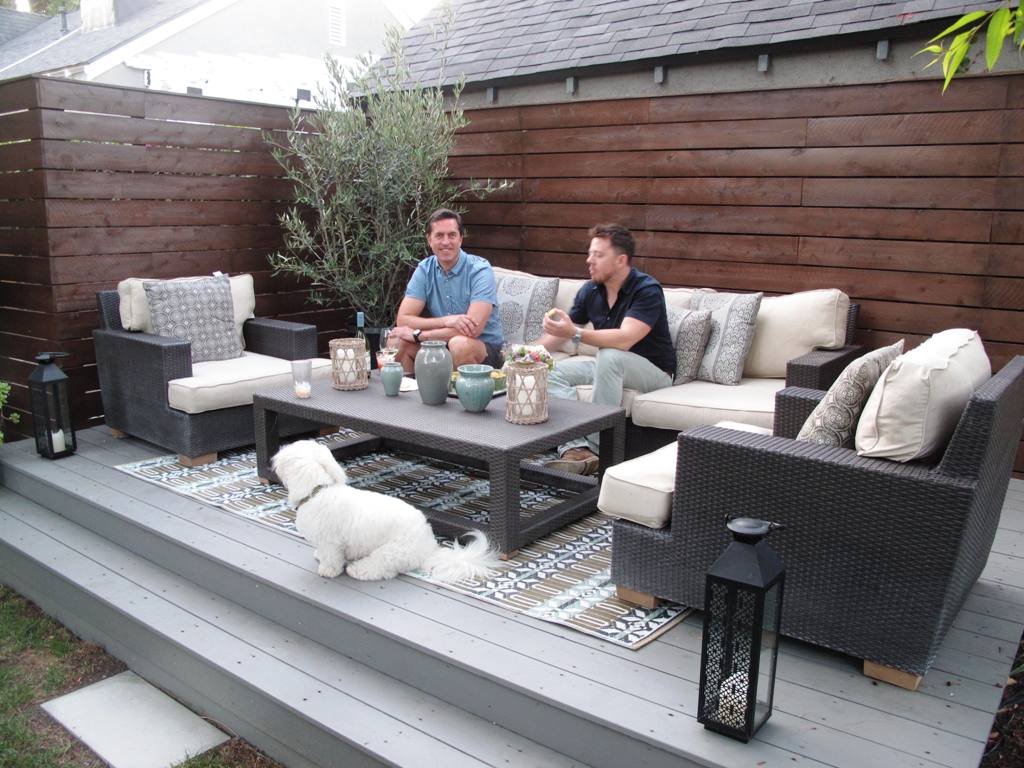 This is a garden success story! Previously wasted space now used for gathering with friends. Michael (left) with Chad and Jackson in the foreground.

When friends come to visit, the party starts with hors d’oeuvres and cocktails on the deck, where there’s plenty of seating even if a few people perch on the steps. After dark, the entourage moves to the fire pit area. The chairs are pivoted to face that once ugly garage wall. Now there’s a new storage cabinet-counter, which Walker built to match the fencing. It’s perfect for an outside bar and hides the gas and irrigation systems from view. And above it, the wall now doubles as a large outdoor screen for movie-watching.

Yes, they saved money (a fraction of that original landscape architect’s estimate). And yes, they spent most of their weekends since last spring working on the project. But the backyard makeover also taught Moore and Rothman how to get creative, source materials and use unfamiliar tools. “For someone like me who likes instant gratification, the long process definitely delayed my enjoyment of the final project,” Rothman said. “But it was worth every swing of the sledgehammer.”

And don’t forget togetherness, Moore adds. “Six months of work was well worth the years of enjoyment we’ll have hanging out with each other – and our dog Jackson – in the new backyard.”