Articles • Art Beneath the Open Sky

Art Beneath the Open Sky

A Bay Area couple combines a passion for collecting sculpture with a love of nature. 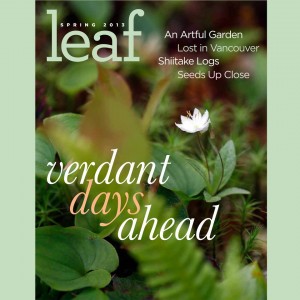 At its best, artwork triggers a full range of emotions – from delight and surprise to shock or even discomfort. And when it appears in a naturalistic setting, outside the walls of a conventional gallery or museum, art can evoke passionate feelings and communicate a strong sense of place.

At their 1.5-acre landscape in Lafayette, Calif., collectors Gail Giffen and Chris Pisarra have magnified these sensations, thanks to more than 35 individual works of art and sculpture (the total number keeps changing, because “we’ve never counted them,” jokes Chris).

This landscape offers a compelling lesson in selecting and placing artwork beneath an open sky. For those who visit, it’s nothing short of magical. “It’s our little hidden paradise and we enjoy seeing what a big surprise it is for people who enter,” he confides. 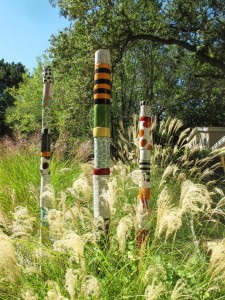 Over a 20-year period, Gail and Chris have populated the spaces in and around their home, swimming pool and guest house with an eclectic array of sculpture. They have befriended and supported countless artists, including Marsha Donahue, Mavis McClure, Topher Delany and Phil Glashoff, whose work ranges from the sublime to the playful. This outdoor gallery winks at anyone who takes themselves too seriously, says Chris. “We just have fun,” says Chris. “We buy art we like.”

The collection’s genesis dates to the mid-1990s when Gail completed a major renovation of a 1940s California ranch house original to the site. Building designer Reed Robbins transformed the existing structure into a Mediterranean-inspired residence with two new wings. The home’s entrance faced south, oriented toward a rather neglected piece of land, which prompted Gail to ask Oakland-based landscape architect Michael Thilgen, of Four Dimensions Landscape Co., to devise a new garden. A few trees were worth saving, including a valley oak and a Modesto ash, which after judicious pruning have continued to thrive, shading the home and providing a living canopy for outdoor patio and courtyard spaces. 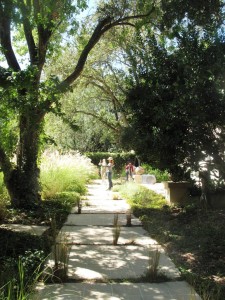 Entry path beneath the majestic trees

According to Thilgen, Gail was drawn to a classical Mediterranean aesthetic at a time when cottage gardens were all the rage. “She was attracted to doing something more architectural,” he explains.

Thilgen used two axial lines to divide the property, concrete pads that have a rhythmic (and permeable) break every few feet. One axis is parallel to the home’s facade and travels deep into the garden. At the midway point, aligned with the front door to the house, a second axis extends at a 90-degree angle, providing sightlines across the property. The intersecting paths work in tandem “to subdivide the landscape into different areas with different sizes and character,” Thilgen says.

In his original drawings for the garden, the designer identified places for sculpture at the terminus of each path. “It was a new idea for Gail. She was not a collector of art at the time, but I gave her a couple gallery names and it seems like she has never looked back since then,” Thilgen says. “Collecting has become a major part of Gail’s life. It’s the way she expresses herself and how she has shaped the place she lives.” 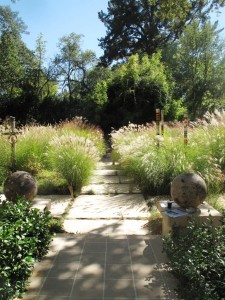 The dreamy view looking across the secondary axis into the garden.

The landscape has evolved over two decades, and is currently in the hands of B.J. Ledgerwood, APLD, owner of Native YardScape, who has been replacing aging perennials and shrubs with mostly native plant additions. The meadow-like mix of white and yellow flowering plants satisfies her clients’ preference for a neutral palette. “This is a garden where Gail and Chris can entertain, but they also want it to be restful to the eye,” she points out.

While the pathways form a grid that invite guests to navigate the garden, not all is seen at first glance. Dramatic stands of Miscanthus sinensis ‘Gracillimus’ soar upward toward the sky, promising a surprise around each corner. Ever-changing and dynamic, the grasses reach their peak in late summer and early fall, evoking a sense of mystery as one explores the artwork that is so well integrated. By late winter, ornamental grasses are cut back and the entire mood changes again, giving Gail and Chris a momentary perspective across their landscape.

Beyond the stands of tall grasses are two gathering places. 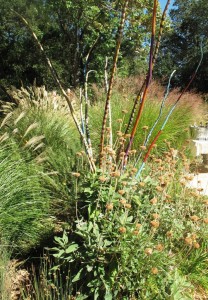 Branches with Color, by Jeff Rosendale

The first, glimpsed to the left of the entry walk, is carpeted in lawn and defined by a rustic, industrial cauldron, now a water feature. Once a play area for the child of this household (who is now a young adult), the area is intimate and serene. That is, until you happen upon a large grasshopper, a praying mantis and other metal insects, lending their distinct point of view to the scenery around them.

The second gathering place is centered around the swimming pool and guest house, also part of the original renovation. Mostly human-inspired sculpture occupies the sun deck or the pool’s perimeter, although “Amanda,” a bronze nude by Australian artist David McKay Harrison, reclines on the diving board.

This is a garden that possesses artwork, but one could argue that the artwork possesses its owners, as well.

“We don’t buy art because we’re thinking of making an investment,” Chris maintains. “The beauty of art is that it is something you will appreciate every day. These are pieces that you’re supposed to feel, you’re supposed to sense – not just with your eyes, but with your hands. That’s the biggest benefit of owning sculpture.”

More artwork to wow you: 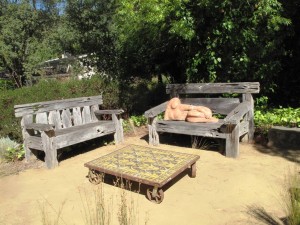 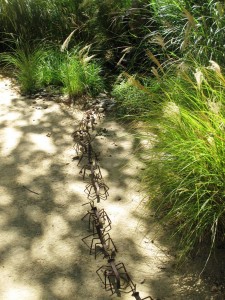 A whimsical trail of sculptural ants marches across the garden 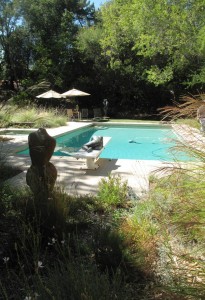 Art surrounds the pool and patio, including a lifesize figure on the diving board 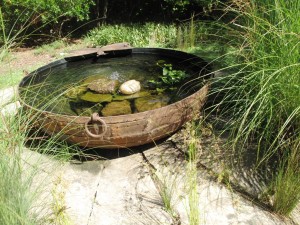