Neglected by time, a 1920s garden in Southern California gets a new life, thanks to its passionate owners 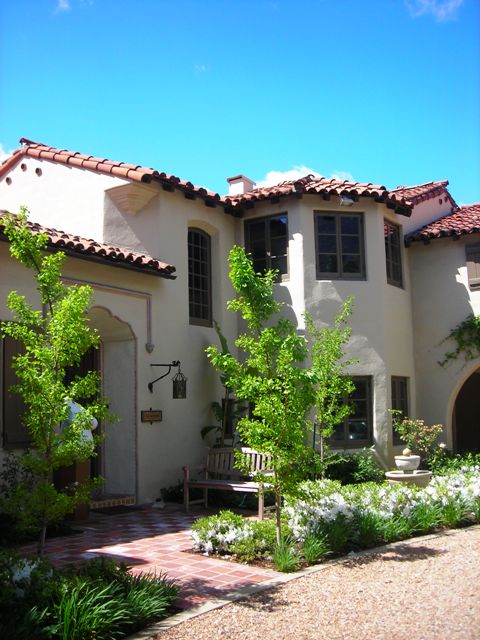 Cheryl and Robin brought dignity and charm back to this “grande dame” of 1925 Spanish Colonial Revival architecture – and its landscape.

In 1999, Cheryl Bode and Robin Colman discovered the house and garden they soon came to call Casa dos Mujeres (House of Two Women).

Prompted by the desire for more space as they combined their individual households, the two were drawn to Altadena, a village in unincorporated Los Angeles County wedged between Pasadena and the foothills of the San Gabriel Mountains.

“Cheryl went there on a lark with our real estate agent,” Robin recalls. “This house was in terrible shape, but part of it really captivated her.”

Later, when Cheryl returned with Robin in tow, she jumped up and down with joy when Robin pronounced: “I could live here.” 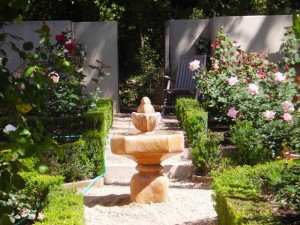 The crunchy gravel path bisects the rose beds and is interrupted (in a good way) by a small fountain.

Motivated to  save the aging 1925 Spanish Colonial Revival-style home and tame its landscape, Robin and Cheryl spent more than a decade on restorations. They reclaimed the property’s gracious character, so it is reminiscent of its origins . In doing so, they, too, have become rooted in the community. “It feels like you’re taking a step out of the hustle and bustle of city life,” says Robin.

The 4,000-square-foot, stucco-and-red-tile-roofed residence required extensive interior and exterior renovations. While much of the land once attached to the house had been subdivided and sold over time, three-quarters of an acre remained. 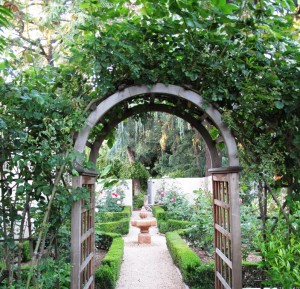 The arbor defines the entry into this beautiful garden room where scented roses flourish.

Cheryl and Robin didn’t consider themselves gardeners, but they knew the overgrown and debris-strewn yard needed to be cleaned up and redesigned. They turned to Pasadena-based garden designer Thomas Batcheller Cox for help.

“We had no idea what we were taking on,” says Robin. “We love it now, but we didn’t come in with our eyes wide open.”

Cox’s expertise has had a profound effect on the couple, who have relied on his design direction for more than a decade, Cheryl says. “We could not have done any of this garden without him. We continue to work with him today, which means this property is evolving into a mature garden.”
Renovated in phases over many years, the once unruly property  is now a series of nine garden rooms – from the front garden where  ginkgos flank the front door to the shade garden where clusters of more than twenty Daphne odora shrubs perfume the air. According to Cox, the landscape is defined by distinct, room-like features. “The floor, of course, is the lawn, terrace or patio, the path or walkway. The adjacent areas where plants grow form the shape of each particular room.”

Overhanging trees evoke the idea of a ceiling, while tall plants form “walls” that frame the sky view above, he explains, adding: 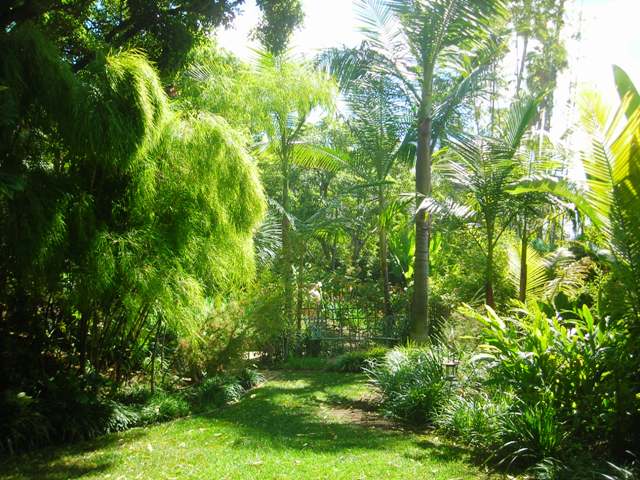 This is the killer shot that somehow never made it into the Horticulture magazine layout. The entire perimeter of the oval strolling lawn is enclosed with lush, verdant foliage.

“I love spaces that are softly enclosed so you can only barely see them.” 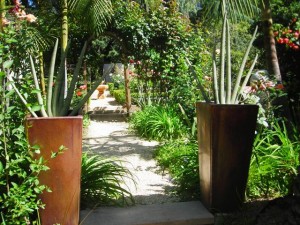 Focusing so much energy on her garden  turned Cheryl, who retired from a career in health care administration, into a plant-lover and collector. “I came to learn that I had a passion for gardening,” Cheryl says. ” I ask: Is it rare? Is it unusual? I want that special geranium or uncommon blue ginger — varieties I’ve never seen growing in a private garden.”

In consultation with Cox, Cheryl scours small specialty nurseries for just the right flowering azalea or rose cultivar. She is equally comfortable rattling off botanical names like a horticulturist or tending tomatoes, strawberries, and beans in the sunny kitchen garden. 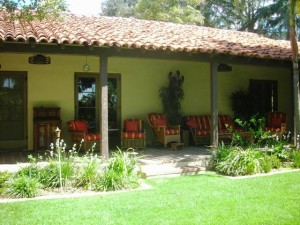 The covered veranda spans the central portion of the home, providing seating and connecting to the garden’s open-air patios and water feature on the opposite side of the lawn.

The restored residence has a deep, covered veranda that overlooks a strolling lawn, several outdoor dining areas and a formal pond. The new garden needed to be worthy of the home’s grand scale.  “We wanted it to look as if everything belonged here and was built by craftspeople from the 1920s,” Cheryl explains.

The spirit of that ethos begins in the walled rose garden, established along the home’s east perimeter in an area once covered in asphalt. A gate built from turned spindles (echoing the home’s original window trim) provides entry. Sand-colored Santa Rosa gravel crunches underfoot as you walk along the path, sidestep a small bubbling fountain at its center, and inhale the perfume of 32 rose shrubs (“I only grow roses that have fragrance,” Cheryl says.) 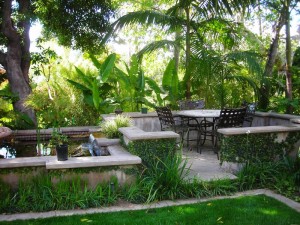 Two semienclosed dining patios provide intimate gathering spaces on either side of a tranquil water feature.

Upright stone ledges form the risers in a gravel path and staircase that descends from one level of the garden to the next. “The path goes down two little steps to an arch, which leads to the first terrace and connects with the upper lawn,” Cheryl explains. “Then it continues down five more steps to the lower garden.” From this main walkway, several narrower, undulating paths follow the topography of the land, leading to nearly-hidden seating areas. “You have to explore each and every aspect of this garden,” Cheryl says. “It’s not like you can stand in one place and have a panoramic view.”

Rather than considering the property’s gentle slope as a design challenge, the owners, designer and their contractor Tim Foster of Chaparral Landscaping all felt it was a strength. “We didn’t change the  topography of the land when we created this garden,” Cheryl points out. “So that laid a foundation for Tom and Tim to enhance and build upon.” 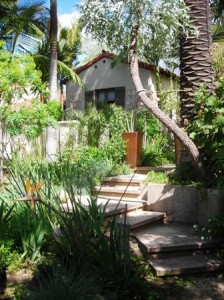 The journey continues to the southeast corner of the property; from here, you can see the home through the tree trunks.

Before it turns at the southeast corner of the property, the path loops around an octagonal bed, an important focal point where Cheryl and Tom have established a medallion-like tapestry of succulents, planted bands of bearded irises and added the unusual Strelitzia junacea, a type of bird of paradise. “That’s now our sunniest corner,” she says.

The journey continues to an oval strolling lawn, often used as a dance floor for summer soirees. Enclosed by bold-leafed rice- paper plants (Tetrapanax papyrifer), graceful swaths of Mexican weeping bamboo and other subtropical specimens, the enclosure “feels like a garden cathedral – now that’s the real meaning of a ‘room’,” Cox points out. “Containment makes it feel much larger.”

Though this side of the landscape borders a well-traveled street, it is quiet and feels private, thanks to a “living fence” of evergreen pyracantha shrubs, their espaliered branches supported by cables strung between metal fence posts.

Cheryl and Robin preserved as many old trees as possible, including several deodar cedars and sycamores. They nursed a vintage orchard back to health, although it took five years of 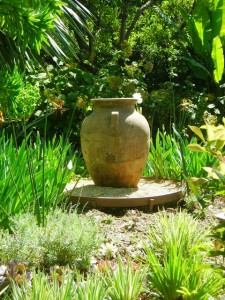 This fantastic urn stands at the center of the sunny octagonal bed.

proper irrigation and feeding for many of the citrus trees to resume fruit production. Trees in the southern-facing area, enjoyed from the kitchen window, include a Meyer lemon, Satsuma and navel oranges, low-chill plum, apricot and apple trees, as well as two persimmon trees.

“It does look like a jungle,” Cheryl laughs, looking out across the upper lawn (she once overheard a garden tour docent describe the garden as “controlled chaos.”). But it’s an almost-tamed one that provides fragrance, fruit and flowers to those who enter — and look up to view the sky.

Vibrant stands of tropical Heliconias come into view, their leaves creating a green hedge. Cheryl and Robin never tire of observing this scene. “First, I see the Texas redbud, then the princess palm and then giant bird-of-paradise. Even when we’re sitting still, there’s exploration, Cheryl explains.” 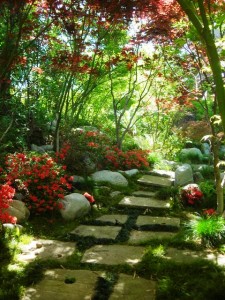 Deeper and deeper into the garden, the path continues to reveal beautiful surprises.

This botanical collection thrives in what Cheryl describes as Altadena’s unique microclimate. “Our summers are very hot; our winters are cold. The topography is such that we’re often encased in clouds in the winter.” Temperate-climate plants that won’t grow in nearby Pasadena seem to perform better in the foothills, she contends.

Beyond the oval lawn, stepping stones lead towards the deep shade of an old California sycamore, mature Pittosporum undulatum, Magnolia denudata  trees. Here, a restored pond is landscaped with ferns, hellebores, mondo grass and a trio of golden ginkgos (Gingko biloba), which Tom suggested adding to commemorate Cheryl’s late mother. The colors of spring appear: overhead in the blood-red foliage of several Japanese maples (including Acer palmatum ‘Red Blood’ and several dwarf, cut-leaf varieties that survive in dry Southern California only with some shade) and at one’s feet, in the salmon-pink flowering azaleas that line the path. Dappled sunlight animates the scene and it’s hard to imagine anyplace more peaceful.

“I don’t even really want to take vacations anymore, because it’s so beautiful here,” says Robin, a vice president at eBay Inc., who for the past five years has commuted from Southern California to Silicon Valley each week. “I come back on the weekends and I love just being home.”

Because the women feel they are stewards and caretakers of this special place, they frequently share it with friends and host benefit dinners for favorite charities. “We’ve been given the opportunity to return this ‘Grand Dame’ to how it was in 1925,” Cheryl adds. “It’s amazing to see what one garden can do. We want other people to enjoy it.” 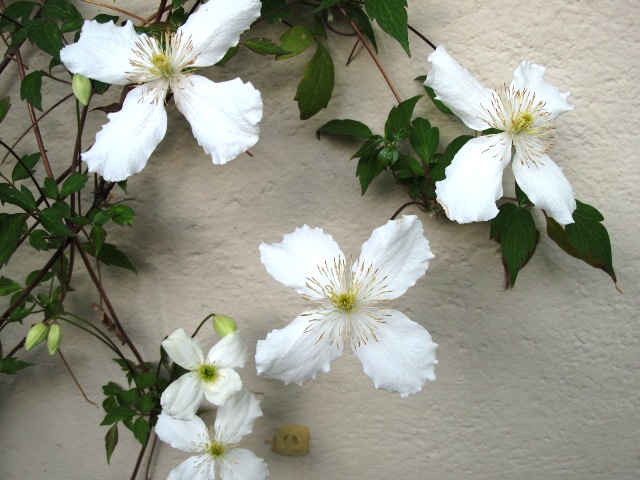 The white clematis strikes a beautiful grace note along the exterior wall of the veranda.